Probably there's something very simple I'm missing out, but search didn't really help. So I reckon I just don't see something.

We create a team, say for one of IT departments. This team has plenty of channels. Say 30+. Some for particular feature to work on, some general discussions. Etc. Question is how do I add members to new channels? Cause:

1. People won't browse a list of channels, it's too messy. At some point they just stop doing this.

2. Mentioning people might help but they need to star it. And if they don't they might miss out on important for them info. Asking everytime to star channels feels a bit odd.

Is there any easy way? Like in Slack you just type /invite @Dude.

Has this been added yet?  I don't see the ability to add certain people to certain channels within a Team.

@RSP_Nuance The feature is being rolled out gradually. Our tenant has had the ability to create private channels for about a month - you'll see an extra field on the channel creation dialog when it's there (unless your admin team have implemented a policy to hide it).

Because retention policies are not in place for private channels yet (no timeframe given), we have disabled creation in our tenancy except for admin/superusers.

You can, but you have to create a new channel you can't edit an existing channel which I'm assuming you might be trying to do. When creating a new channel, on the bottom is a drop down for channel type, if you have this option, changing it to private allows you to customize permission for the channel, but if not, then as Mike said you have to make sure it's enabled in the admin center and if still not available might not be rolled out to your tenant / tenant type yet.
0 Likes
Reply

I understand that you don't need to add members to a channel. By default, all members have access to all channels in the teams they were a member of.

My problem is that created a channel for each project. I was trying to organise a project meeting and invite the project members. If I choose that project channel as the attendee, it invites the entire team member. So I have to invite the members individually. Besides, we don't have Microsoft Streams enabled in our corporate environment. The meeting recordings cannot be saved and has 20 days expiry dates instead. I'd like to see it stored in the File tab of that channel.

I'm part of a sub-group exploring virtual meetings for my organization.  As part of that we are looking at Microsoft Teams.  Within the first 5 minutes of using it, and creating my first team, that would basically be my organization, I created a channel and looked to add just certain members to it.  Of course, when I couldn't find out how to do that I googled it and came across this thread telling me, what I suspected, that it couldn't be done.

But, really got me is that the thread is from 2018 saying it was such a popular request that Microsoft was looking to do that.  And yet, here we are about 2 years later and it still doesn't exist.

@Stu_the_K I am have had the same issue, I noticed that when you initially set up the channel it will give you an option to privatize the channel.  See below: 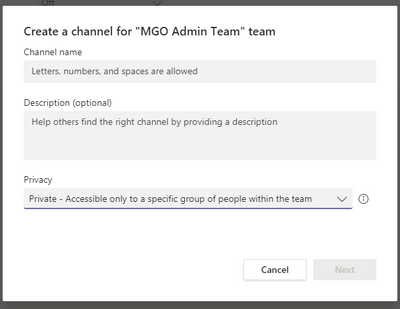 For your current issue:

You could create the channel again, make the settings private when initially setting the channel up, move all your folders to the new private channel and then add your members from there. This is the only thing that worked for me.

@Stu_the_K  The list of popular requests is very long, the size of dev teams finite and the ability to integrate all requests into a coherent architecture that integrates with existing features is limited.  A Team contains email inboxes, sharepoint storage, calendars and other resources. Permissioning is a nuanced activity even when working just on storage. How it pertains to the other elements is even more subtle.  Private channels created their own independent sharepoint storage that does not inherit from the parent Team sharepoint site. Channels with "wormholed" membership would require that and more - e.g. how do unique members access group resources - are they included in the calendar? in group emails? in Planner groups?

How to add a member to a team in YTEAMS

Yes, that is true, but you could have the infrastructure that is used for a private channel, but just make it non-private. Call it a guest opened channel or so.
So by creating a channel you need to decied, if it is a in-team only channel, a private channel, or a channel open for the team, plus people, you only wanna add to that channel.

People, already in that team can decied, if they wanna join this type of channel, because they are able to see it (other than the private channel, where only the channel owner can add someone). When they do so, they are added to the new underlying SharePoint, and if they decied to leave it, it's like hiding a channel. It's still there, but you are not in it anymore

@Michael Goth You've simply restated the need for a wormholed channel, but haven't stated how you deal with the other Team infrastructure that I mentioned such as underlying group membership. Channels aren't just sharepoint sites.

Essentially this feature needs a group within a group, although groups don't support nesting, so there is quite a lot of infrastructure redesign needed to make that happen.

Hi Scot
As it currently stands, to add a member to a particular channel, you first need to add them to the team. So by default all members will see the 'General' channel and whatever channel they have been added to. It's not ideal, but I've found it works for what I do.
Hope this helps.

My use case is this, I have small group of people that need to conduct a foccused work in a Team. I created a channel for them in this team. I want their work to be public to others in the Team, in case someone notices something and decide to chime in, since the Team has already specific specialists in an area. But I want to be able to say @ channel  and specify the people that are actually the selected ones to conduct this group task and which are supposed to share documents and messages in this channel. Currently I need to nominate each one directly to be able to comunicate.

Thanks @Chris Webb , I am using tags. What I would like is having people able to read but not write in the said channel too.

You can right click the channel and moderation and set it so only certain people can create new posts and or reply to threads.
0 Likes
Reply

@Chris Webb did Microsoft created a feature to add a team member in Channels?

When was it rolled out?  What version of Teams has this feature.  This lack of this ability, affects a "adopt or drop" scenario.  Thank you.

Been out well over a year. You have to be an owner to set channel settings where you can find moderation settings.
0 Likes
Reply

Can Not Add Team Member

It's not all about the data! Protecting Your Users in Teams with Communications Compliance

Bringing large groups and communities together in Teams