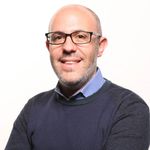 Last Ignite I attended the 2018 edition of this device session, Teams devices were in full swing but one year on and it’s quite amazing to see how much things have changed and the new additions to the portfolio.

The session kicks off with an intro from Sandhya Rao, her focus is on personal devices which also includes USB peripherals and endpoints powered by Android i.e. Teams IP Phones and now the newly announced category of collaboration bars for Microsoft Teams – more on that later.

The session is also co-presented by Greg Baribault who is responsible for shared room devices, this includes products that run the Microsoft Teams Room (MTR) platform and more recently the Teams integration for Surface Hub. This is welcome news as it previously felt that Surface Hub’s integration with Teams was a little disjointed, we’ll learn on how this has changed as a result of this cross-Microsoft BU partnership.

Together both Sandhya and Greg are focused on Microsoft’s overall vision for how customers unlock communications, teamwork and collaboration with their employees. Across individual and group workspaces. 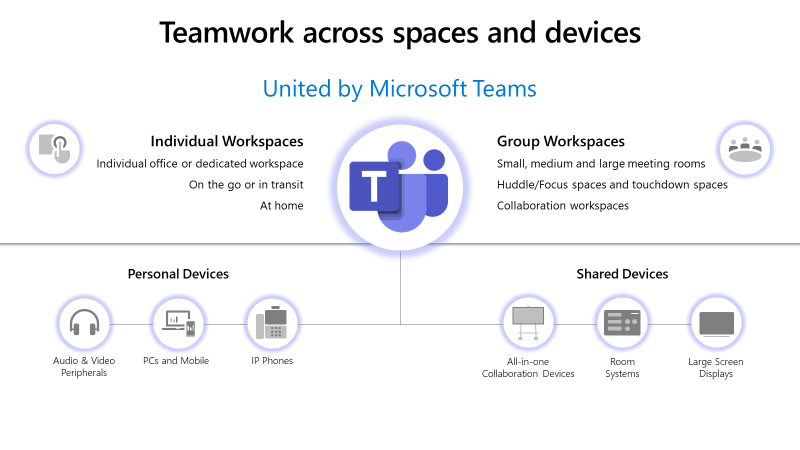 We hear about the changes to Microsoft’s rigorous certification program (I know about this first hand!), these new changes to the program, known to partners as version 4, now include both Teams and Skype for Business. Once change of which is reflected by a Teams button on USB peripherals, this in turn provides users with easy access to quick Teams actions such as joining a meeting or even returning a missed call. 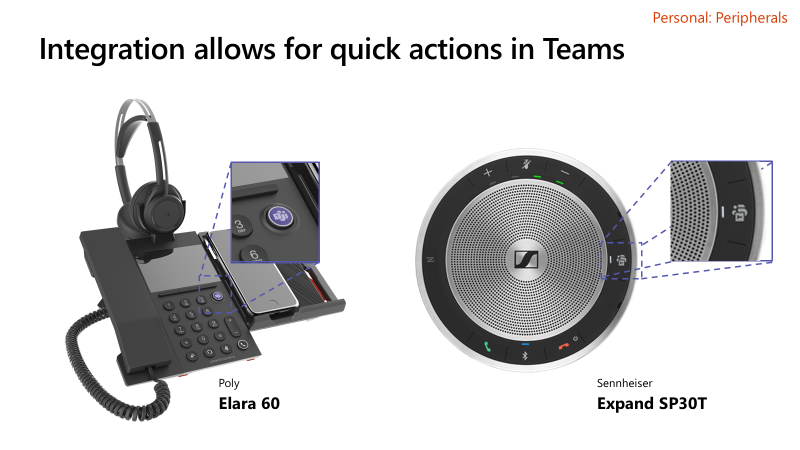 New speakerphone pucks are on show from Jabra, Poly, Sennheiser and Yealink – all including their respective Teams buttons. Headsets have also started going through the same treatment, with devices available for open office, on-the-go and personal desktop environments.

Next up, desk phones. These are commonly regarded as devices that are on the decline, we see evidence from analyst Synergy Reports that this is in fact untrue. This category is growing by 5% YoY with 20.5 million desk phone sales in 2018. Also, conference phones are growing by 30% YoY with 500k sold in 2018. The other interesting point being that phones rather than being swapped out every 10 years are now being refreshed every 1-3 years.

The good news for customers moving to Teams is that their existing investment in Skype for Business phones can either be upgraded to Teams (where Android-capable) or (where Linux-based) can leverage the Microsoft Teams voice gateway until mid-2023.

The next slide shows a new range of native Teams phones from Poly the “CCX Portfolio”, with a 400, 500 and 600, these are starting to ship in December 2019. A new option here is the ability to order the 500 or 600 without a handset, therefore saving desk real-estate for end users that prefer to go handsfree and leverage a headset or the embedded speakerphone.

Microsoft’s Teams IP Phone software offers some new features with hotdesking coming later this month, this gives users the ability to switch a phone from a common area profile to their own identity and then back to its original state once they’re finished. Also coming soon is Dynamic E911 and emergency calling via the lock screen – giving users the ability to make emergency calls without the need to unlock the device.

Call out to the Teams devices catalogue available via Office.com/TeamsDevices. Next up we learn more about a new category of devices, collaboration bars for Microsoft Teams. A simple way for customers to add Teams Meetings to any room, easy to install on any display and manage within the Teams Admin Center. These devices are an all-in-one solution, which include the compute, mic/speaker and camera. These Android-based devices can be controlled via touch, remote, or wand control. Devices are announced from Poly (X30 and X50) and Yealink (VC210). This new set of devices will be great for exec, huddle and small room scenarios. Microsoft Teams Room has been in market for a few years now, previously known as Skype Room System V2, this platform has seen a number of iterations. Initially the compute was housed within a dock with a Microsoft Surface Pro, then additional center of table compute and audio-integrated devices came to market. More recently the compute can now be situated within the front of room screens with a separate table top controller used to drive meetings. It should also be noted that the Microsoft Teams Room devices still continue to be the only device capable of natively joining both Skype for Business and Teams meetings.

Focus here continues to be on one-click join and ease of use, rooms can be invited to the meeting or by leveraging your own identity by bringing your own device and joining via proximity.

Rooms have needed to scale, in the past this wasn’t easy to achieve, this has now changed and is a thing of the past. This is addressed via ceiling mic solutions, call out to Sennheiser’s TeamConnect Ceiling 2 and a cinematic camera solutions, the Eagle Eye Director 2 from Poly. 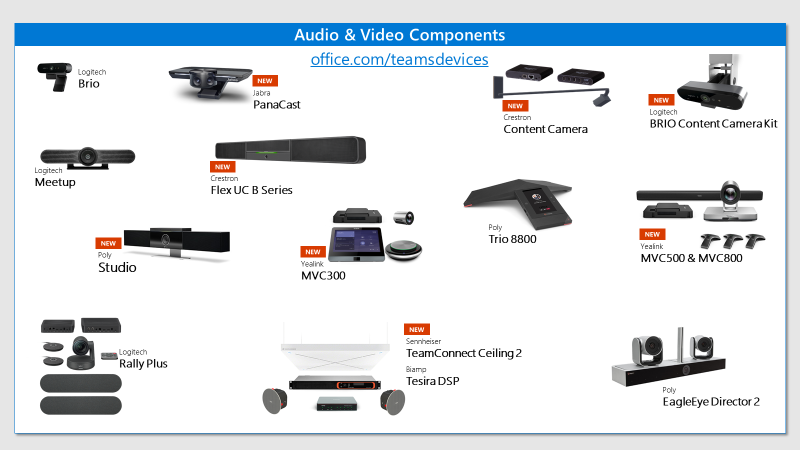 We also learn about new Microsoft Teams Room devices from Crestron, Logitech and Yealink all of which fall into the category whereby the compute is located at front of room.

We can now see a full list of features including three of which are coming soon. 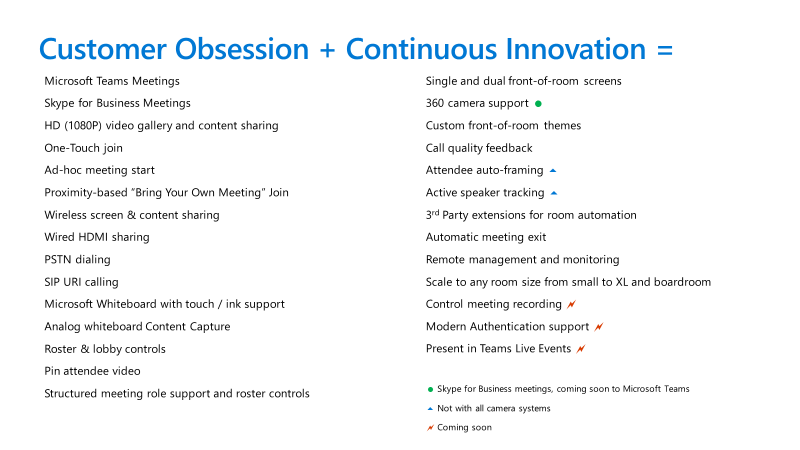 Greg gives us a look at proximity-based meeting join and intelligent (analog) whiteboard content capture, we saw this initially at Enterprise Connect earlier this year, both of which are now GA, and are killer features that make Microsoft Teams Room an extremely attractive proposition. Digital inking is also available providing a consistent whiteboarding experience across both MTR and Surface Hub.

We then see how FootLocker, a well-known sneaker store within the US, had branded both their front of room displays and controller. The latter being previously possible, then removed and due to be added back soon – it was good to see that this did not detract from the MTR UI.

Microsoft is also adding a set of control extensions for room control, in the past this user experience was controlled by the room control vendors. But often this led to a confusing and in-consistent experience not to mention some A/V chap had to perform all kinds of UI programming, it’s great to see Microsoft’s investment in this area! 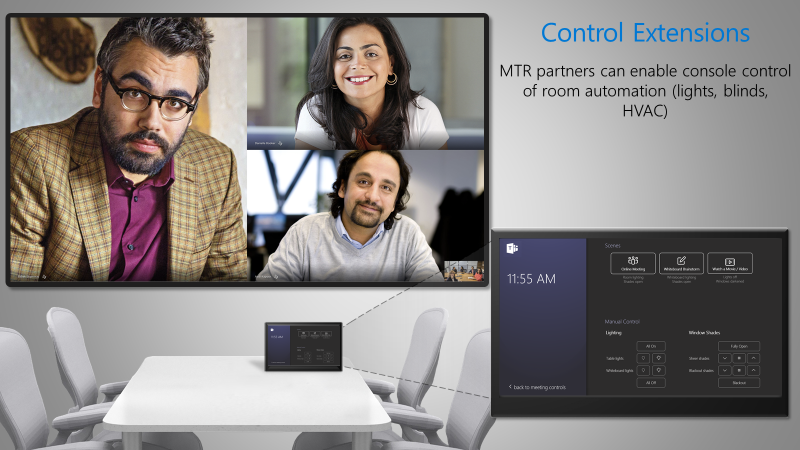 Now on to the big MTR announcements!

“Direct Guest Access for 3rd party meetings”, initially for WebEx and Zoom. This reminds me of when Apple announced support for iTunes on Windows, I recall their use of the term “Hell has frozen over”!

This WebRTC-based solution provides users with a click-to-join experience when MTR systems receive invitations for WebEx and Zoom meetings. When these meetings are invoked a Chromium application provides a native WebRTC experience for each respective UC provider. Even room controls continue to function via HID integration – this really is a tri-party partnership. We see a demo that runs flawlessly, Greg calls out that this WebEx meeting demo failed to work on the day prior, but I’m pretty sure it did work but the chap from Cisco had his audio and video turned off, woops! We expect more UC players to be added in the future.

Available beginning of 2020, web join will also be adopted on web-cable Cisco endpoints and Cisco will offer a CVI solution for older SIP and H323-based VTCs. I can’t help but feel Cisco got a better deal here, but time will tell!

Second big announcement is Microsoft Teams Room device management, this is soon to be added to the existing device management within the Teams Admin Center. This is a big deal and is long overdue, as with the Teams IP Phones Intune is leveraged and provides customers with the ability to see usage data, trigger updates and get system health data. We see an example of how you can drill down into a single system, see devices that are connected and their health, the UI is extremely clean, and I really like the use of device product pictures.

One function within the management portal which caught my eye was how certain cameras would include people counting, this is reflected within the room activity tab – very cool! 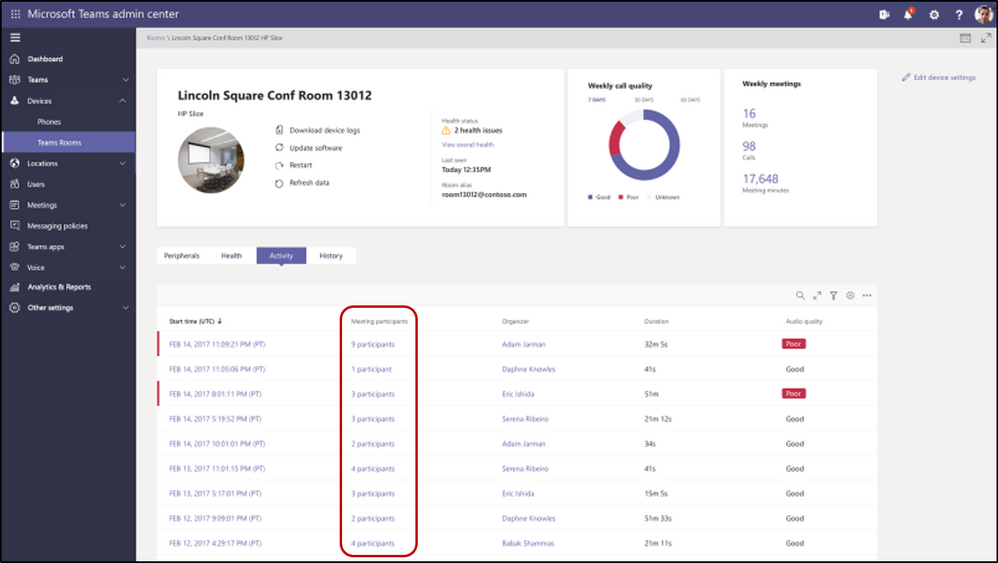 For IT departments that want to outsource this capability, Microsoft will now provide a managed version of this service, whereby customers will see an operator-only view of this console. I spent some time getting a demo of this at the Microsoft booth, it was extremely impressive and is due to cost $50 per room per month. We learn that a new role-based access control is being added that allows IT admins to delegate device-only management rights to their respective IT team.

The final announcement is an integration between MTR and Surface Hub, as mentioned previously this is a new inter-org partnership and a new feature, “Coordinated Meeting Join”, is the first fruit of this labor. This allows customers that have both MTR and Surface Hub 2S within the same room to automatically join both devices to the same meeting without any audio or video interference, so the Surface Hub can be used for what it does best, collaboration/inking and the MTR providing the audio and video experience. Proximity-based meeting join is leveraged to deliver this and even delivers in the scenario whereby a Surface Hub is wheeled into the room post meeting join – very smart!

Thanks again to the Microsoft Teams team (notably Sandhya/Greg) for letting me cover their session, it truly is awesome to see such growth within Teams devices ecosystem. To watch the session recording head over to the Ignite site here 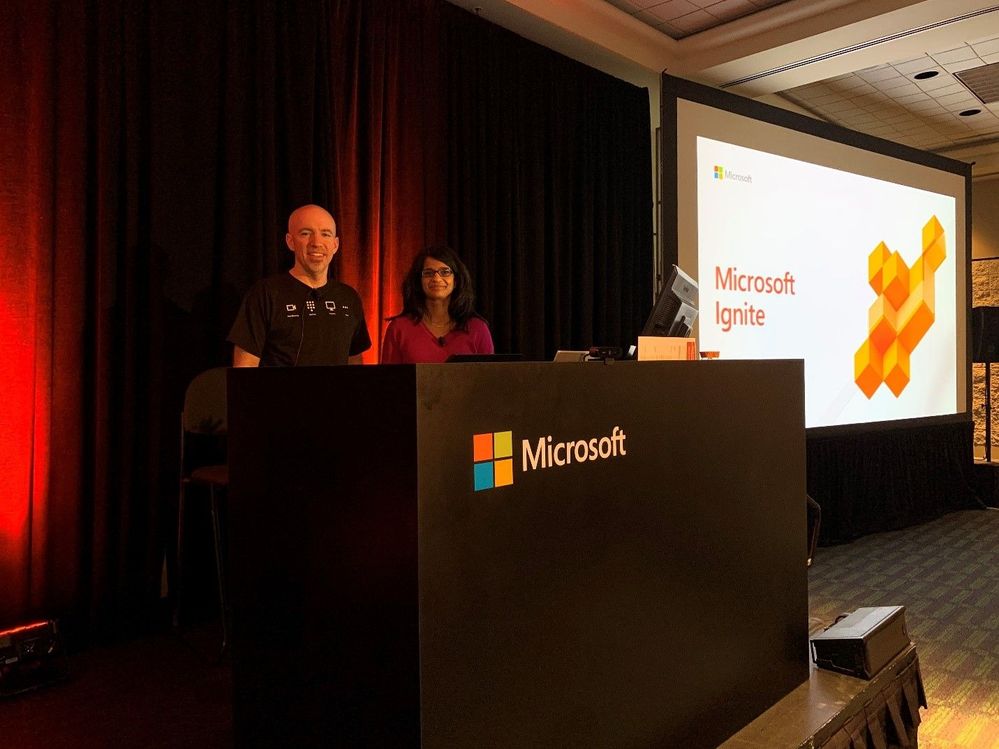