I uploaded some videos last week and this week if we open the videos in IE11 we get the following error: 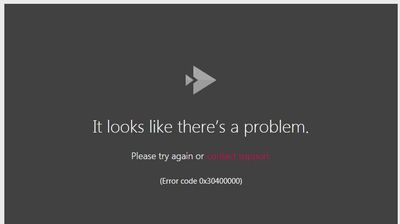 I uploaded them in IE and was able to watch them last week... Anyone else see this issue?

From the above conversations, it seems like this problem is more IE than it is the version of Windows... since IE requires Adobe Flash to play Stream videos.

My assumption would be that ANY version of Windows running IE would encounter this problem.

I would say this is more a Stream issue as it relies on old Flash technology. The thing is that MS is supplying Flash player with Windows 10, but not with Windows 7, so there is a difference. I wonder what will happen when Adobe will stop supporting Flash (eventually). Google will remove it from Chrome. MS will have to remove it also. So, Stream will cease to work completely. They need to work on HTML5 version. Yeah, it can be tough to make it work with IE. But say Youtube works without Flash in IE.

I am experiencing this issue on Windows 10 + IE11 as well. Videos embedded to our intranet from O365 appear to be in a continual buffer state and never begin playing.

Hi there, is it possible you're loading your internal site in IE10 mode rather than edge mode? That would fall back to the flash tech.

I'd also like to notify you all that Stream has been actively working on a fix for this issue. We are in the process of deploying the fix to all DCs but playback won't work until Adobe fixes a bug in their Flash plugin. We've been working with them and the current timeline for Adobe's release looks to be early August.

Adding myself to the choir of complainers. We see this issue when we embed videos from O365 Video to Yammer. Just released our latest CEO video message and comment box under the video is full of complaints of video not working. Really rewarding.. It is really hard to understand and explain that how can't Microsoft's own platform work seamlessly with their own browser.

We are sorry for the problems this has caused everyone. This is an issue where Adobe Flash made a change that broke playback in Stream and O365 Video in Windows 7 + IE 11 + Flash v30.

It took lots of investigation, prototyping, and collaboration to fix this issue. The fix ended up needing 2 parts.

The updated player #1 above has been deployed to all of Production. So if you get the latest version of Flash that is slated for 8/14, the issue in Win7+IE11 should be fixed.

We are in the process of updated to the latest version of the player (#1 above) for both embed and the portal. The rollout of this fix will take another couple of weeks. And as in above with Stream you'll need the latest patched version of Flash that is due to come out 8/14.

I can confirm that updating a workstation with Flash version 30.0.0.154 corrected this problem on a Win7 + IE 11 machine that previously was getting video playback error in Stream here in our environment so this seems like good news.
2 Likes
Reply

We apologize for the inconvenience. As Marc explained below Office video is in the process of deploying the fix which needs to be used in parallel with the updated version of Flash. The browser takes a dependency on the Adobe plugin and since there was a bug in the plugin that impacted playback we needed to work alongside them and their release cycle.

The Microsoft support article on Stream actually made it very clear for Windows 7/IE11 and Flash version, https://docs.microsoft.com/en-us/stream/portal-understanding-playback-errors. I followed the suggestion upgrading from Flash 30.0.0.134 to 30.0.0.154, most of my company user problem is resolved. This is more acceptable to our service desk than a less robust beta version.

We are still experiencing this issue with Windows 7 and IE11.  Current version of flash player is 31.0.0.135 and the plugin is enabled. When you click the video you briefly see it displayed for a second and then " The browser required Flash"error occurs.  Is there any update on this issue?

@Jerry Ober As far as we were aware this was working with the latest version of Flash. Can you work with your O365 admin to open up a support ticket and get the needed logs/traces submitted via support?

@Saili Raje FYI, in case you know of something new going on with flash on Win7/IE11.

@Marc Mroz   I opened a premium support ticket and will post the results as soon as I get them.  This is happening on all of out Windows 7 pc's not just a few. 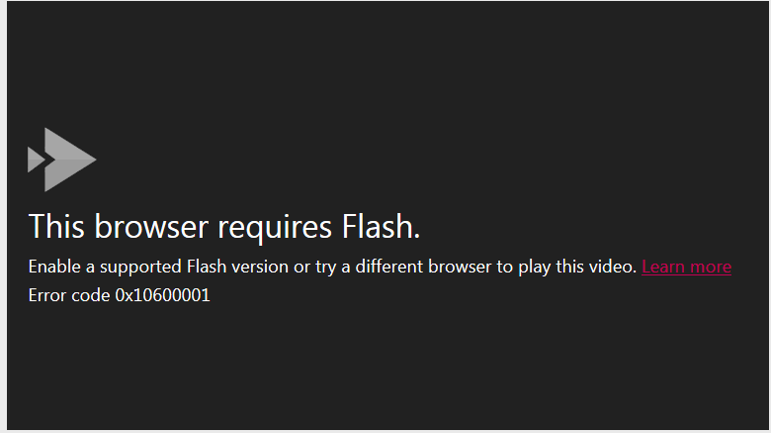 Currently have Flash 31.0.0.135 installed and the plugin enabled.

I ran into a similar issue back in May 2018 when playing Stream videos in IE 11 and documented the workaround in my blog.

Check whether disabling the ActiveX filtering would help:

Active X is already disabled.  MS is basically responding with WIn 7 is out of support in 2020.  IE is part of WIn 7.  The only issues that will be fixed in IE are security issues as IE is not a modern browser and should not be used in the modern workplace.

If you are using IE and encountering issues in Win 7, upgrade to Win 10 or use a modern browser like Chrome of Firefox.

hi there,  I wasn't able to verify this with your specific flash version as I'm already updated to 31.0.0.153 and cannot seem to repro this. Can you try updating Flash?

I have a premium support ticket open with MS and they have identified the issue.  Right now they believe it has something to do with the actual Flash version number not being recognized by the browser.  I will let you know the resolution as soon as I here back from MS.

thanks, please let me know. Also would you mind letting me know who on the support side you're working with?

thanks, please let me know. Also would you mind letting me know who on the support side you're working with?

I think I am to have a meeting with you but an working with Jeff L right now.

We are still unable to use IE11 with Win10 machines (using Flash v31).  In fact, nothing comes up, just a white space where the videos should be.