Is there a plan for having a WYSIWYG interface for closed captioning? Or is the download/upload the best to expect for now?

We are working on a transcript editor, however there are a few bugs/fixes we want to do before we open it up to everyone.

Our initial implementation will re-use the "Transcript" window on the player page and allow you to put it into edit mode to make changes to the transcript if you own the video. Due to this design decision, transcript / closed caption editing directly in Stream (to start) will only be available to users with E5/Stream P2 licenses. We likely will eventually rearrange the player page and video edit page which would allow us to move closed caption edit out of being an E5/Stream P2 only thing. However we don't have a solid plan for that now.

If you want to try out the transcript editor as it is right now in it's beta/unfinished state, you can do so with a special "hidden" query string.

As a user with E5/Stream P2 license, go to a video you own, on the player page, add the following to the end of the URL: ?TranscriptEdit=true

This is still not on for everyone and is hidden behind the query string because we still have some optimizations and fixes to do before it's ready. But you can try it out early and beta test it and give us any feedback. 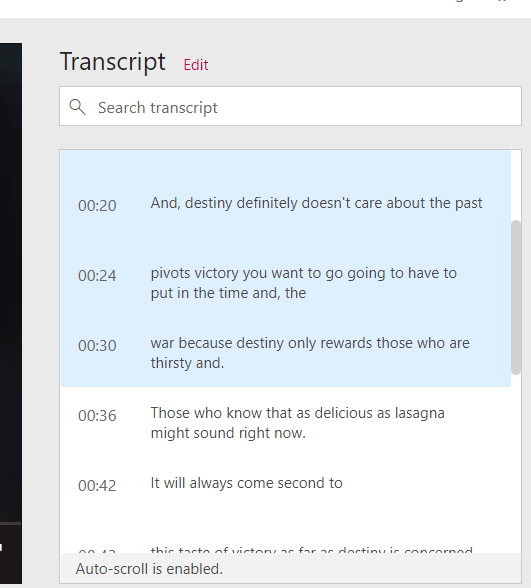 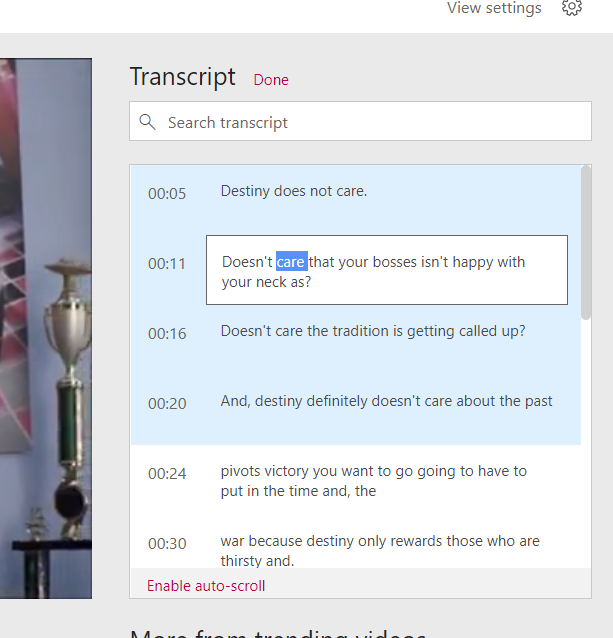 Wow, I already started playing with this, and I think this will work for us for the time being.

Adding @Adarsh Solanki to this forum thread, as he is the PM from Stream working on the transcript editor if there is any other feedback/questions.

Thanks for adding me, @Marc Mroz!

@AJ Scogz - I'm glad you find this useful!  Feel free to reach out any time if you have any suggestions/comments on this feature.

Will do, thank you!  @Adarsh Solanki

We're taking a slight reprieve from things right now but should be in touch in a few weeks if anything comes up.

I changed the VTT file for the time being, but that's all I got for now. Otherwise, I like it.

Thanks for the feedback!

Looks like it was just a thing happening one day.

I got it to work this time.