Turn on suggestions
Auto-suggest helps you quickly narrow down your search results by suggesting possible matches as you type.
Showing results for
Show  only  | Search instead for
Did you mean:
Behind the Scenes: The ML Approach for Detecting Advanced Multistage Attacks with Sentinel Fusion
By

Behind the Scenes: The ML Approach for Detecting Advanced Multistage Attacks with Sentinel Fusion

As the volume and types of security events continue to grow, so has the sophistication and velocity of the attackers. As a result, SOC analysts are overwhelmed by the high volume of alerts and incidents and are unable to effectively protect their assets.

Using graph-based ML techniques, Microsoft Sentinel Fusion combs through millions of events and identifies high fidelity advanced multistage attacks. In this blog, we'll take you behind the scenes to show you the ML approaches used in Fusion.

From Anomalous Signals to High Fidelity Incidents: How Fusion Works End to End

Anomalous signals: Fusion correlates signals from multiple clouds, on-premise, and at the Edge for your entire enterprise, including anomalies, alerts from Microsoft products, as well as alerts from scheduled analytics rules - both built-in and those created by your security analysts — helping you to automatically detect sophisticated, multistage attacks.

Graph forming: Fusion builds and continually updates a hyperconnected graph on large scale data sets, typically millions of anomalous signals in a customer workspace. In the graph, the nodes represent the entities and the activities, and the edges represent the relationships between the nodes. The activities are the alerts and anomalies from different sources. The entities can be IP addresses, accounts, Cloud resources, virtual machines, etc. 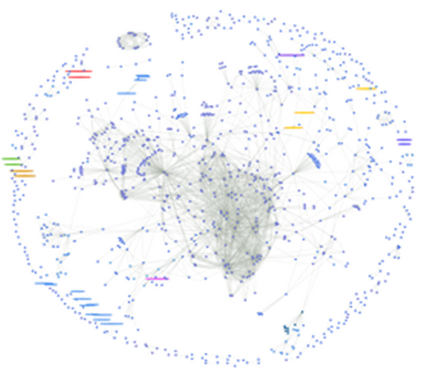 An attack pattern consists of activities (nodes), entities (nodes), and their relationships (edges). In this step, Fusion constantly takes attack patterns from the knowledge pool and identifies matches in the hyperconnected graph. Those identified matches are called subgraphs. This step reduces the millions of anomalous signals to a smaller set of subgraphs representing possible attacks. In the example below, three attack patterns are matched in the graph. There are 4 nodes and 3 edges in the top subgraph. 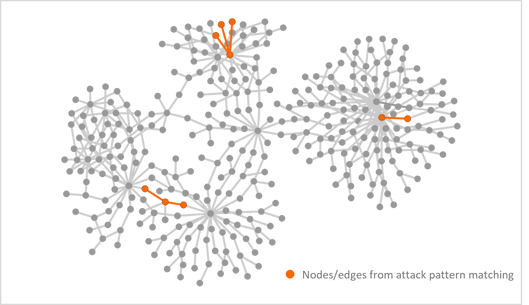 Expansion: During the expansion phase, Fusion expands the matched attack patterns to discover additional activities and entities that are relevant. 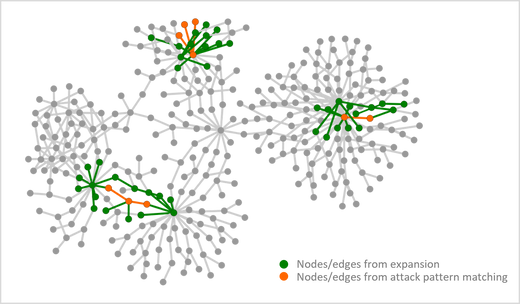 How does Fusion determine the relevance and know how far to expand? 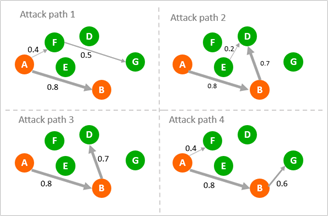 Scoring and incident creation: Once the subgraphs representing possible attacks are identified, Fusion applies a round of scoring and triggers incidents that includes the most relevant alerts, anomalies, and entities to further reduce alert volume and speedup investigation.

In this step, Fusion uses k-nearest neighbors (KNN) to calculate the killchain reachability of an attack and identify the nodes that have highest relevance in a real attack. In the example below, all the colored nodes (orange, yellow, green) are relevant to an attack. After the scoring round, Fusion only surfaces the nodes that have the highest relevance (orange and yellow colored nodes) in an incident. This way the security analysts only need to investigate a focused set of the most relevant activities and entities to quickly understand an attack. 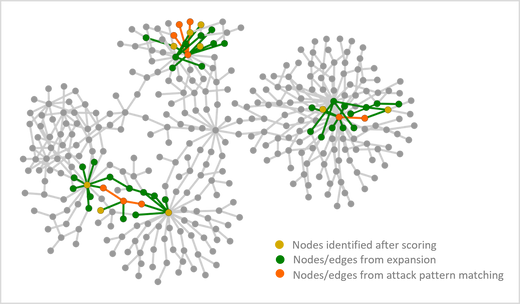 The example in Figure 7 shows a possible attack that started with initial access from the Cloud to endpoint execution, and then moved on to consistent beaconing from an internal IP address to a suspicious external IP address, and possible Command and Control in roughly 24 hours. The Fusion ML algorithms detected this attack by correlating an anomaly (Anomalous Azure AD sign-in sessions), as well as alerts from custom scheduled rules, Azure Defender, and Microsoft Defender for Endpoint. 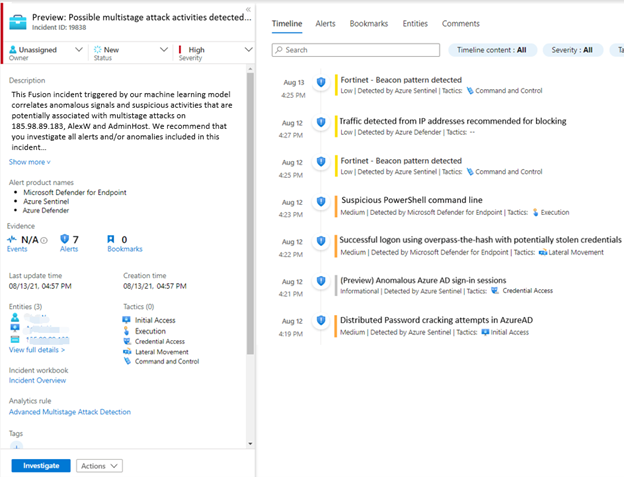 Now that you’ve seen how Fusion works end to end, we’ll expand on how Fusion discovers emerging attack patterns that contributes to the knowledge pool.

Detecting attack patterns as they evolve is a challenging task, since attackers are constantly updating their techniques and approaches. To address this, we developed Auto-Fusion algorithms that constantly learn and update our knowledge of the evolving adversary behaviors. This data driven approach allows Fusion to continually refresh its understanding of the threat landscape, adding and updating new attack patterns all the time — even while you’re sleeping!

The process is similar to how security analysts manually correlate signals together, associate them with kill chain stages, and apply their security knowledge and analysis to identify possible threats, except that Fusion runs at the cloud scale consistently, and never gets tired.

Subgraph building: In the Fusion pipeline we discussed in the first section, step one is to form a graph based on millions of anomalous signals. Auto-Fusion then builds subgraphs (also millions of them) from the full graph based on the connectivity and associations determined from their entities and kill chain information. These subgraphs represent possible chains of security events that are happening in your environment.

Surface meaningful TTP’s with attack inference: However, not all the common patterns represent meaningful TTP’s. After the first association pass, we apply counterfactual inference to identify only the subset of common patterns that are likely to be explained by intentional activities undertaken by an attacker (candidate TTP’s), and are not correlations occurring by chance. This step is important for removing noise and background effects from the common pattern pool.

These new attack patterns identified by Auto-Fusion ML algorithms, along with the known attack patterns in the knowledge pool, are used in Fusion for detecting advanced attacks in your environments.

The Auto-Fusion ML algorithms also constantly learn from existing attacks and apply analysis based on how security analysts think to help you keep up with threats that are on the horizon and stay one step ahead of attackers.

To learn more about the latest Fusion feature releases, check out Microsoft Sentinel Fusion. If you have additional feedback for your product experience, share your insights through “Guides & Feedback” in Sentinel, our team would love to hear from you!