First published on CloudBlogs on Dec 16, 2015
The article below is written by a recent intern with Microsoft Intune. Hello! My name is Jessica, and I was recently an intern with the Microsoft Intune team. I’m originally from the sunny island of Singapore, but I’m pursuing my undergraduate degree in computer science here in the US. When I’m not thinking about technology or user experience, I’m an illustrator, language enthusiast and singer in a classical chorus. This past summer, I worked on designing several new features for mobile application management (MAM) on iOS and Android devices. Today, I’m excited to dive into one of these projects, and to talk a bit about my overall experience interning at Microsoft. Using Apple Touch ID in MAM-enabled apps Microsoft Intune’s MAM capabilities provide many ways to protect corporate data in mobile apps. For example, you can enable a setting within a MAM policy that requires your users to enter a 4-digit PIN before being allowed to access the app. Many of you have asked if we could bring the convenience and simplicity of fingerprint authentication to this workflow, especially on the iOS platform. As announced earlier, users on supported devices running iOS 8 and later can use a Touch ID-enrolled fingerprint as a substitute for the PIN in the latest versions of certain MAM-enabled apps. OneDrive is the first app to get this feature, with support for Word, Excel and PowerPoint coming later this year, and more apps such as Outlook on the way. The first time one of these apps is run, the user is prompted to set and confirm a PIN. After that, if the system supports it, the user can enable Touch ID for the app or turn it on later from the PIN entry screen. The next time the app is launched, the user can simply scan their fingerprint and access the app right away. Now your users can get to their managed apps more quickly and conveniently, while you can continue to prevent unauthorized access to the apps – in fact, Apple claims that the chances of breaking Touch ID are 1 in 50,000 for one enrolled finger vs. 1 in 10,000 odds for guessing a typical 4-digit PIN. 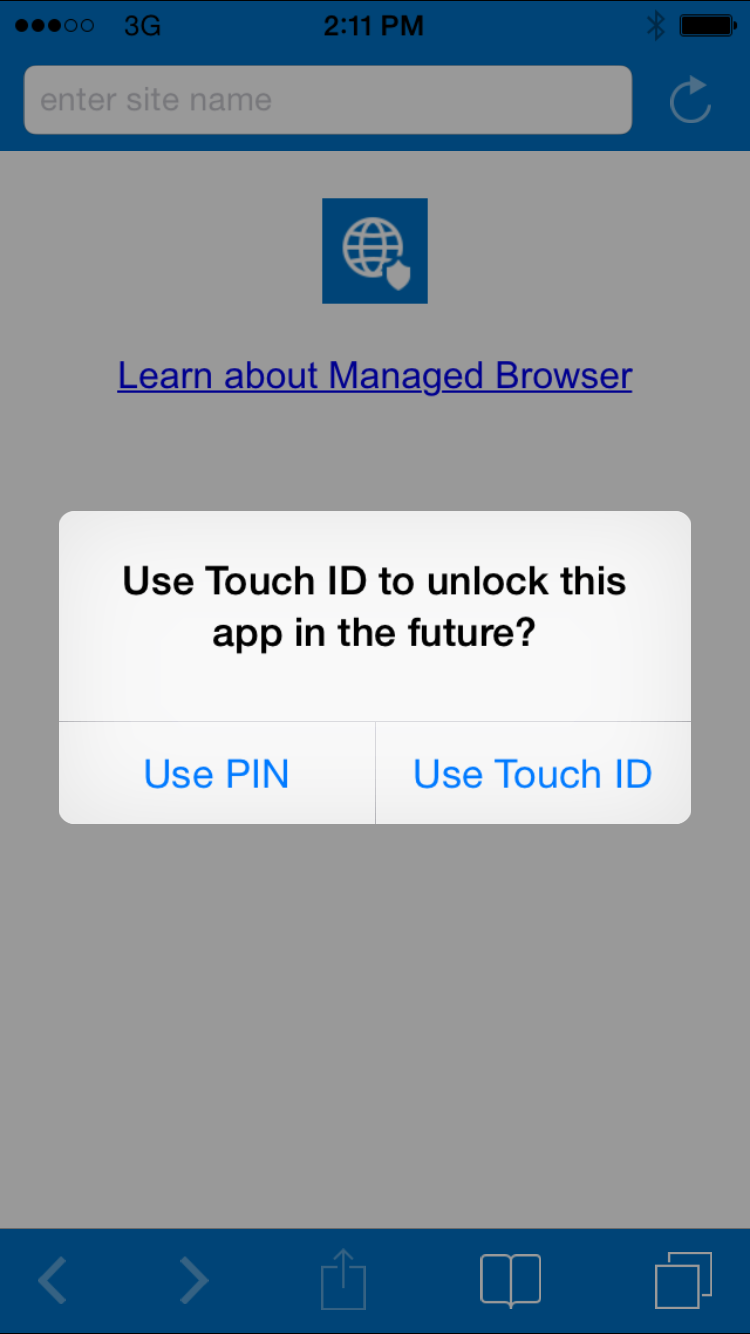 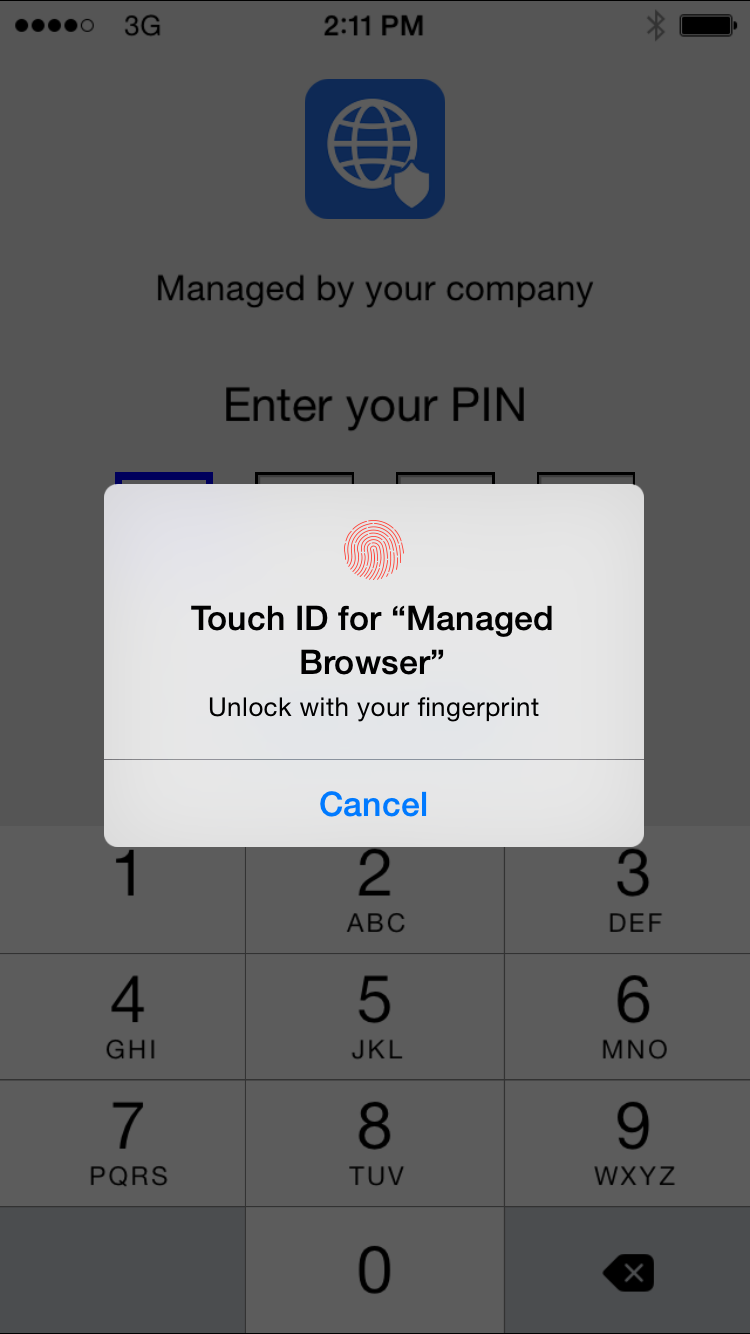 The process of building this feature Something that surprised me when I started with the Intune team was their openness to customer feedback and concern for the end user experience. As a college student who really only interacts with consumer products, I had believed that enterprise software was necessarily archaic and unresponsive to user needs, and it was really nice to see that wasn’t the case here. We really do love hearing from our customers and users, and you can always use our new UserVoice site to post suggestions or issues. This particular request for Touch ID support was first brought up by one of our customers in early May. We started the engineering work in mid-June when my fellow intern and iOS developer Chris Lim came on board. Our code was complete by the end of June, but as we found out, making additions to a big product, especially one with as many moving parts as Intune, isn’t as straightforward as adding a few lines of code to a student project. We have to make sure that new features don’t affect stability and existing functionality, get them translated for non-English versions, add behind-the-scenes components to the Intune service, and so on. Even after all the other work is done, just releasing the feature is complicated, as we have to coordinate schedules with many other partners both inside and outside Microsoft. The intern experience I’m very excited to finally see this feature make it to users. When I joined as an intern, I was expecting to have a small side project that would be lucky to make it past the summer. Instead, I got to take on the responsibility of designing real features that will be seen by thousands of Intune customers and end-users. When new issues or ideas came up in the course of my research, I had the freedom to spin off new projects to help to make Intune a better product overall. I’m also very happy that I got to work on user interface-related features that allowed me to capitalize on my strong interest in design. The culture here is also great. Everyone is very friendly and laid back yet committed to their work. My manager, mentor, and co-workers – even those from different teams or different countries – have all been incredibly patient, helpful and supportive. I was also pleasantly surprised by how there are relatively many other female engineers here, which (sadly) isn’t something you see very often at tech companies yet. Finally, beyond work, Microsoft lets us interns have fun: for this year’s big intern event, I got to visit the US West Coast for the first time, and saw one of my favorite bands perform live up close. Working with the Intune team has been fantastic, and I hope this post offered an interesting look into intern life and the type of work we do. As always, we are happy to hear your feedback about Intune in the comments and on our UserVoice site . Additional resources Learn more about configuring data loss prevention app policies with Microsoft Intune . And learn more about protecting data using mobile application management policies with Microsoft Intune .
0 Likes
Like
Share