First published on CloudBlogs on Apr 05, 2016
This week will mark four months since the latest release of ConfigMgr – one of the fastest adopted deployments of ConfigMgr EVER. As a quick refresher, with ConfigMgr Current Branch we did not give it a traditional version number but instead, when we released this new version on December 8, 2015, we released ConfigMgr 1511 – drawing the name from its release during the 11th month of 2015.  Two weeks ago we also released ConfigMgr 1602 (2nd month of 2016).   This frequency is possible because we’ve turned ConfigMgr into a service . Moving to delivering ConfigMgr as-a-service represents a huge change in how we engineer it, and it has enabled us to get new value out to you fast and often.  I've worked on ConfigMgr for 13 years, and I have never been more proud of what this team has accomplished. This massive overhaul came at a time when we recognized a pressing need to change how we thought about engineering ConfigMgr to align with Windows 10.  Windows is now a service (WaaS), and, in order to keep up with the continual release of new capabilities in Windows, we needed to turn ConfigMgr into a service, too.  It was an exceptional engineering challenge!

When we began planning for this move, we had to take into account the fact that the ConfigMgr customer base is unbelievably massive:  ConfigMgr currently manages more than 2 of out every 3 PC’s in the Enterprise, as well as millions of mobile devices (Windows, iOS, and Android).  It has been remarkable to watch how quickly these users have been moving to the service-based 1511 and 1602. For reference, included below is a chart that shows the number of devices that have been brought up for management each week since its release on December 8th.  Since that time, there has been an average of ~ 1M devices per week upgraded for management via ConfigMgr 1511.  Since releasing 1602 two weeks ago, we’ve already seen more than 38% of organizations using 1511 upgrade to 1602.  You can see we were working with customers who were deploying 1602 as early as February 8, 2016 – thank you TAP customers for working for closely with us! 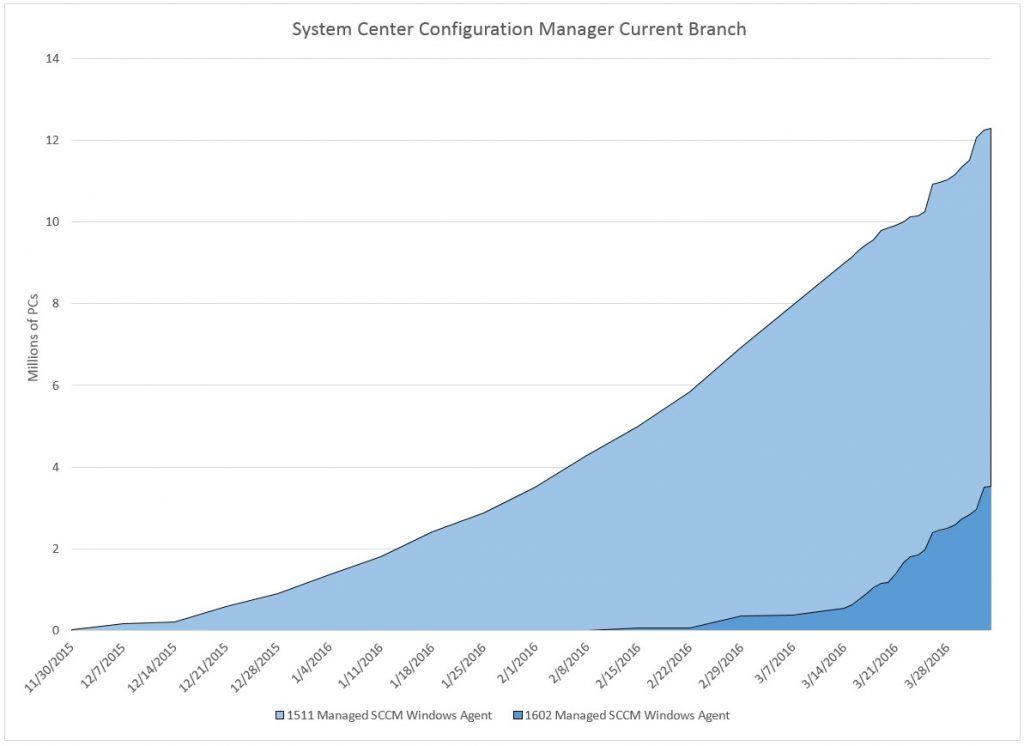 Over the weekend, Brian Mason (a ConfigMgr MVP) upgraded the ConfigMgr infrastructure he oversees of 383,000 devices to 1602.

Brian works for a massive financial organization that is spread all over the world – an industry that simply cannot tolerate downtime.  Looking at this as an engineer, seeing such a massive number of devices moving to 1511/1602 in a short period of time, is pretty amazing.  And even though these 12.5 million devices only represent about 10% of the ConfigMgr customer base – what’s really clear is that 1511/1602 are ready for everyone.

A New Surge in Demand

In the 13 years I have been working on ConfigMgr, I have never seen this much interest in ConfigMgr . The number of inquiries coming into Microsoft around the globe on ConfigMgr and the ConfigMgr-Intune continuum is almost too much for us to service .  Why?  The reason is pretty straightforward:  There is a historic level of interest in the combination of Windows 10 with the integrated solution of ConfigMgr, EMS and Office 365.  This combination offers security, productivity, and an iconic work environment across all devices. Building on something as ubiquitous as ConfigMgr just makes sense:


There has been an unprecedented cross-company effort to ensure that ConfigMgr is the very best tool to upgrade to and manage Windows 10 .  Remember that the Microsoft Deployment Toolkit is built from the ConfigMgr Deployment Task Sequencer.


I was in the San Francisco area last week meeting with customers (1:1 meetings, 5-6 each day), and all but one customer I met with was using ConfigMgr. Nearly all were moving to, or already using Office365, and almost all were in the process of (or already using) Intune to manage and secure the content in their Office mobile apps.  This is the combination that most customers will use over the next decade – Office 365 + ConfigMgr + the Enterprise Mobility Suite .  We have carefully engineered these to be used together.  For example, there are unique data loss prevention capabilities when using Office 365 and EMS together that you do not have in any another EMM solution.  There are also unique identity protection capabilities that come with this combination, e.g. helping you identify user accounts that have been compromised and are being using to attack you or steal information. This is why there is so much interest – this is the killer solution for you for to use for the next decade to “ empower your users to be productive on the devices and apps they love, while keeping the company secure.” That’s our vision statement for Enterprise Mobility, and we’re making sure it happens.