Devs Speak: How Crises Can Bring Out The Best In Us

Devs Speak: How Crises Can Bring Out The Best In Us

With the global pandemic putting our world and lives in a tailspin, it is perhaps hard to believe that only one year has passed since our communities faced back-to-back crises.

In March last year, MVPs Steve Knutson and Hamish Watson were at the MVP Summit when news broke of a mass shooting in Christchurch, New Zealand, which claimed the life of their dear friend and former MVP Atta Elayyan.

Then, the very next month in Sri Lanka, Shameera Prajapriya was in the middle of organising the Global Azure Bootcamp in Colombo before a series of bombs ripped through the capital city on Easter Sunday.

The dual tragedies hit our MVP communities in distinct ways and, at the same time, prompted action in the face of overwhelming situations to lift up those worst affected.

This is what the inaugural Devs Speak virtual series sought to highlight in May when the event, itself held during the coronavirus crisis, brought together developers and tech enthusiasts from APAC to discuss how they manage pandemics and improve support systems during trying times. Steve, Hamish, and Shameera shared their unique experiences in a panel entitled “Providing emotional support during a Crisis – Managing sensitivities and meet-ups during crisis period”. 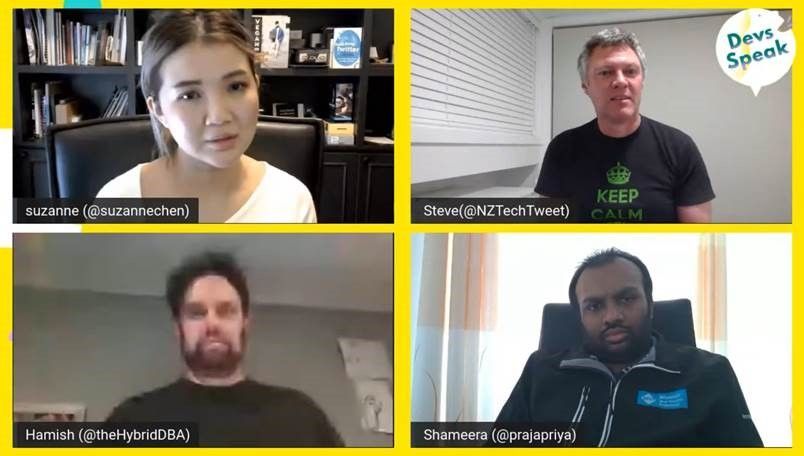 In response to the mosque attack in Christchurch, Steve and Hamish said they felt compelled to use their IT skills in order to help the Canterbury Muslim Community Trust (CMCT) manage the resulting influx of online interest and donated goods. Thus, New Zealand and Australian volunteers gathered for a weekend community hackathon shortly following the attack to develop systems which could improve the trust’s customer relationship management capabilities, social media and website, and general IT systems.

Co-organizer Steve said the event empowered those with tech skills to best put them to use in a time of great community distress. “The big take away for me was a comment from one of the participants. They said they felt helpless and wanted to contribute in some way, and the hackathon provided a way to contribute using the skills we have,” he said.

“Crises are horrible to go through, but you can turn a positive out of that negative,” Hamish said.

This idea is certainly evident in the experience of Shameera, whose event was originally planned to take place only six days after the Colombo attack. Undeterred, Shameera and his co-organizers worked with the national government and event partners to reschedule the event for June.

“After going through many barriers, we were able to host the Global Azure Bootcamp Colombo event as another successful event in Sri Lanka with more than 300 participants, three different technology tracks, one keynote session, and 21 other sessions,” he said.

The event success was evident in the feedback of attendees, Shameera said, with one young woman later writing online that the conference was a chance to once more share “contact with strangers and contribute to reunite this country.” 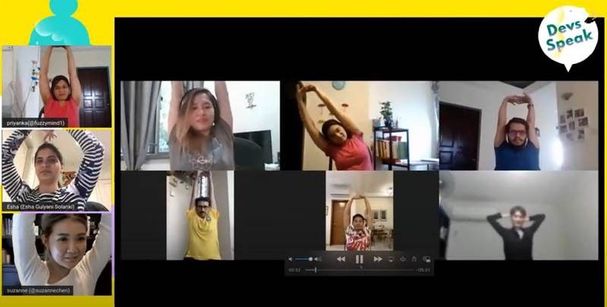 A stretch session led by Women Who Code and Azure Community Singapore during Devs Speak.

Fellow event speaker Ben Ishayama-Levy, who is helping Japan to build their Covid-19 Radar App with Microsoft, said it was heartwarming to see so many in the APAC tech community working to solve problems one line of code at a time. “As tech speakers, this is our role to share what we are passionate about, raise awareness on issues that unequivocally matters, and highlight we all can make a difference using each unique skillset. All we have to do is jump in,” Ben said.

Devs Speak is a product of turning a negative into a positive with the event following the earlier cancellation of Microsoft Ignite the Tour Singapore. As a result, the local MVP Program and Cloud advocacy team explored running a series of virtual events to support the tech community in the region.

Devs Speak, which organizers hope to be held quarterly, marks the first of its kind bringing together MVPs, Microsoft Student Partners/Learn Ambassadors, and broader developer communities in the region.