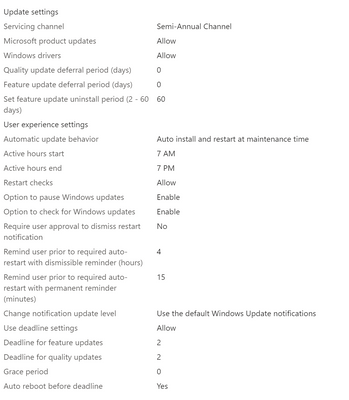 I set up an update ring with the following settings (see above). Almost all the machines says "succeeded" and "up to date" but are still on 1909? I have the Feature Update tool (Preview) set at 20H2 but all of the laptops are showing like this OR not scanned, which the not scanned I imagine is people being on vacation atm.

If I hit the machine with a usoclient.exe startinteractivescan with our remote access tool they kick off updates and then move up to 20H2 after the user reboots, at least from what I can tell. To me it looks like these machines aren't doing jack. They are all AAD devices, no GPO involved. Clearly they move up if I kick off the usoclient.exe startinteractivescan but Intune isn't doing anything.

Do you have telemetry turned on with a minimum setting of basic? Also, how did you assign both the update policy and feature update policy? Microsoft recommends to assign the polices to device groups when using both.

"While update rings can deploy to both device and user groups, consider using only device groups when you also use feature updates."
0 Likes
Reply

HI, just to rule some things out. What happens when you try to test out the new feature update deployment and assign/test it out on a test device which has the problem? 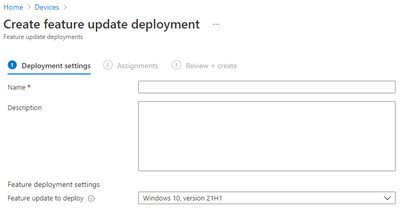 And just like wjpvandenheuvel said, you will need to turn on telemetry and make sure the Microsoft assistant service is running

So I got Telementry turned on, but I have spot checked some machines and that service isn't running. Which I don't get because 90% of the machines are AAD and do not receive any sort of GPO that would turn that off.
0 Likes
Reply

HI is the service disabled or set to manually?
0 Likes
Reply