We are testing Android Enterprise COSU enrolment with Intune for a Multi-Mode kiosk device. Everything works fine! (auto-enrolment with dynamic Device groups).

Thanks for the reply.

We are in a similar position. We are using Android Enterprise with the Play-store apps and web shortcuts.

All you get is the "Back" button. I logged a support case with Microsoft and they said this is "by design". You would need to log a request on the Intune user voice.

Thanks Tom , appreciate the information sharing. I opened a ticket and they are currently investigating. We will see.

Did you have any progress with this?
0 Likes
Reply

You can configure the Managed Home Screen from the Intune console.

Add a new policy, Use the Configuration Designer of JSON scripting and  you will see all the available options as shown in the attachment.

After saving the policy. Assign it to the same dynamic group that the devices are added to automatically when you first created the Kiosk Enrolment Profile.

Use this same method for all your apps. Not all apps will offer the same level of control/configuration; but many do. Chrome is a good example. Locking down options is very easy using the Configuration Designer. You can then export the JSON script.

Yes , you can now control some settings for the managed home screen from within Intune.

Hi , good question. Never really thought about this. We have the same behaviour. I will check and see if there is a solution for this.

Thanks much. Jfyi I am testing this with fully managed

We are having the exact same issue with Lenovo devices... 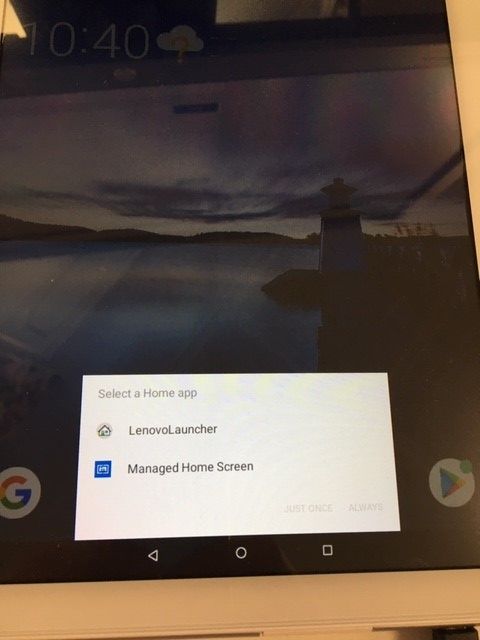 With our older Android devices upgrading to Android 9.0 and new devices being delivered with the same. i have noticed that the power button no longer offers Power Off/on and Restart options.
I cannot tell if it is just the notification pop-up that is blocked or the functionality is blocked at source.

The only way, so far, to power off or restart the device; is to exit Kiosk Mode first. Has anyone found a way around this; preferably from the Intune console.

From the GLOBAL_ACTIONS feature: "Enable the global actions dialog during LockTask mode. This is the dialog that shows up when the user long-presses the power button, for example. Note that the user may not be able to power off the device if this flag is not set.

This flag is enabled by default until setLockTaskFeatures(android.content.ComponentName, int) is called for the first time."

That definitely looks like the issue. I pointed that out to MS but the call is now nearly 4 weeks old. They have updated the Managed Home Screen app, but it is still has a non-configured

LOCK_TASK_FEATURE_GLOBAL_ACTIONS. If they actually set that in the app to true, I think the power button UI should be able to appear on top of the Managed Home Screen.
Thansk for the pointers SnarkShark.

Had another update from MS, they seem to have got a step closer to resolving this, Google have a big part to play in this too.

I received an update from MS informing that the issue has now been resolved!
So, I restarted one of my devices and after the first reboot, the Power UI did appear..ONCE. And never again thereafter! I have replied back saying that it does not work.

On a slightly related issue.

Quick question, although this may just affect Kiosk devices.
One of my Samsung J6's has just done a fairly lengthy system update.
This has changed the Home Screen appearance, as far as adding shortcut icons to the bottom of the screen!

I am about to rebuild it as a Fully Managed device to see if the same issuette appears there too.

Both devices are on Android 9.0, built by KME method, System apps disabled.

I have rebuilt the same updated device as a Fully-Managed device and the 3 standard/default icons, Phone - Contacts - Messaging appear.

So, it appears this is only affecting Kiosk devices. The icons are not active, apart from the Settings and Apps icon.

@Peter Wuytack Did you ever figure out how to get the top status bar (clock, battery, etc) to show when a LOB app was launched?

If someone have the solution to see the battery level when using a managed google play web link, I take.

We have the demand from users.

I try Standalone instead of full screen but it doesn't work. Same with Minimal UI.