I have created a new Poll inside MS Forms, as follow:-

but the issue i am facing is that when the user provides his/her response >> they will get this message:- 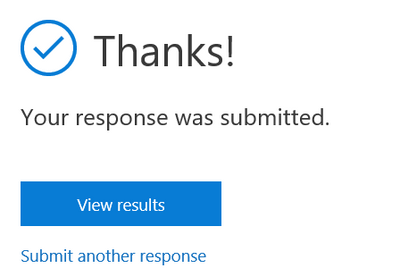 but clicking on "View Results" button will show them their last response and not the overall responses from all users. so is there a way to force this, to show the overall results for a Poll after the user submit his/her response?

Second question, can we have an option (similar to Yammer Polls) to edit the response after submitting it>> so if the user already submit a response >> to be able to edit it >> instead of having to resubmit the response again. As in this case will have duplicate responses from the same user incase the user re-submit his/her responses more than one time?

Re: How i can show the overall results for a Poll after the user submit his/her response

I would also like to see a public polling feature that shows results to users after submitting their response. Potentially something like this:

Re: How i can show the overall results for a Poll after the user submit his/her response

I have the same issue with missing "overall results" after user submits a response. Has a solution been found for this – or is it conceivable that Microsoft is developing such a feature for a future upgrade?
0 Likes
Reply

Microsoft Forms: How to show overall Poll result right after submitting a response?