Turn on suggestions
Auto-suggest helps you quickly narrow down your search results by suggesting possible matches as you type.
Showing results for
Show  only  | Search instead for
Did you mean:
Microsoft Authenticator for Windows Phone is Generally Available!
By

First published on CloudBlogs on Nov, 14 2016
Howdy folks, Back in July we blogged about our plan to combine the two different authenticator apps from Microsoft into one new app, Microsoft Authenticator. Since then, we've released the iOS and Android versions of the application and updated them both quite a few times. Today I'm happy to let you know that late last week, we released the Windows phone version! 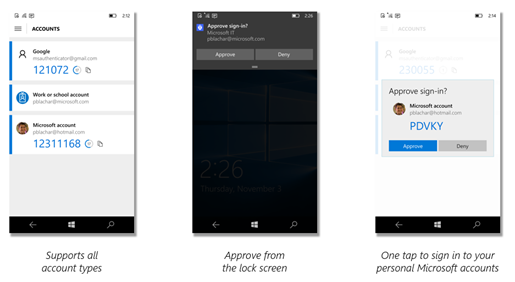 Getting here has taken a bit longer than we had hoped (due to some pretty challenging bugs) but we're excited to finally bring our industry-leading two-step verification experiences to Windows Phone (Note: you need to be running the Windows 10 Anniversary update). Just like Android and iOS, the new app provides push notification approvals for both our Azure AD and Microsoft consumer accounts. For anyone currently using the app, this new version will arrive as an update. All of your accounts will seamlessly move over to the new app. Besides the complete redesign, there are quite a few changes under the hood as well, including tons of performance, reliability, and accessibility features. One change to note involves moving to Window's' latest notification service. This might prevent you from receiving the first few approval requests from outside the app. It's only temporary, and the requests can still be easily found by opening the app. Hope you enjoy the latest app, and I look forward to hearing what you think! Best regards, Alex Simons (Twitter: @Alex_A_Simons ) Director of Program Management Microsoft Identity Division
0 Likes
Like