I am currently working on a report of users around cloud application usage. If I look at the overview of Apps in Cloud Discovery it will list the Application and an amount of users. However if I drill down into users the number reported in the overview is not the same as what is exported. Example Facebook users may show to have 200 users in the reporting period, but when you click on the 200 users it then lists only 180. I have seen it the other way too where the application has reported as 4 users but when I view the users it lists 5. Can anyone tell me why these numbers are inconsistent?

In this example it lists 3 users but when you select the users it lists 4 users. 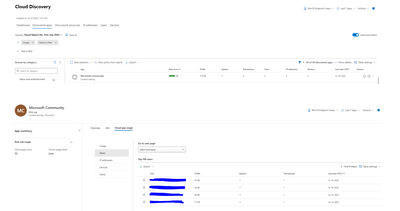 Maybe because you are limiting to last 7 days in the view? It seems that the view here is limited to last 30 days, but the export tool gives you the option to export all users.