Macro command "AppleScriptTask" causes grey/green box to appear and it goes on getting darker as AppleScriptTask keeps on executing in PowerPoint. This is very prominent in MAC Mojave and High Sierra. It doesn’t even go away until all instances of PowerPoint are closed. I am using PowerPoint version 16.23

Following image shows the box that appears on desktop on running AppleScriptTask and this does not happen instantly. It comes after 3-4 AppleScriptTask calls have been issued. Gradually it goes on getting darker. I have come across few posts where users faced the same issue in excel versions but when they had updated to latest excel versions of MAC( ver 15. something) , this issue got resolved.

Is there anything that can be done to resolve it ? 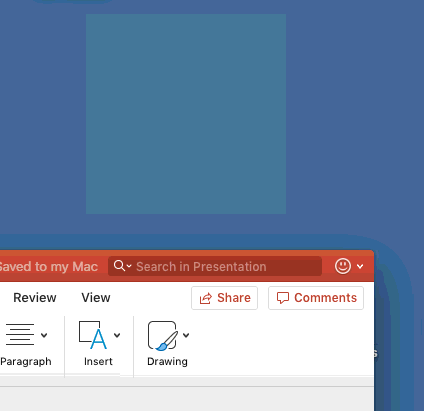 I want to use slicer in PowerPoint any body help me how i can use it ?
0 Likes
Reply