Turn on suggestions
Auto-suggest helps you quickly narrow down your search results by suggesting possible matches as you type.
Showing results for
Show  only  | Search instead for
Did you mean:
Visio 2010: Better with Windows 7
By

Windows 7 is here, and it makes it easier to find and work with your favorite applications. This post details the work we did in Visio 2010 to take advantage of new Windows 7 features, to make working with Visio documents even easier.

Multiple Documents in Visio 2010 and the new Windows 7 Taskbar

The new Windows 7 taskbar presents a unified interface for launching and switching between applications and documents within them. With Windows 7 and Visio 2010, it is now easier to work with multiple Visio documents at the same time.

We received lots of feedback on the Technical Preview asking for the ability to preview open Visio documents as multiple taskbar items. We listened, and now in the Visio 2010 Beta you can see previews of each Visio document directly from the taskbar, similar to Word and PowerPoint:

By clicking on a thumbnail, you can switch directly to a specific Visio document. If you hover over a thumbnail, Windows shows you a full-size preview of what that window looks like, through a feature called Aero Peek. With Visio 2010 and Windows 7, working with multiple documents at the same time is simple.

For more on the Windows 7 task bar, see this blog post on the Engineering Windows 7 Blog.

Another common request we receive is to enable Visio documents to be edited on separate monitors, similar to Word and PowerPoint. While Visio still displays multiple documents in the same application window, there is a workaround to enable dual display support: launch two instances of Visio.

You can do this in Windows 7 by launching Visio, and then right clicking the Visio icon and clicking on the “Microsoft Visio 2010” item. This will launch a second instance of Visio. 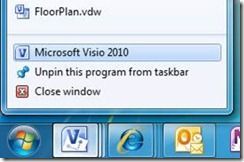 Now that you have two instances running, move one instance of Visio to your second monitor. You can then open two separate files in two separate windows. Even though you’re running two instances of Visio, they are both represented by the same icon in the Windows 7 taskbar, so it’s easy to switch between documents.

If you have a touch-enabled device, Windows 7 allows you to interact with your PC with your fingers. This feature, called Windows Touch, brings a set of gestures to the operating system that can be used in the OS and several applications.

The above scenarios work directly on the drawing surface, and in full screen mode! Check out the video below to see multi touch in action!  (Note: there is no audio). 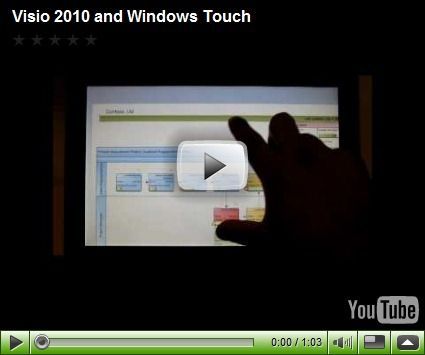 As seen in the video, we have also integrated the same touch support in the Visio Viewer and in Outlook 2010 preview mode. If you receive a Visio diagram as an attachment, you can use these touch gestures to navigate the diagram directly in Outlook 2010. Click here for more information about Windows Touch

As usual, feel free to drop us a comment on the blog or use the Send a Smile feature in the Visio 2010 Beta to let us know what you think.