I'm putting together some IT Pro training on Office 365 ProPlus and I'd like to cover (briefly) the network impact of the initial deployment and the regular updates.

I know the updates will vary in size depending on the contents of that particular update package (fixes & features).

I'm demonstrating using the Office Deployment Tool so those updates are pulled from an on-prem source machine randomly by the clients.

I've found some 2013 information from a Garage video (https://blogs.technet.microsoft.com/office_resource_kit/2013/03/05/the-new-office-garage-series-who-...) particularly:

"But how much network bandwidth does an Office 365 ProPlus install consume?

Well, if you download the Click-to-Run package for 32-bit en-us build 15.0.4454.1511, it’s 994 MB total. The MSI package for Office Professional Plus 2013 is 710 MB. The problem is we aren’t comparing apples to apples here. You see the Click-to-Run package is actually a “Mondo” Office build containing Visio and Project binaries. If you install Office 365 ProPlus (without Visio and Project) over a network connection, you will consume around the same 700 MB as the MSI package because you are not installing Project and Visio. So it consumes about the same amount of bandwidth as the Office Professional Plus 2013 MSI package.

Jeremy: The secondary question we tend to get after the install is, “how big are updates then?” That, as with the MSI, depends on the number of things we update in a given period of time. I’ve downloaded and extracted all of the Office 2013 32-bit updates to date (minus Visio, Project and SharePoint Designer) and there have been around 397 MB of MSP files since 15.0.4420.1017 was signed off on October 10, 2012 to now March 6, 2013. If you upgrade a Click-to-Run package of that 4420.1017 vintage to a current build – say 15.0.4454.1511 – you’ll see a little less in terms of the packet traffic going over the network. This is because the MSP files may overwrite some of the binaries they’ve updated over time.

Yoni: The main takeaway here is that the network bandwidth consumption of an initial Click-to-Run  install is about the same as a network install of the traditional MSI package. Roughly the same goes for your updates. And if you are totally network-constrained – like 56k dial up modem slow, you can install Click-to-Run from USB or DVD media just like the MSI.

Jeremy: One other cool benefit of Click-to-Run is the ease, size and time of the initial installation. With an MSI, you would install 4420.1017 and you would probably have the 397 MB of MSP files in the “updates” folder of the install source. That would make for about a 10 minute install of the core 4420.1017 build, then the 30 updates delivered since release to manufacturing would install for the next 10 minutes or so. The total package size in that case is about 1.1 GB and would grow month over month. With Click-to-Run each build is cumulative and contains all the updated binaries to date, so the overall package size doesn’t really change. Regardless of where you are in the release lifecycle of Office, your install times will consistently be about 2 minutes to launch applications and around 4-5 minutes to be fully-cached under normal circumstances."

Does anyone have any advice or updated information on the source file and update file sizes or general network impact?

Hi Sonia, have you checked out the Preferred Practices guide for Office 365 ProPlus deployment?  I don't know if it will answer your questions exactly but it does have some relevant sections.  Here from the  Planning - Locally Managed section (there is a corresponding Enterprise Managed section as well), there is some network info:

This might be of some interest as well - Deploying and updating Microsoft Office 365 ProPlus. Being able to manage Office 365 ProPlus updates natively in Configuration Manager is a great feature for larger deployments.

lol well that would have been the perfect place to start, seeing as I have already downloaded it and look at other sections.

Thanks for pointing me in the right direction - that's perfect.

It does highlight a disconnect in discoverability though. My default research mode is to web search for things, so the detail in this document won't show up in an internet search.

I'll clear some deadlines and add this to my list of things to blog about. If we can raise the online visibility of the detailed information that's in this guide, it will help. Searching for the network impact of Office 365 ProPlus didn't lead me to this resource.

Glad I could help, this page also might be of some interest - Overview of the update process for Office 365 ProPlus. Specifically: 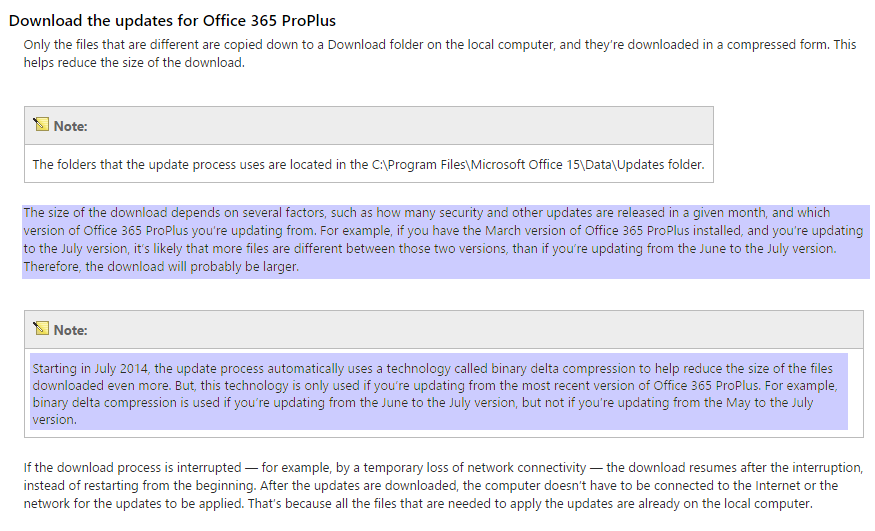 Remote working for IT Pros