Blockchain has captured the attention of businesses and investors lately, but besides the buzzword, what is blockchain, exactly?

Which is used to create a:

You’ve likely heard of blockchain as the technology that powers Bitcoin. You also might know that it is a decentralized exchange system with no bank or government monitoring. At the heart of the Bitcoin payment system lies a digital ledger that describes a chain of transactions for every bitcoin exchanged in the system. Every time a peer-to-peer transaction occurs with bitcoins involved, these transactions are added to a transaction block. This block contains information that identifies where the sender of bitcoins got their bitcoins from, and the various hands that exchanged it. This chain of transactions is the blockchain.

The potential impact of blockchain is significant across all sectors and industries, from banking to government, to healthcare, and beyond. As a decentralized digital ledger, blockchain:

According to market analysts and leading consulting firms, the top five industries that blockchain will likely disrupt by 2020 are financial services, government, real estate, supply chain management, and media distribution.

Microsoft has also shared an insight of industries of their customers on Azure that are experimenting with blockchain. These include financial services institutions, insurance companies, travel and transportation, retail, power and utilities, and others. Source: Accelerating the adoption of enterprise blockchain. 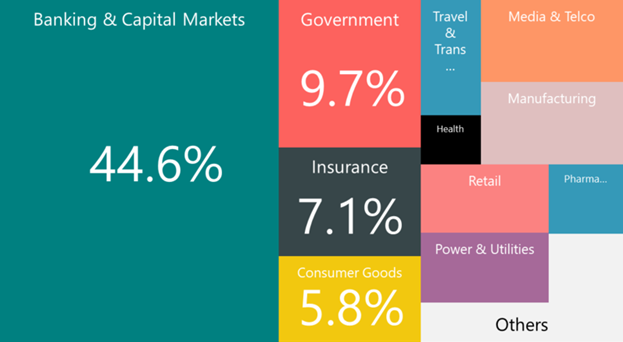 With blockchain, we can imagine a world in which contracts are embedded in digital code and stored in transparent, shared databases, where they are protected from deletion, tampering, and revision. In this world every agreement, every process, every task, and every payment would have a digital record and signature that could be identified, validated, stored, and shared. Intermediaries like lawyers, brokers, and bankers might no longer be necessary. Individuals, organizations, machines, and algorithms would freely transact and interact with one another with little friction. This is the immense potential of blockchain.

Dozens of blockchain projects related to identity have popped up over the years, with Blockstack ID and uPort being two of the most well-known examples. Microsoft plans to work with DID method implementations, which follow a specific standard outlined by a W3C working group.

No technology is immune from cyberattacks, so identifying and understanding risk is a critical step in deploying blockchain securely. One of blockchain’s benefits is its inherent resiliency to cyber-attack. While not immune to all forms of cyber risk, blockchain’s unique structure provides cybersecurity capabilities not present in traditional ledgers and other legacy technologies.

Microsoft has recently announced that Azure is the first cloud to offer new data security capabilities with a collection of features and services called Azure Confidential Computing. Confidential computing offers a protection that to date has been missing from public clouds, that is encryption of data while in use. Not just data encryption at rest and in transit, but also when in use, i.e. in memory, by software applications. This means that data can be processed in the cloud with the assurance that it is always under customer control.

Confidential computing ensures that when data is “in the clear”, which is required for efficient processing, the data is protected inside a Trusted Execution Environment (TEE), also known as an enclave. TEEs ensure there is no way to view data from the outside, even with a debugger. They even ensure that only authorized code is permitted to access data. If the code is altered or tampered, the operations are denied and the environment disabled. 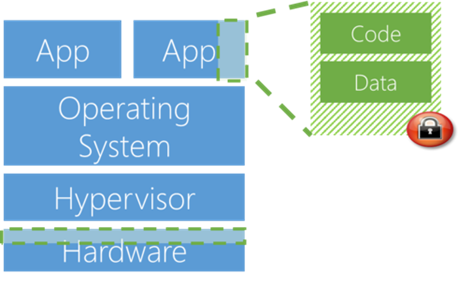 Microsoft’s confidential computing effort in the blockchain space is known as the Coco Framework, an open-source system that enables high-scale, confidential blockchain networks that meet all key enterprise requirements. The Coco Framework achieves this by designing for confidential consortiums, where nodes and actors are explicitly declared and controlled. The use of this same technology implements encryption-in-use for Azure SQL Database and SQL Server. This is an enhancement of the Always Encrypted capability, which ensures that sensitive data within a SQL database can be encrypted at all times without compromising the functionality of SQL queries. Always Encrypted achieves this by delegating computations on sensitive data to an enclave, where the data is safely decrypted and processed.

Blockchain as a Service

Microsoft is advancing the concept of blockchain technology as a cloud service in Azure (BaaS, or Blockchain as a Service) by offering managed infrastructure for deploying single and multi-node digital ledgers like Ethereum, Hyperledger, Quorum in minutes. In addition to computing, networking and storage, Microsoft is working on a brand new tool, Azure Blockchain Workbench, that can stand up the scaffolding around the blockchain application, so users can focus on creating the smart contract-based business logic. Azure Blockchain Workbench is the latest step in Microsoft’s journey to enable customers to adopt blockchain technologies and deliver enterprise-ready, blockchain-enabled applications.

Azure Blockchain is a collection of Azure services and capabilities designed to help enterprises create and deploy a new class of applications for sharing business processes and data with multiple, semi-trusted organizations. Currently customers can deploy these services into their Azure subscriptions and integrate them with blockchains available on the Azure Marketplace. Now, with Azure Blockchain Workbench, the heavy lifting is done for them, so they can focus less on scaffolding and more on logic and smart contracts.

I write about enterprise blockchain and specifically Azure Blockchain on my blog http://blogchain.space/. An article about Azure Blockchain Workbench is being published on the June issue of MSDN Magazine, with more to follow on Azure BaaS and Confidential Computing in the next months.

What are your opinions on blockchain, and where do you see the technology being used? Share your thoughts in the comments below. Thanks for reading!

I was wondering how Azure Blockchain Workbench (ABW) relates to Project Bletchley as described here https://github.com/Azure/azure-blockchain-projects/tree/master/bletchley

Does it supersede project Bletchley or is it part of it? With Cryptlets being a major part of the Bletchley whitepaper and not seeing any of that in ABW it seems ABW is not part of Bletchley. Also, Bletchley not mentioning anything about a workbench anywhere.

Would be useful to know the relation between the two. Developments go with the speed of light in this domain and it would be shame to focus on something that is not current anymore.

Bletchey and cyptlet are not names in use any longer. Bletchey was an internal project code, which evolved into Azure Blockchain Workbench. The initial name of ABW was App Builder, to be turned to Workbench in the last weeks before release.

ABW brings the connection to on- and off-chain data into smart contracts. That's what a cryptlet does. But we don't call it cryptlet anymore :)

Please not, ABW is still in preview, although public. Its roadmap is still shaping as anything in the blockchain space is still taking shape properly. So I'm sure we will hear more of announcements and R&D projects / experiments in the near future, which eventually will merge into a proper offering or product. Coco framework is one of those...

Thanks for the quick reply! That clears things up :)

What about the Coco framework? Any idea when they will be releasing this?

A question for the product group. H2 2018 is the expectation.... so wait for a Christmas present :)