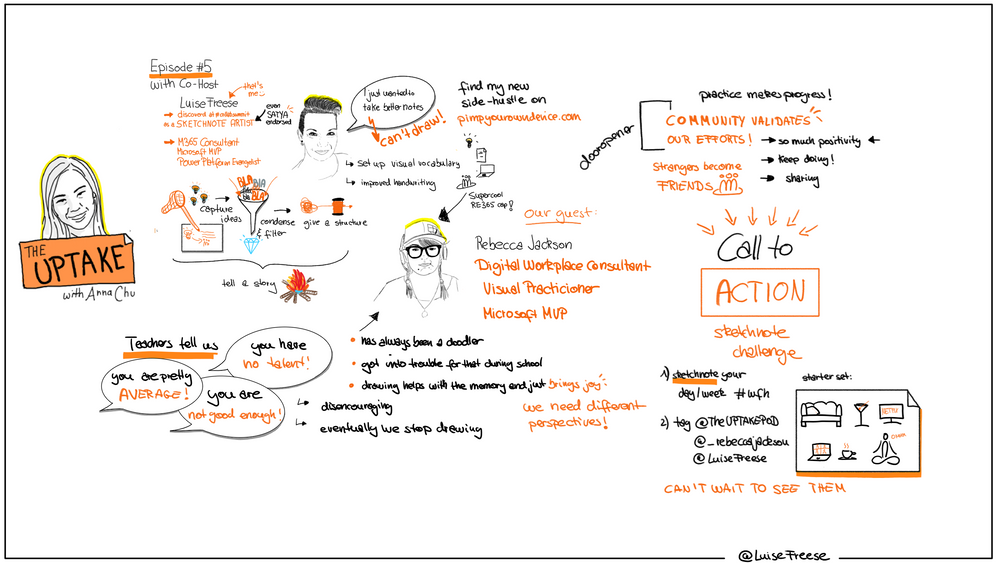 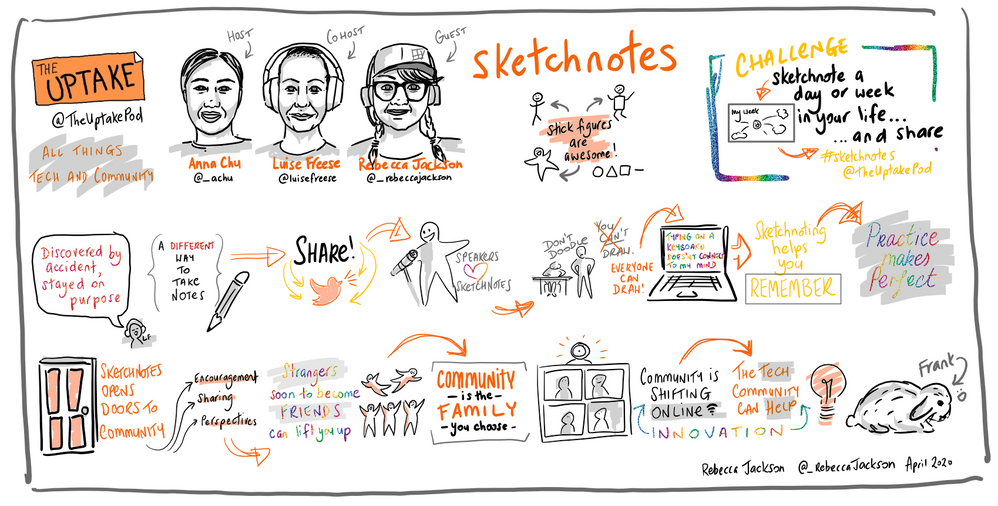 You might think, "I cannot draw" or "I don't have talent." And maybe you are right.  However, the good news is:  sketchnoting is not about art. It's not about performing as an artist or comparing yourself to famous artists like Picasso or Monet. It's not about perfection. It is about communication.  Sketchnotes help people all over the world to better remember what they heard, regardless of their drawing skills. Anna talks with two of our Tech Community's celebrated sketchnoters, Luise Freese and Rebecca Jackson - and Frank the bunny.

Take on our Sketchnote Challenge! Create a sketchnote (digital or on paper) about a day or a week in your life right now, and share it on Twitter with @TheUptakePod, @LuiseFreese, and @_rebeccajackson. 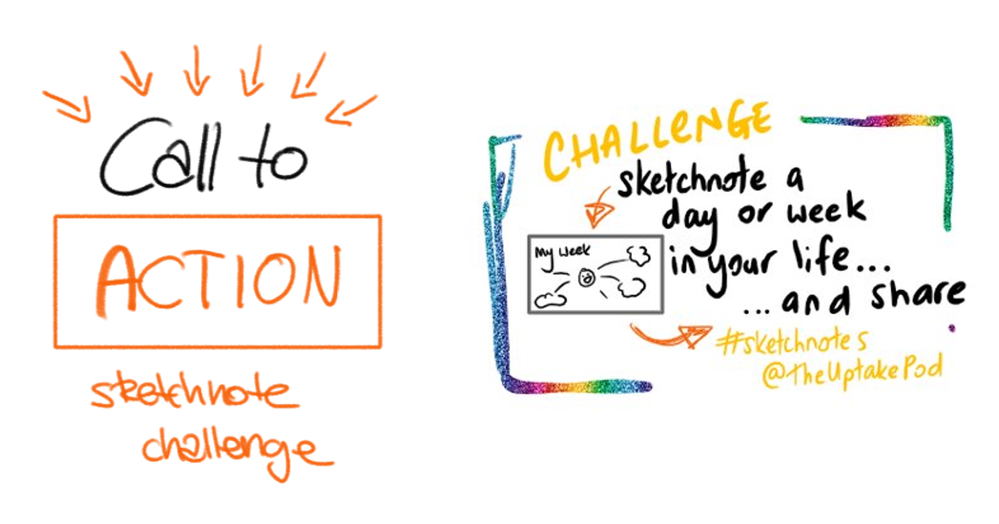 See blog posts by Microsoft MVPs Rebecca Jackson and Luise Freese, which are part of the Humans of IT Guest Bloggers series in conjunction The Uptake Podcast.

Sketchnote Challenge! Send us a sketchnote of your Day/Week-in-the-life! On Twitter, tag @TheUptakePod, Luise and Rebecca, and we'll share it!

Humans of IT Community

Listen and subscribe to other Microsoft podcasts at aka.ms/microsoft/podcasts

Speaking of sketchnotes, what happened to Sketchpad in Windows 10? Whiteboard isn't exactly the best replacement and even Google separated Jamboard and Chrome Canvas.

Hi @pneenkoalabear Windows 10 has Snip & Sketch. @thomasmaurer has a great blog article with an overview of Microsoft Whiteboard in case you're interested in what it can do: https://www.thomasmaurer.ch/2018/07/it-pros-check-out-the-microsoft-whiteboard-app/.

@Anna Chu Snip & Sketch is more like Snipping Tool (although Snipping Tool's main interface is much cleaner) and is also a replacement for Screen Sketch. I'm quite familiar with Whiteboard. You can't use it offline or without an MS account. It doesn't have a protractor or an alternate eraser mode. It doesn't have as many colours either. It's also not as quick to launch as Sketchpad.

Whiteboard is interesting. I don't think it uses WinUI. The settings pane doesn't overscroll and elements in it are blurry. Whiteboard's splash screen recently became hardcoded to be blue too, just like all the other Microsoft apps that got new icons :( I get super off topic below but I'm leaving my little rant here anyway lol

The new icons are stupid too in that they're designed to be shapeless despite Android, iOS and Windows having shaped icons and on Windows they don't follow your accent colour but I'm expecting tiles to be gone in the next feature update. Fingers crossed we also get a Windows 7 like start menu. I actually prefer shapeless icons but Microsoft won't influence Android and iOS. In fact, even Apple and Google create shapeless icons/logos. Google Maps' new icon is shapeless and yet on Android 7 and below it has a white background! Hilarious. https://medium.com/swlh/let-s-talk-about-white-app-icons-ce2e83b9eb86 It should be up to the OEM and user to pick a background colour (recommending dark and light greys ofc) and shape, if any. Problem solved.

What tools do they use for SketchNoting?

I have tried some with Concepts app on iPad. The Whiteboard tool seems very limited, unless I am missing something?

Thanks for the podcast/video series!

Here are some resources on sketchnoting!

iPad note taking with Goodnotes and Notability (not exactly sketchnoting)

Writing neatly on an iPad

Creating sketches based on existing diagrams

Hope these are helpful!

@Rob O'Keefe I use OneNote on Surface Pro to do my digital sketching. There are certainly more full featured sketching tools, but I like OneNote as I use it for all my notes and the simplicity provides benefits for sketchnoting (less is more). I also still sketchnote a lot using pen and paper, and also large scale on butchers paper or the occasional whiteboard.