[Guest Blog] How did a high schooler end up presenting with her dad at Microsoft Ignite the Tour?

[Guest Blog] How did a high schooler end up presenting with her dad at Microsoft Ignite the Tour?

This article was written by a young Humans of IT Community member Isabel Wood, who was a co-presenter with her IT Pro dad, Jeremy Wood at Microsoft Ignite The Tour in Washington DC last month.

I’ve always known that Microsoft existed. I mean, it was all my dad talked about as I was growing up (well, that and Star Wars). Initially, I only thought of Microsoft as a computer company, nothing more. I never thought about the people behind the technology or the amazing impact this company was having on people. That was until middle school when I realized my dad would be going away for a week towards the beginning of the school year. I knew that he was going to a tech conference and would no doubt bring home a ton of stickers and socks, but I didn’t think any further into it.

Then eighth grade came around, which is a pretty big year in my county. The high schools in my county all specialize in a certain area. For example, there is a high school that specializes in languages, so they have tons of languages for students to try that go all the way up to Level Five. I had to decide whether I wanted to be in one if these programs, and if so, which one.

Well, it was during this year that my dad and I made the habit of wearing matching cat shirts to events. So, when my dad went to the tech conference this year, he said that we should wear our shirts on the same day and send each other pictures of us wearing them to show people. I was unsure at first, but then figured that there was nothing to lose. Little did I know that because of this simple decision, I would be able to get so many amazing opportunities and interactions with other tech conference attendees. This soon became our tradition, and still is to this day. Due to the positive response and encouragement from people at the conference, I made my decision to apply to a high school that specializes in Information Technology.

Skipping ahead a couple of years, my dad told me Microsoft would be doing a global Microsoft Ignite The Tour Conference. I was thrilled, especially when he said he signed us up for the one in Washington D.C. The day had finally come, and boy, was I excited. I couldn’t wait to learn so many new things and meet so many cool people. When Day 2 came around, I had finally gotten out of my shell a little and when we went to this talk by a Microsoft speaker Roxy Ndebumadu (who also happens to be a councilwoman!), I couldn’t wait to hear what she was talking about.

Her topic on overcoming fears resonated deeply with me. So, when she asked people from the audience to come up and talk about their experiences, my hand went up. It’s not every day you see a 16-year-old at a government conference, so naturally she picked me. When my dad saw this, he was so shocked. I have always been quiet and shy away from the spotlight. This is mainly because I have bad anxiety and shake whenever I meet someone new. I got up there and was so nervous, but then I started to talk. I later realized that talking in front the group wasn’t too bad after all, and that I actually enjoyed it. Afterwards, on the way home that night, my dad brought up the idea of maybe trying to do a talk like that. I was totally in; I just needed to find a topic I was passionate about.

It didn’t take us long to figure it out.

My dad and I had talked about generational differences in the past and thought it was super relevant especially now that a new generation was coming into the workforce. Plus, it was easy for us to get an inside look due to our own family comprising three generations! Our first thought was to try out for the big Microsoft Ignite Conference in Orlando, but speaking slots were only open to active MVP, MCT, and RD speakers at the time. Still, we kept our hopes up and the amazing opportunity to speak at the next Microsoft Ignite The Tour in Washington DC appeared. Many wonderful people helped create this opportunity for us. @Dux Raymond Sy encouraged us to speak and put in a good word for us with the organizers. @Heather Newman helped review our content and had constructive input on what we were planning on talking about. @ShonaBang, the Microsoft Humans of IT Community Lead, was the person that took a chance on us, even after finding out that we had no prior public speaking experience.

I vividly remember the night that we received the email saying we had a session. I was downstairs because I like to work on homework with my dad in the room, in case I need help. He then called me over and said, “Guess what.” At first, I was skeptical but when he told me the good news, I smiled a big smile and screamed with joy. I ran upstairs to tell my mom. The whole night was filled with congratulations and excitement.

The very next evening, we got right to work.

Eventually we had an outline, then a presentation. My mom, of course, came up with ideas to get the audience involved. Now we just had to practice, and we practiced a lot. We ran through every week for a month, and then the week of the session, we practiced every single night.

Finally, the day came. The morning of our session, it hadn’t hit me that we were going to stand at the front of a room and talk to a fair amount of people.  Lunch is when I fully realized what we were going to do. That’s when the nerves really hit, and I started to get a feeling in my gut that anxiety was taking over. Thankfully, my dad noticed and had us walk over to some ladies that were also speakers. He explained this was my first time speaking and I had started to feel nervous. They were generous and explained to me that everything was going to go great. They also explained that if I forgot something, only I would know, so no one in the audience would notice. They also told me they were planning to attend and would lend support from the audience.

This helped A LOT, and I just remembered their words as people started to file into the room. In the blink of an eye, the presentation had begun, and I was already introducing myself. Due to all the practicing I had done earlier that day, it came naturally. The longer I was up there, the more comfortable I felt. As quickly as it started, it had ended. People started flooding the front with questions and congratulated me and my dad. I felt so relieved that people seemed appreciative. The type of feedback that stood out the most was when a parent would say their child also suffered from anxiety, and the fact that I could do this showed their child could also.

I am so thankful for this wonderful opportunity given by Microsoft to co-present with my dad about "Mentoring Future Technologists" at Microsoft Ignite the Tour.  I hope to get another chance to do something like this in the future. I want to thank everyone that encouraged me and my dad to pursue this. Finally, I want to thank anyone who attended this session and/or said something positive about it.

Doing this meant so much to me. 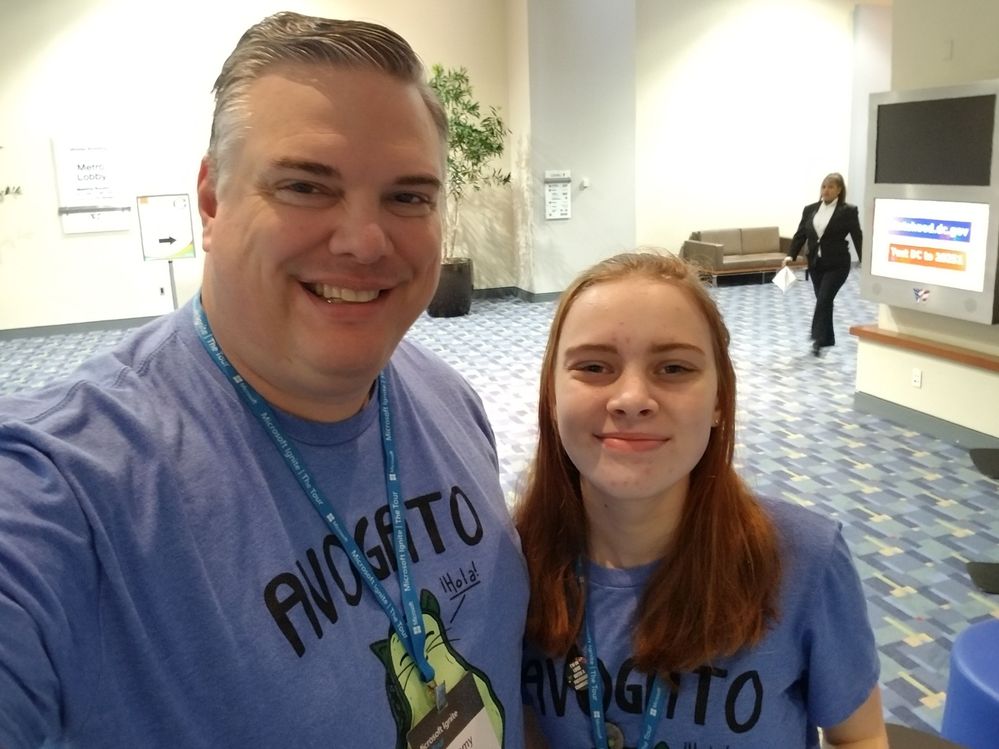