This blog was written by Simran Makhija, Gold Microsoft Learn Student Ambassador. Simran shares their story of building a Tech For Good solution to empower low access communities with coding education to be future ready.

Hi! My name is Simran Makhija, and I am a third year Computer Science Engineering student and a Gold Microsoft Learn Student Ambassador. I have done most of my work in Web Development and JavaScript with a recent interest in product design! Aside from that, I am always up to talk about all things literature and music, and I am a STEMinist, a feminist that believes in the upliftment of women and other underrepresented communities in STEM, and works for the same in Tech.

Pursuing Computer Science Engineering in my bachelor’s was a decision that came naturally to me. I had been exposed to the wondrous world of computers from an early age. My first exposure to programming was a robotics lab in 7th grade. It was in this lab that I coded my first line follower! This was by far the most fascinating experience! In 8th grade, I tried my hands on QBASIC and absolutely loved it. Unfortunately, I moved the following year, and my new school curriculum did not have coding education. Due to inaccessibility of computer systems outside of school, I was unable to learn coding on my own at the time. Nevertheless, these experiences led me to choose Computer Science Engineering as my major in college.

In June 2020, Microsoft and MLH organized the Visual Studio Code Hackathon. I got to know about the opportunity through a post on the Microsoft Learn Student Ambassadors Teams by Pablo Veramendi, Program Director. So, I teamed up with my fellow Student Ambassadors from different corners of the country for the hackathon.

The challenge presented to us was “to build an extension to help new coders learn. For students, by students”. We were new coders ourselves not too long ago and together we figured out a shared struggle in our learning – pen-paper coding assignments and assessments. Even in college, we had all started to learn on pen and paper and could seldom test our programs on a machine, either due to a lack of access or because of time management issues as transferring code to an IDE from paper is cumbersome and time-consuming process. So we decided to make an extension that we wish we had had as new coders - “Code Capture”. This extension allowed you to select an image of handwritten code and populated it to a new code file in the VS Code IDE. It was a weekend spent learning, getting mentorship, coding, debugging and creating a solution we wish we had. 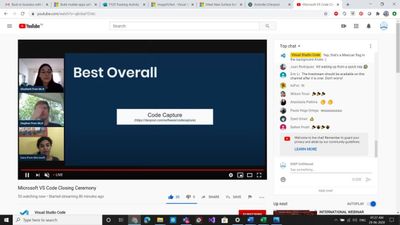 We were passionate about the cause and creating a Tech for Good solution – a passion that was reflected in our submission and we won the “Best Overall” prize. We were ecstatic, we had won a pair of Surface Earbuds each (allegedly the first few people in the country to have them!) and most importantly we won a mentorship session with Amanda Silver, Corporate Vice President at Microsoft.

Almost a month after the hackathon, and equipped with our prized Surface Earbuds, we had our mentorship session with Amanda Silver.

During the session, different possible directions we could work in with our project and decided to create an application based on the concept as an activity for Hour of Code during Computer Science Education Week. 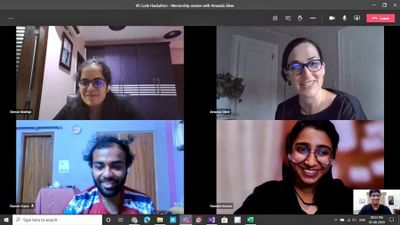 Amanda further connected our team with Travis Lowdermilk, UX Researcher at Microsoft and Jacqueline Russell, Program Manager for Microsoft MakeCode and they were kind enough to set time aside to meet with us. 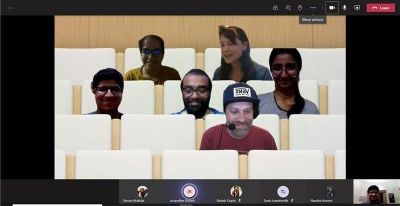 In the meeting with Travis and Jacqueline, they shared their experiences and insights on product development and with the Hour of Code. We discussed our plans for the Hour of Code activity and the possible options we could explore. It was a very insightful and enlightening session. We also got signed copies of the Customer-Driven Playbook as a gift from the author himself.

What is Hour of Code?

The Hour of Code started as a one-hour introduction to computer science, designed to demystify "code", to show that anybody can learn the basics, and to broaden participation in the field of computer science. It has since become a worldwide effort to celebrate computer science, starting with 1-hour coding activities but expanding to all sorts of community efforts. 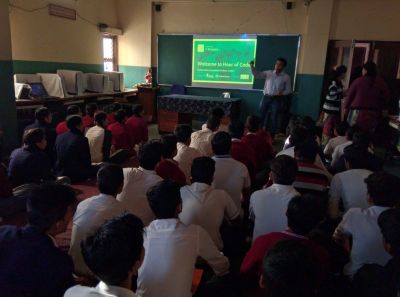 I first came across Hour of Code(HoC) initiative in 2019 when my local community released a call for volunteers for HoC – CS Education Week 2019. Learning more about the initiative, I wanted to contribute to it as much as I could because this was a session that I wish I had attended when I was in school. I joined the organizing committee and led the school onboarding effort. I volunteered in various sessions with middle school and secondary school students, giving them an introduction to the marvelous world of Computer Science.

Following the mentorship sessions and various rounds of brainstorming, we decided to develop an introductory JavaScript tutorial on a web application designed to allow students to easily click a picture of their code, extract to an editor and compile it on their browser. 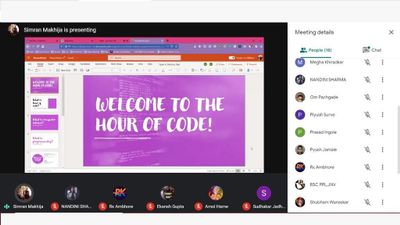 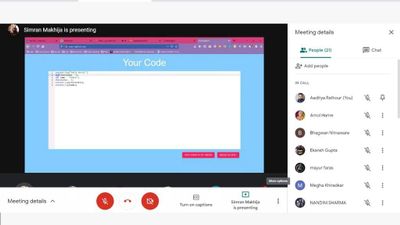 Our team collaborated with folks all over the country to conduct HoC sessions in schools and colleges during CS Education Week 2020. We conducted sessions with over 250 learners who did not have access to computers. This was a heartwarming experience as I was able to give young learners an opportunity to learn to code that I wish I had in school.