Troubleshooting: Cluster UI Says a Server is Already Joined to a Cluster

Troubleshooting: Cluster UI Says a Server is Already Joined to a Cluster

In this post I will discuss a 2008 and 2008 R2 deployment issue which is sometimes seen, and how to get around it.  Let’s say you want to Validate a server, create a cluster or add a node to a cluster.  We have a requirement that a node can be a member of only 1 cluster at a time.  When you try this operation, you may see a message which tells you that one of the servers you want to use, a non-clustered server, is already a part of a cluster and so you cannot continue…why?  The message states "The computer '<Server Name>' is joined to a cluster." 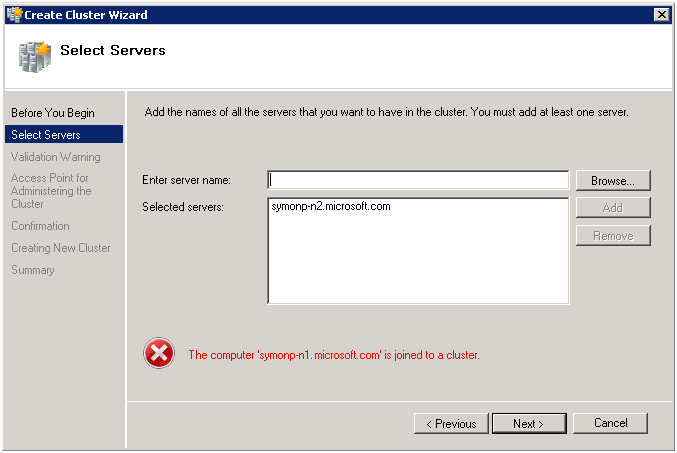 
If you try to connect to that node using Failover Cluster Manager you will see that it attempts to connect, then it will time out after about 5 minutes.

If you check the status of the node using PowerShell, it will report that the node is in a ‘Joining’ state.

If you get into this situation, you can run the following eviction commands directly on the node to properly clean up the cluster components from that node so that you can reuse it in another cluster.


To avoid getting to this state, you should make sure that all of your nodes are online when you destroy the cluster or evict a node, so that the cluster can properly clean up the clustering components on every node.

If you plan to evict a node which has resources on it, you should first gracefully move the resources off it to the best nodes (using Move Group or live migration for VMs).  If you forget, the cluster will still failover the resources for you, but it may not be in your preferred way.