I need the help and strength of the community!

Many of you heard about the "new" Microsoft service called "Microsoft Flow" which allows to automate business tasks. For example, you can send automated approval requests via Office 365 Mail.

Microsoft flow is really great and you can already use it with many connectors also the Office 365 Online Email. But sadly there is yet no possibility to connect Microsoft Flow with Exchange on premise. So you can not yet use any local mailboxes or calendar functions/triggers.

I made a post at the Flow Idea forum so Microsoft considers to implement this connector. Because I think many companies are still using an local exchange server and not the online on and alot of users could benefit from this connector. So it would be great if you can upvote and share this post along the MS Exchange community!

Here is a quick demo video of MS Flow: https://youtu.be/4EKWKJc4b4c 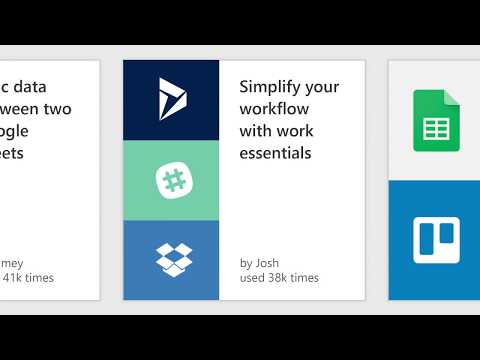 Introduction to Microsoft Flow
youtu.be/4EKWKJc4b4c
See how you can work less and do more. With flow you will be able to automate your repetitive daily tasks. For more information, visit: https://aka.ms/micros...
Labels:

15.3K Views
0 Likes

7 Replies
Reply
7 Replies

What's holding you up from moving mailboxes to Exchange Online?
You're right, there are still many organisations on-premises but more and more are moving to the cloud where possible. You'll find that a great many features of Office 365 don't work if the mailbox hasn't been migrated; Flow isn't the only one.
I doubt you'd get many votes or support from Microsoft for this, being honest.
2 Likes
Reply

Thanks for your reply.

There are multiple factors why we can not go to exchange online.

Anyway you are probably still right, that MS will not care or do anything if not all exchange on prem customers ask for it.

The data security issue has been debunked quite a lot I'd say. You get a lot of control over when/who/if can access that email, you get more protection because of EOP and ATP, and the fact Microsoft sees billions of emails every day and can get on top of threats much quicker than you could on premises. On top of that, it's a guarantee that Microsoft's platform would be more secure/up to date than ANY on-premises deployment. I'm sure you don't deploy exchange patches the moment they come out?

The licensing aspect also doesn't quite stand up in my opinion. If all those companies are hosted on the same exchange server, one company must have paid for all the licenses (the holding company) and charges it back to the other sub-companies. You can't really buy some CALs for one company and some for the other, the system is seen as one from a licensing perspective. So the same would be valid for O365. The holding buys all the licenses and charges it back to the subsidiaries - it's a very common arrangement I've seen a lot at large customers who split up the company by countries.

And the fact that some companies won't be able to move to the cloud because of sensible data is also debunked. The UK Ministry of defence uses Office 365 https://www.telegraph.co.uk/technology/2016/09/07/ministry-of-defence-switches-to-the-cloud-as-micro...

And last but not least, Office 365 makes it easier to comply with GDPR requirements, much easier than if you kept all the data on premises scattered across servers.

"The data security issue has been debunked quite a lot I'd say [...] And the fact that some companies won't be able to move to the cloud because of sensible data is also debunked"

Clearly you've never been subject to ITAR or similar controls... quite simply you require the ITAR version of O365 to be compliant, and this currently requires a significant user count.  Moreover, if you are above ITAR usage, you're out of luck because guess what, Microsoft doesn't comply with those levels very well.

Most common businesses are limited by cost, and that's a big worry when we add it up.  Taking a 500 count for instance.  500 E3 licenses cost 120k per year (lets even say $100k because surely there will be discounts).  That's every year.  For 100k once off, I can get properly designed, current version, virtualized exchange environment on fairly good hardware including licenses once-off can run with a little attention for a long time, and handle a lot of growth.  I know, because I've done it with Exch 2010 and the system only started to crack after 5 years and in the process, doubling the user count.

Is Office 365 inclusive of exchange a bad idea?  No, I think it's the way things are going.  It's not there yet, though, for obvious reasons.

May be stupid question (?):

isn't it possible to get/create single (technical) mailbox in O365 (such as NoReply@....) create a connector and use this in flow to send (all) mails ?

You could buy a single Exchange Online license and configure it just for that, yes. Keep in mind all the regulations you've mentioned you're subject to and that the data will be flowing through Exchange Online for this purpose.

Otherwise, Microsoft Flow has a connector to send emails out that doesn't require any sort of additional licensing: https://docs.microsoft.com/en-us/connectors/sendmail/

Why would you try to use an on-premises Exchange Server to comply with legal requirements in regards of where the mailbox data is stored. But there aren't any constraints to use a cloud based service to process emails?

If you want (are required) to keep the mailbox data in an on-premises Exchange Server platform, you should implement an on-premises workflow solution to process the data.

Otherwise, cloud usage is not only based on certified cloud providers that have to comply with multiple regulatory requirements but also on trust.