My problem is, that the PowerShell script " Sync-ModernMailPublicFolders.ps1" provided by Microsoft throws the following errors: 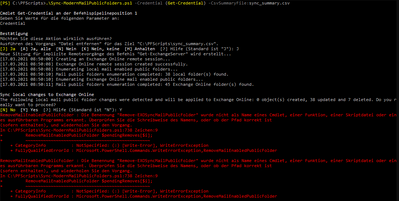 I'm sorry it's in german language, I'll try to translate that):

RemoveMailEnabledPublicFolder : The name "Remove-EXOSyncMailPublicFolder" was not recognized as the name of a cmdlet, function, script file, or executable program. Check the spelling of the name or whether the path is correct (if included) and try again.

I also tried to execute the script on the other 2 servers, without result.

I've possibly found the problem, but I need help from Microsoft:

It seems that the required EXO Powershell commands aro no longer available in Exchnage Online Powershell!

The provided PowerShell script "Sync-ModernMailPublicFolders.ps1" by Microsoft referres to the EXO commands:

If you are still facing error while "Batch migration to migrate Exchange Server public folders to Exchange Online.

After reading this post, you will know about New-MoveRequest Cmdlet.