Turn on suggestions
Auto-suggest helps you quickly narrow down your search results by suggesting possible matches as you type.
Showing results for
Show  only  | Search instead for
Did you mean:
Video: demo of upgrading a CCR cluster from Exchange 2007 RTM to SP1
By

Video: demo of upgrading a CCR cluster from Exchange 2007 RTM to SP1

I also want to make a few points clear. The demo is actually for upgrading the entire CCR environment to SP1, not just the CMS.  It is important that both nodes be upgraded for the entire environment to work properly. I would also like to clarify that at some point in the video, I mention that before you do the upgrade, all resources on CCR-NodeA need to be taken offline or moved to the other node.  You should move the resources to the other node and NOT take them offline. This is because one of the groups should be the default Cluster Group, and if you take that offline, the cluster shuts down.

The following illustrates the environment that was used when creating this video: 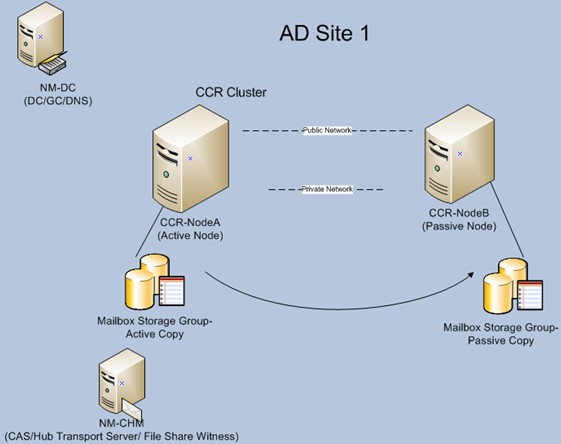 You can find product documentation on "How to Upgrade a Clustered Mailbox Server in a CCR Environment to Exchange 2007 SP1", with very detailed steps, at http://technet.microsoft.com/en-us/library/bb676320.aspx.

Your feedback is always welcome. Thanks for watching. There are more demos on Installing CCR and SCC on Windows Server 2008 coming soon. Stay tuned!