The calculator now includes support for virtualization.  When you enable virtualization, you must be sure to configure the processor architecture  correctly.

For example, let’s say I am deploying an HP ProLiant DL580 G7 (2.27 GHz, Intel Xeon X7560) system which includes four sockets, each containing an 8-core processor, then the SPECInt2006 rate value for the system is 757.

If I am deploying my Mailbox server role as a guest machine using Hyper-V, and following best practices where I do not oversubscribed the number of virtual CPUs to physical processors, then

Since each Mailbox server will have a maximum of 4 virtual processors, this means the SPECInt2006 rate value I would enter into the calculator would be 23.66*4 = 95.

In addition, you must ensure that you enter the correct Hypervisor CPU Adjustment Factor to account for the CPU overhead associated guest machines.  Work with your hypervisor vendor to determine the correct value.

In September I released our guidance on how to lay out database copies to ensure symmetrical distribution of the active copies in the event of a failure. This guidance was further expanded and released as a TechNet article in November.

On the Input worksheet, within the Database Configuration table, you can now have a new option, “Calculate Number of Unique Databases / DAG for Symmetrical Distribution”. When this option is enabled, the calculator will use the permutation formula discussed in our guidance to deploy the correct number of databases based on the number of copies and server architecture such that you can potentially achieve a symmetrical distribution after a failure event.

The calculator includes a new worksheet, Distribution. Within the Distribution worksheet, you will find the layout we recommend based on the database copy layout principles. 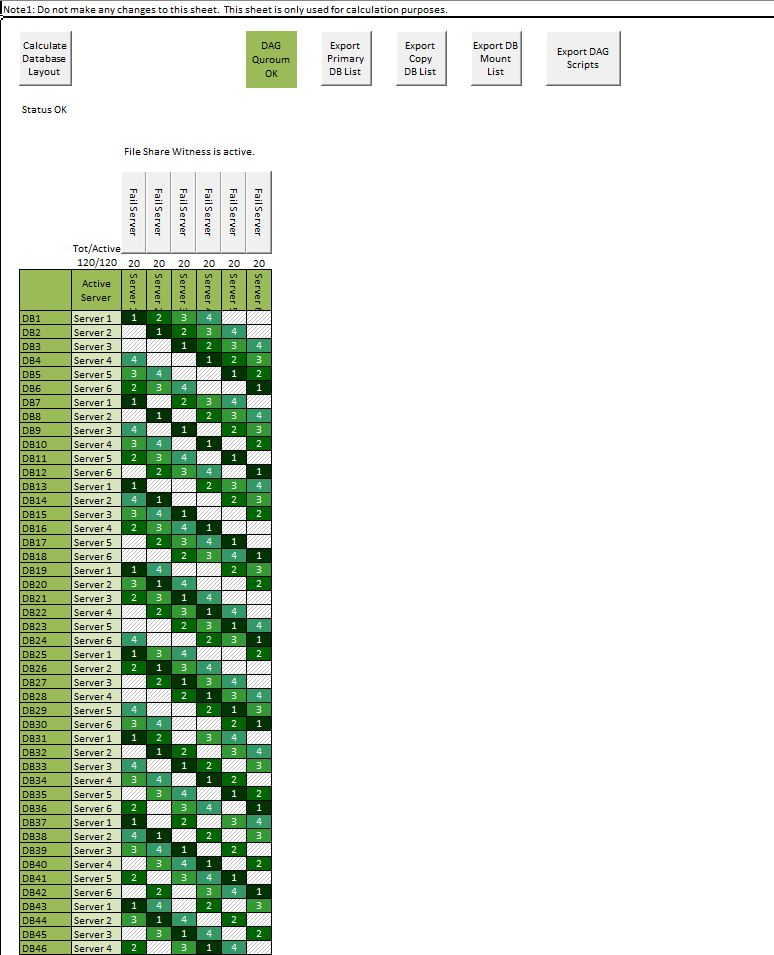 The Distribution worksheet includes several new options to help you with designing and deploying your database copies:

Important: The database copy layout the tool provides assumes that each server and its associated database copies are isolated from each other server/copies. It is important to take into account failure domain aspects when planning your database copy layout architecture so that you can avoid having multiple copy failures for the same database.

Previous versions of the calculator would sometimes result in a storage design output that required zero disks. This was due to the calculator determining based on the input factors (e.g. deploying a DAG with 3 HA copies in the primary datacenter) that a JBOD architecture would minimize the required number of disks. However, if the disk capacity and/or disk type did not meet the requirements to host a database, the calculator would output zero disks. As seen in the following example, notice only the disk requirements for the secondary datacenter are reported in the Total Disk Requirements table:

In order to rectify this logic issue, the calculator has been updated to allow you to choose the storage design you are interested in deploying. The calculator still shows you both the RAID architecture and JBOD architecture disk requirements:

What is new, however, is that within the Total Disk Requirements results pane, you now will have three options:

In addition to the new functionality described above, this version also provides the following enhancements to existing behavior, as well as, corrects several issues reported:

There are only three improvements to the calculator in this release:

It's been a while since we discussed the Exchange 2010 Mailbox Server Role Requirements Calculator. Well I am pleased to say that today we are launching version 3.2 of the calculator.

This version includes the following improvements and new features:

Hey where is Active/Active?

And for those that I know will ask, this version of the calculator does not include the Active/Active user distribution site resiliency scenario. For those that need that scenario, what I recommend is the following:

By implementing the architecture in this way, you can ensure that for the majority of scenarios except loss of datacenter, the users remain operational in their primary datacenter location.

Hopefully you will find this calculator invaluable in helping to determine your mailbox server role requirements for Exchange 2010 mailbox servers. If you have any questions or suggestions, please email strgcalc AT microsoft DOT com.

For the explanation of different tabs and how the calculator works, go here. Yup, we updated that too!

Finally, to get the new calculator - go here.