A few customers exploring the new Outlook Web Access customization features in Exchange 2007 SP1 have asked why when they add a button to the main OWA navigation bar does it appear as a small button only, or commonly stating that the text is "missing".

The answer is relatively simple: To preserve web UI usability the main navigation bar is limited to 6 large buttons.  Additional buttons appear in an over flow bar as small icons with the text as an OWA tooltip (OWA tooltips appear as you hover over a button or feature).  The OWA buttons take precedence over custom defined buttons.  In Exchange Server 2007 SP1 there are 6 OWA buttons by default.

To make a custom button appear with a large icon plus text, you need to remove an existing button from the navigation bar. This can be achieved by using OWA segmentation.  In the example below the "Public Folder" button has been removed, you could choose others. 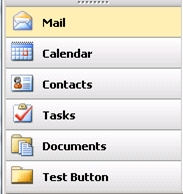 Without removing a default Outlook Web Access button the custom button appears as a small icon only. The over flow bar appears when we go over the 6 button limit.  The example below has 1 default button removed and 5 custom buttons added: 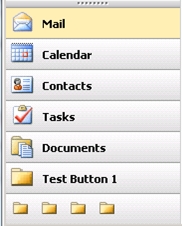 The same two examples from above now with the navigation bar minimized: