This post should be helpful to you if you are planning to install Beta 2 of Exchange Server in your lab. It is not meant to be a replacement for any documentation that is included with Exchange 2007, but is provided as supplementary help.

PLEASE NOTE: You should NOT be installing Exchange 2007 Beta 2 in your production environment unless you have been specifically approved to do so by Microsoft. Please read this if you are thinking of doing this.

Also please note that we do not recommend that you attempt to upgrade earlier versions of Exchange 2007 (such as Beta 1 or CTP builds) to Beta 2 build. There were multiple significant changes since those builds were released and best approach is to start fresh.

Exchange organization prerequisites (if you are joining an existing org):

- Exchange organization needs to be in Native Mode

- If you are installing on a 64-bit machine, you might also get a popup to install a QFE hotfix.

- NNTP service must not be installed

- SMTP service must not be installed

Please see the Release Notes for more information on prerequisites!

Note: Many new features in Exchange 2007 require Outlook 2007 to experience them to the fullest. Example of those would be the new Availability improvements as well as Autodiscover functionality.

Note: The following steps assume that you are running Setup in a simple AD environment with speedy AD replication. Steps for installation into multi AD site and multi domain environment are more complex and will be covered at a later time.

If you have installed all of the prerequisites as listed above, once you double-click on Setup.exe you should see a screen like this: 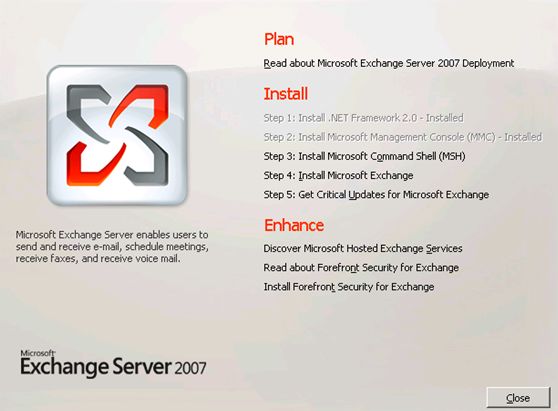 Once you press the "Step 4: Install Microsoft Exchange" link, Setup will copy some files first. Then you will be taken to the 1st step of Exchange Server 2007 Installation Wizard where you can press Next.

You will then have to accept the EULA and press Next yet again.

The next step is deciding if you want to set up automatic error reporting for this Exchange 2007 installation. Please read and make a selection. While we encourage you to enable error reporting, it is not a mandatory step: 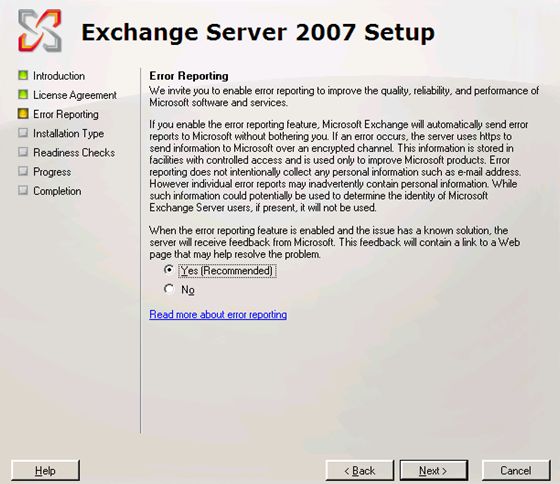 On the next screen, you get to choose what kind of installation you want to run. There are two choices here: 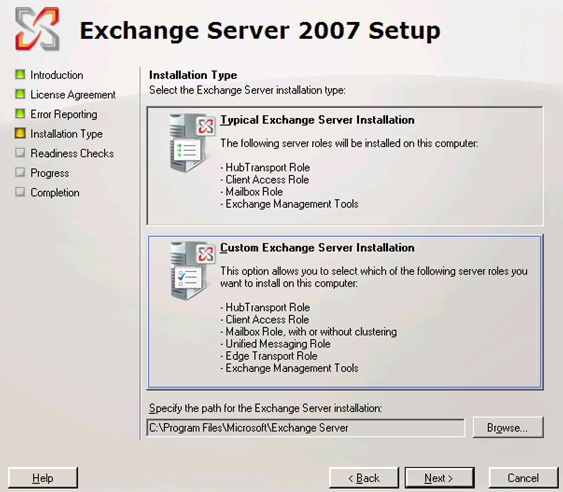 If you pressed the Custom Exchange Server Installation button and pressed next, you will see the following: 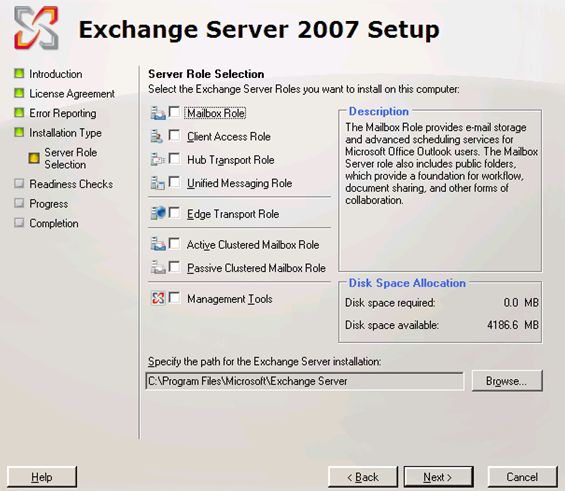 Few next screens will differ on the situation:

Specify the organization name - if you are creating a new Exchange organization, you will get asked for the name of the new org here.

If you are creating a new Org, the next screen asks if there are any clients in the organization that run Outlook 2003 or earlier. The reason why this is important is that - if the answer to this question is "Yes" then Exchange 2007 Mailbox role will also include a public folder database. Seeing that the public folders are an optional component (if all clients are using Outlook 2007) - answering "No" to the above will give you an Exchange 2007 server without a public folder database. 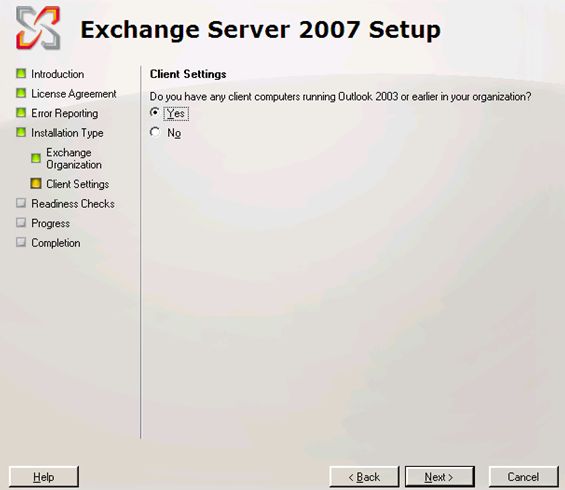 After the above, Exchange 2007 will run prerequisite checks for the roles that you have selected to install. The result of those prerequisite checks will be displayed in the wizard, and can be copied out of the wizard if you want to - by pressing CTRL+C. If all prerequisites are met, the Install button will become available; ideally you will end up with a screen looking like this: 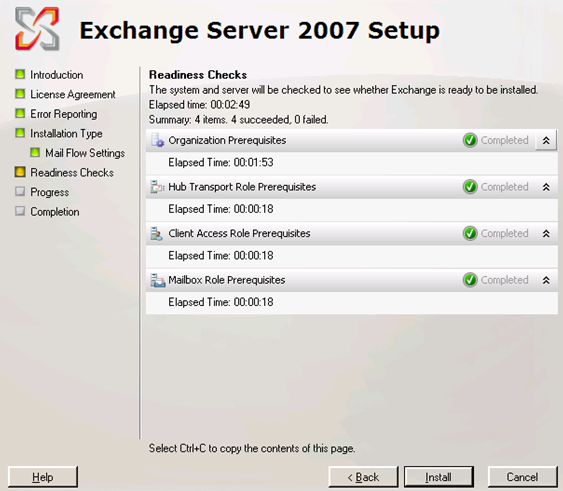 When the Install button is pressed, Setup will be installing the roles you have selected in previous step. The "Organization Preparation" step typically takes the longest of all other steps (if it was not run previously). After all roles are installed correctly, press the Finish button.

If you want to modify your Exchange 2007 installation (add or remove server roles), you should go to Add/Remove Programs Control Panel applet; to add server roles, press the Change button. To remove them, press the Remove button: 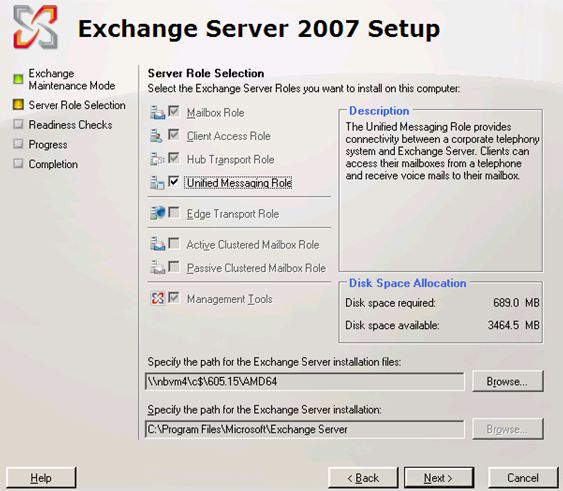 Pressing the Remove button will show you roles that are currently installed as checked checkboxes that can be unchecked. Unchecking the role here and pressing next will start the prerequisite check and then remove the selected roles: 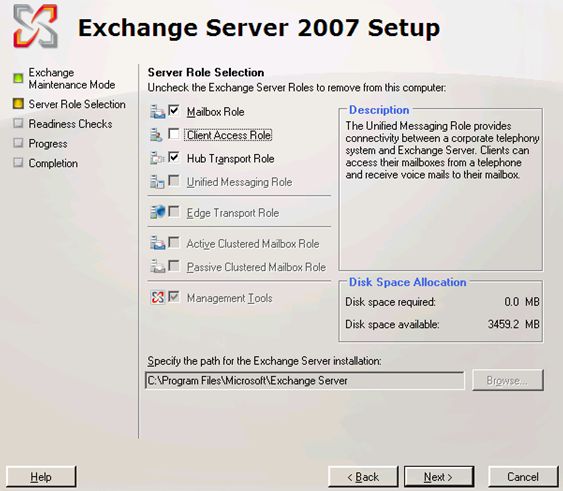 In newer builds of Exchange 2007, all of the Setup logs are stored in a single location, in a folder on the C: drive. The default log path is:

There are several files in there; the ones that are used the most are:

ExchangeSetup.msilog - this log file contains information about the unpack phase of setup where Windows Installer extracts the binaries and places them on disk for use during setup.

Exchange Server Setup Progress.log - this log file was included in previous version of Exchange and contains information related to the configuration data.

ExchangeSetup.log - this log file is new to Exchange 2007 and contains more information about the task that are run in setup. This log is usually the primary log for you to look at Setup problems, especially if there are some server roles that have failed the Configuration stage.

The ExchangeSetup.log is broken out in subcomponents highlighting different levels (indents). These levels can be used by future parsers.

Setup run of this log file are separated by the following markers:

Additionally, major setup tasks are separated by the following: