Turn on suggestions
Auto-suggest helps you quickly narrow down your search results by suggesting possible matches as you type.
Showing results for
Show  only  | Search instead for
Did you mean:
Moderation with transport rules
By

Let's say you have a business process that requires the approval of two different people. Well, with moderation and transport rules, you can automate that process with Exchange 2010 and Outlook 2010.

In this example, we'll set up transport rules so that all messages with 'Project Kiwi' in the subject will be sent for the approval of two people: ej@contoso.com, then administrator@contoso.com

If we created a single transport rule with moderation as the action, and added these two recipients, the message could be approved by either ej@contoso.com or administrator@contoso.com (just like approving a message sent to a moderated group). However, in this case we want approval from both. To do that, we need to create two rules. The order in which the rules are processed specifies who has to approve the message first.

As with any transport rule, you can use any set of conditions with this kind of transport rule. For this example, I've kept it simple (just matching a string in the subject). Here are some screenshots for illustration: 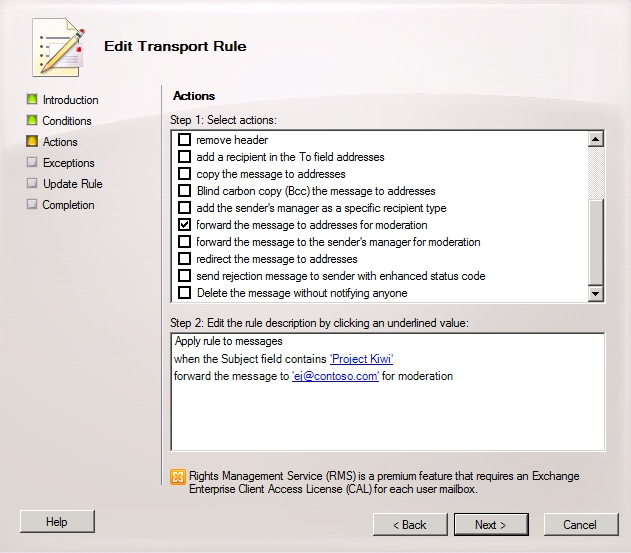 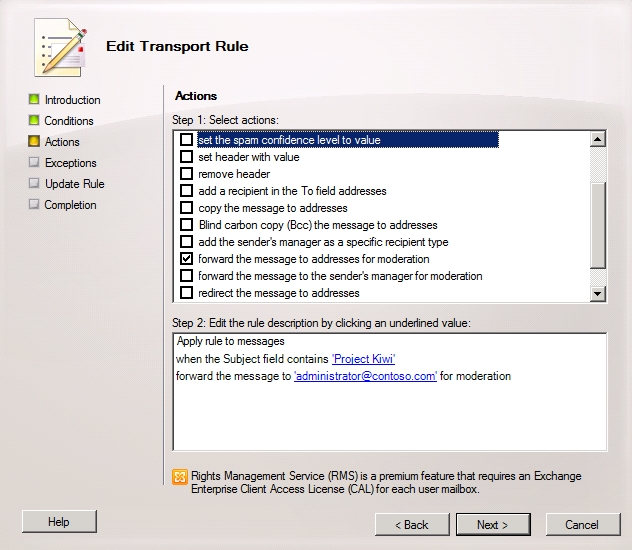 As a result of these rules: when a message is sent with 'Project Kiwi' in the subject line, it will be sent for approval-first to ej@contoso.com, then to administrator@contoso.com. This notes an important behavior in moderation as a transport rule action. When the message is approved, it is processed through transport rules again, picking up where it left off in the order of rules.

In the comments below, please let us know other creative ways you use transport rules or moderation.