Lessons from the Datacenter: Managed Availability

Monitoring is a key component for any successful deployment of Exchange. In previous releases, we invested heavily in developing a correlation engine and worked closely with the System Center Operations Manager (SCOM) product group to provide a comprehensive alerting solution for Exchange environments.

Traditionally, monitoring involved collecting data and if necessary performing an action based on the collected data. For example, in the context of SCOM, different mechanisms were used to collect data via the Exchange Management Pack:

When we started the development of Exchange 2013, a key focus area was improving end-to-end monitoring for all Exchange deployments, from the smallest on-premises deployment to largest deployment in the world, Office 365. We had three major goals in mind:

Managed Availability is user-focused. We want to measure three key aspects – the availability, the experience (which for most client protocols is measured as latency), and whether errors are occurring. To understand these three aspects, let’s look at an example, a user using Outlook Web App (OWA).

The availability aspect is simply whether or not the user can access the OWA forms-based authentication web page. If they can’t, then the experience is broken and that will generate a help desk escalation. In terms of experience, if they can log into OWA, what is the experience like – does the interface load, can they access their mail? The last aspect is latency –the user is able to log in and access the interface, but how fast is the mail rendered in the browser? These are the areas that make up the end user experience.

One key difference between previous releases and Exchange 2013, is that in Exchange 2013 our monitoring solution is not attempting to deliver root cause (this doesn’t mean the data isn’t recorded in the logs, or dumps aren’t generated, or that root cause cannot be discovered). It is important to understand that with past releases, we were never effective at communicating root cause - sometimes we were right, often times we were wrong.

Managed Availability is built into both server roles in Exchange 2013. It includes three main asynchronous components. The first component is the probe engine. The probe engine’s responsibility is to take measurements on the server. This flows into the second component, which is the monitor. The monitor contains the business logic that encodes what we consider to be healthy. You can think of it as a pattern recognition engine; it is looking for different patterns within the the different measurements we have, and then it can make a decision on whether something is considered healthy or not. Finally, there is the responder engine, what I have labeled as Recover in the below diagram. When something is unhealthy its first action is to attempt to recover that component. Managed Availability provides multi-stage recovery actions – the first attempt might be to restart the application pool, the second attempt might be to restart service, the third attempt might be to restart the server, and the final attempt may be to offline the server so that it no longer accepts traffic. If these attempts fail, managed availability then escalates the issue to a human through event log notification.

You may also notice we have dece ntralized a few things. In the past we had the SCOM agent on each server and we’d stream all measurements to a central SCOM server. The SCOM server would have to evaluate all the measurements to determine if something is healthy or not. In a high scale environment, complex correlation runs hot. What we noticed is that alerts would take longer to fire, etc. Pushing everything to one central place didn’t scale. So instead we have each individual server act as an island – each server executes its own probes, monitors itself, and takes action to self-recover, and of course, escalate if needed. 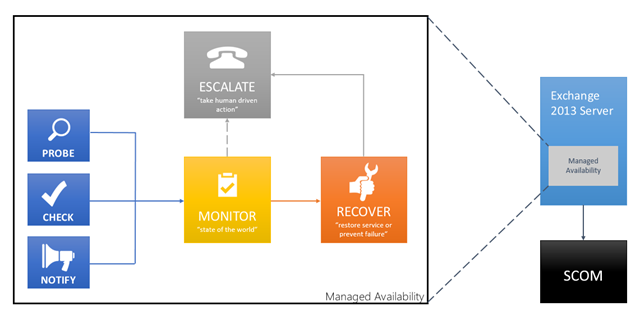 The probe infrastructure is made up of three distinct frameworks:

Data collected by probes are fed into monitors. There isn’t necessarily a one-to-one correlation between probes and monitors; many probes can feed data into a single monitor. Monitors look at the results of probes and come to a conclusion. The conclusion is binary – either the monitor is healthy or it is unhealthy.

As mentioned previously, Exchange 2013 monitoring focuses on the end user experience. To accomplish that we have to monitor at different layers within the environment: 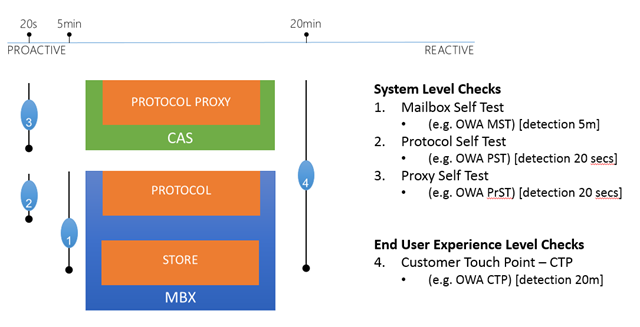 As you can see from the above diagram, we have four different checks. The first check is the Mailbox self-test; this probe validates that the local protocol or interface can access the database. The second check is known as a protocol self-test and it validates that the local protocol on the Mailbox server is functioning. The third check is the proxy self-test and it executes on the Client Access server, validating that the proxy functionality for the protocol is functioning. The fourth and last check is the all-inclusive check that validates the end-to-end experience (protocol proxy to the store functions). Each check performs detection at different intervals.

We monitor at different layers to deal with dependencies. Because there is no correlation engine in Exchange 2013, we try to differentiate our dependencies with unique error codes that correspond to different probes and with probes that don’t include touching dependencies. For example, if you see a Mailbox Self-Test and a Protocol Self-test probe both fail at the same time, what does it tell you? Does it tell you store is down? Not necessarily; what it does tell you is that the local protocol instance on the Mailbox server isn’t working. If you see a working Protocol Self-Test but a failed Mailbox Self-Test, what does that tell you? That scenario tells you that there is a problem in the “storage” layer which may actually be that the store or database is offline.

Responders execute responses based on alerts generated by a monitor. Responders never execute unless a monitor is unhealthy.

There are several types of responders available:

When the escalate responder is invoked, it generates a Windows event that the Exchange 2013 Management Pack recognizes. It isn’t a normal Exchange event. It’s not an event that says OWA is broken or we’ve had a hard IO. It’s an Exchange event that that a health set is unhealthy or healthy. We use single instance events like that to manipulate the monitors inside SCOM. And we’re doing this based on an event generated in the escalat e responder as opposed to events spread throughout the product. Another way to think about it is a level of indirection. Managed Availability decides when we flip a monitor inside SCOM. Managed Availability makes the decision as to when an escalation should occur, or in other words, when a human should get engaged.

Responders can also be throttled to ensure that the entire service isn’t compromised. Throttling differs depending on the responder:

It is important to understand that the monitors define the types of responders that are executed and the timeline in which they are executed; this is what we refer to as a recovery sequence for a monitor. For example, let’s say the probe data for the OWA protocol (the Protocol Self-Test) triggers the monitor to be unhealthy. At this point the current time is saved (we’ll refer to this as T). The monitor starts a recovery pipeline that is based on current time. The monitor can define recovery actions at named time intervals within the recovery pipeline. In the case of the OWA protocol monitor on the Mailbox server, the recovery sequence is:

Systems Center Operations Manager (SCOM) is used as a portal to see health information related to the Exchange environment. Unhealthy states within the SCOM portal are triggered by events written to the Application log via the Escalate Responder. The SCOM dashboard has been refined and now has three key areas:

With any environment, defaults may not always be the optimum condition, or conditions may exist that require an emergency action. Managed Availability includes the ability enable overrides for the entire environment or on an individual server. Each override can be set for a specified duration or to apply to a specific version of the server. The *-ServerMonitoringOverride and *-GlobalMonitoringOverride cmdlets enable administrators to set, remove, or view overrides.

Health sets are further grouped into functional units called Health Groups. There are four Health Groups and they are used for reporting within the SCOM Management Portal:

Managed Availability performs a variety of health assessments within each server. These regular, periodic tests determine the viability of various components on the server, which establish the health of the server (or set of servers) before and during user load. When issues are detected, multi-step corrective actions are taken to bring the server back into a functioning state; in the event that the server is not returned to a healthy state, Managed Availability can alert operators that attention is needed.

The end result is that Managed Availability focuses on the user experience and ensures that while issues may occur, the experience is minimally impacted, if at all, impacted.

Just out of curiosity, how does this all change in an environment *without* SCOM (smaller shops, small businesses, etc.)? I realize smaller shops might just use O365 or another hosted solution, but some will still run Exchange in-house.

have to say that I loved Greg's nickname, great post.

As said by Ross, you have cmdlet to get components states or report. Ex: Get-ServerHealth and Get-HealthReport.

But - why not have a 'Print Version' button in order for us all to print these nuggets of wisdom more easily?  Instead we have to  copy and paste your content into Word and edit the layout for 10 words before distribution to my team!!!!