Turn on suggestions
Auto-suggest helps you quickly narrow down your search results by suggesting possible matches as you type.
Showing results for
Show  only  | Search instead for
Did you mean:
Language Selection in Exchange 2007 OWA
By

Although many Exchange customers standardize on a single language, individual users may feel more comfortable working in a particular language. Microsoft, for example, standardized on U.S. English, but it has offices and employees from all over the world. Some of them may feel more comfortable using applications in their native languages, while still communicating in U.S. English. In Exchange 2003, OWA used the user's client language. That is, it used whatever language IE was set to. While this worked in some cases, it didn't solve the problem in many others. For example, a user at an airport kiosk in New York may have had to use OWA in U.S. English, when this user would have preferred Japanese.

In Exchange 2007, we've made this experience better for everyone, whether you're using OWA from a personal machine or an airport kiosk. The first time a user logs on, OWA displays the Regional Language selection page. The language he chooses here will be the language OWA uses for menus, labels, and other text. 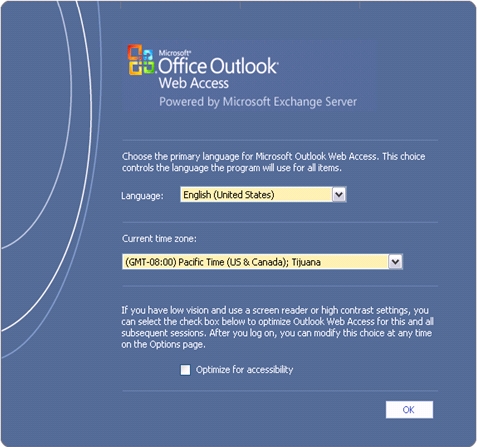 Users can change the language selection in the Options page: 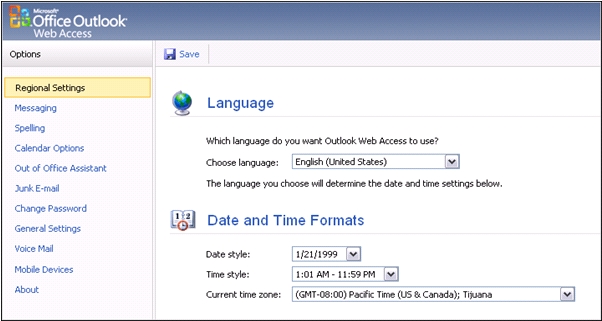 In many cases, forcing users to choose a language on first log on can be important. However, this doesn't have to be the case. Administrators can use the OWA admin tasks to configure the language users see when the log on to OWA as well as the language of the forms-based authentication (FBA) login page. Users are still free to change the language for their individual OWA profile. The -DefaultClientLanguage and -LogonAndErrorLanguage parameters to Set-OwaVirtualDirectory control the default language for OWA and the FBA login page, respectively. LogonAndErrorLanguage also sets the language that error messages are presented in if the user's language selection can't be read. Both of these parameters take a locale identifier (LCID), which is just a number between 0 and 99999999. A value of 0, which is the default, means that the language selection is undefined, so the user should be prompted. For example, to set the default client, logon, and error languages to Arabic (LCID 1025):