For a brief period of time on August 9, 2008, a pre-release version of Update Rollup 4 for Exchange Server 2007 Service Pack 1 (KB952580) was inadvertently made available to Microsoft Update, the Microsoft Update Catalog, and Windows Software Update Services (WSUS) servers for download. While we quickly removed the update from Microsoft Update within a short period of time, some servers using these distribution methods might have detected, downloaded and/or installed this version of the update.

The following known issues exist in the pre-release (version 8.1.311.1) of Update Rollup 4 for Exchange server 2007 Service Pack 1 (KB952580). Also included are recommended steps to resolve this for customers who encounter any of the issues.

To identify the version of the Rollup that you have installed, press the "Click here for support information" link for the update, under Add or Remove Programs (or Programs and Features) applet in Control Panel: 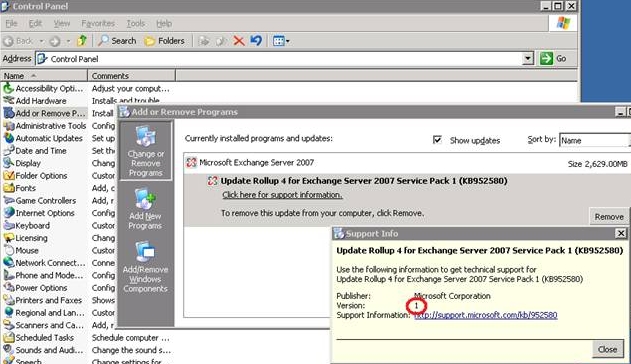 Identification of the rollup version via the Registry:

To identify if the rollup is installed via the registry, the "DisplayVersion" value shown below will be 1. The final release version of the rollup will have a value data of 2 or higher.

We apologize for any inconvenience this may have caused and we are working to make sure this does not happen again.