We’re happy to announce the latest updates to the Exchange Server 2013 Deployment Assistant!

We’ve updated the Deployment Assistant to include the following new scenarios:

In case you're not familiar with it, the Exchange Server 2013 Deployment Assistant is a web-based tool that helps you deploy Exchange 2013 in your on-premises organization, configure a hybrid deployment between your on-premises organization and Office 365, or migrate to Office 365. Supported on most major browsers, the tool asks you a small set of simple questions and then, based on your answers, creates a customized checklist with instructions to deploy or configure Exchange 2013. Instead of trying to find what you need in the Exchange library, the Deployment Assistant gives you exactly the right information you need to complete your task. 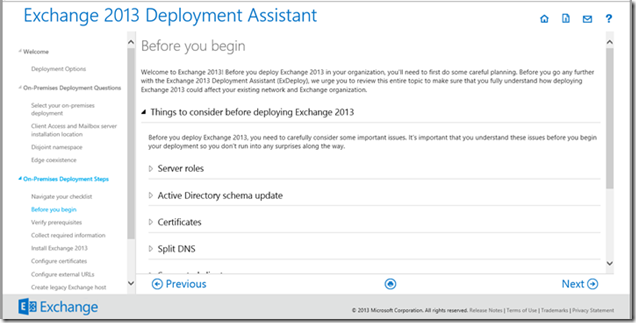 Very Nice :) Thanks from all the Exchange On-Premises customers that will use this tool and going to upgrade to Exchange 2013 soon :)

I'll be testing this in my lab ASAP!