By this time, you all must be already aware of new anti-spam features provided in Exchange Server 2003 SP2.

Alexander Nikolayev discusses all the anti-spam features of Exchange server 2003 SP2 in his article at: http://blogs.technet.com/exchange/archive/2005/07/18/407838.aspx

These anti-spam features execute at different stages during SMTP session. You can now deploy Exchange Server 2003 SP2 server behind the perimeter and still benefit by using the Connection filtering. 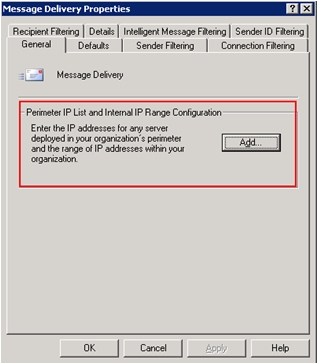 1. Exchange Server 2003 SP2 implemented on perimeter
In this scenario, the IP address of connecting server is NOT listed in the local IP list

2. Exchange Server 2003 SP2 implemented behind perimeter
In this scenario, the IP address of connecting server is listed in the local IP list

Note:
RBL Connection Filtering is executed immediately after the connection is established, but the results are presented after RCPT TO: command.  This is done to accommodate the exceptions to the block list service rules.

0 Likes
Like
Share
9 Comments
Not applicable
Where would a third party spam filtering solution (i.e. Brightmail) fit into this? If you've installed a third party solution on the Exchange server, are all messages scanned by both spam filters, or does one of them somehow take precedence?
0 Likes
Like
Not applicable
I believe brightmail links up to the PRECAT queue while IMF links up to the POSTCAT queue..

So brightmail would scan the message first..

Sincerely,
Tonino Bruno
0 Likes
Like
Not applicable
IMF is a *protocol* event sink. As pictured above it hooks up to the _End_of_Data command. (CRLF.CRLF). After the messages passes the above stages they are submitted to the Exchange's advance queuing system.
Brightmail is a *transport* event sink, which is inside advance queuing.
So if installed on the same server IMF (along with the above filtering methods) will be engaged prior to Brightmail for messages comming through SMTP.

0 Likes
Like
Not applicable
When we first added the IMF, we set it to "No Action" because we wanted to just watch the performance monitor counters to see how it was doing. Once we did that, though, we got absolutely killed with spam. When we then enabled the IMF blocking, the spam dropped down to a more reasonable level. That led us to believe that the IMF was somehow interfering Brightmail because there was a drastic increase of missed spam with IMF (no action) + Brightmail that we had with Brightmail alone.

Is there any case where the IMF will effectively bypass a third party spam filter?

Since we've had the IMF and Brightmail enabled, many of our users swear that they're getting more spam than they did before when it was just Brightmail. It would be nice to be able to reassure them that both filters work nicely with each other, but so far I haven't been able to get a definitive answer on that.
0 Likes
Like
Not applicable
Why is sender-id hooked up to the End_of_Data command?
For as far as i know everything you need for sender-id (apart from looking up the DNS record) is already provided by the sender.

Sender_ID is based on PRA which is determined from RFC2822 headers (Resent-Sender, Resent-From Sender, From)

There is no “MAIL FROM” in RFC 2822, there is FROM, which the outlook user sees.

Thanks Konstantin for the answer!
0 Likes
Like
Not applicable
We have our own edge services running just fine, as it seems MS is about 2 years behind the curve in their "innovations". My question is, given that we have a successful exchange implementation by not exposing it to the edge at all, will all the default SP settings be a transparent install?

0 Likes
Like
Not applicable
Tom, Exchange 2003 SP2 upgrade will not make any changes to the implementation you have in place (you will need to uninstall the IMFv1 if you have it installed on the upgrading server). In order to take advantage of the new features you must manually enable them, out of the box they are not enabled.
0 Likes
Like