Turn on suggestions
Auto-suggest helps you quickly narrow down your search results by suggesting possible matches as you type.
Showing results for
Show  only  | Search instead for
Did you mean:
Exchange Server 2003 Service Pack 2 DSProxy Referral Process Changes
By

Prior to Exchange Server 2003 Service Pack 2, Outlook MAPI clients would receive either a referral to a global catalog server or use the Exchange server to proxy directory related requests; specifically, Outlook 2000 clients and above support and utilize the DSProxy Referral process by default (with the exception of Outlook 2003 RPC over HTTPS which utilizes the proxy mechanism with Exchange Server 2003 SP1 and later).  This means that after the Outlook client connects to the Exchange Server, the DSProxy service passes a referral back to the client.  From that point on, all future directory requests are sent directly to the referred global catalog server.

In this scenario, the global catalog will be from one of two locations:

1.    The GC is located within the same AD site as the Exchange server (normal behavior).

2.    The GC is located within an AD site that is directly connected to the Exchange server’s AD site (when all in-site GCs are unavailable).

This poses a few issues in multi-domain environments where DomainPrep has been executed against the domains.  Specifically, if an Outlook client is referred to a global catalog server that doesn’t reside in the same domain as the mailbox-enabled user, then that user will be accessing data that is in a read-only fashion.  This means that updates to certain objects (whether it be updates to the mailbox-enabled user like delegate access, or distribution group membership) may fail.

·         Updating membership of distribution groups that reside in UserDomain.

·         Assigning delegate permissions against their mailboxes (which reside in UserDomain).

·         Publishing certificates to the GAL (via Publish to GAL option in Outlook).

For more information about Pre-SP2 behavior and its potential issues, please see:

·         "Do not have sufficient permissions" error message occurs when you use Outlook Address Book to manage distribution list membership - http://support.microsoft.com/?id=318074

Here is how the new algorithm will work:

5.    A GC that is one of the GCs that the Exchange Server is currently using – 1 point

So if we have the following scenario where there are two domains, ExDomain and UserDomain, designed as follows: 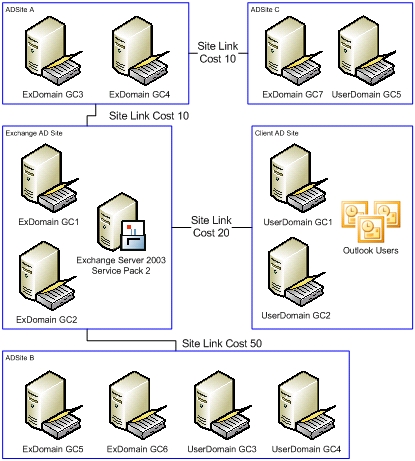 Note: As you can see from the table, ExDomain GC7 and UserDomain GC5 are not included because they are not directly connected to the Exchange server’s AD Site.  In other words, the Exchange server will never utilize those global catalog servers for DSAccess or DSProxy functions.

The following items will need to be reviewed in your infrastructure:

·         Unless there is prior consideration in terms of network design this change may result in clients being referred to undesirable global catalog servers from a network perspective (latency, bandwidth, utilization, number of hops).  It is recommended to consider network implications prior to implementation.