Along with the public release of Exchange 2007 Beta 2, we are today releasing an update to ExBPA v2.7 called the "Exchange 2007 Readiness Check". This is a new type of scan that you can run against your existing Exchange deployment. Its purpose is to provide a 'to do' list of changes and decisions that need to be made before Exchange 2007 can be deployed. Armed with this analysis, you can spend the next six months getting ready, so that when you crack open the Exchange 2007 DVD, you can get up and running as quickly as possible.

When you get to the selection of ExBPA scan types, you will see the new scan type: 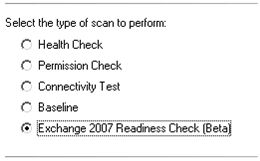 The checks performed by the new scan are similar to the pre-requisite checks implemented (via ExBPA) in the Exchange 2007 Setup program. However, the new scan focuses on overall topology readiness and not the ability to run Exchange 2007 on the local computer. The scan also performs a deep analysis of each existing Exchange 2000/2003 server to verify that it has the necessary updates and configuration in-place to support Exchange 2007. The end report is structured as follows:

Critical - A configuration problem that will prevent Exchange 2007 from being deployed in the organization. For example, an Exchange 2003 server that is not running Service Pack 2.

Warning - A configuration item that may prevent customers having the best possible experience with Exchange 2007. A warning may also reflect some functionality that is not available in Exchange 2007. For example, 2-node active/active clustering.

If you already have ExBPA v2.7 installed, you will receive an update notification the next time you start the application.

1. The new scan type says 'Beta', what does this mean?

The checks performed by the new scan are based on the requirements of Exchange 2007 Beta 2. As we drive towards RTM those requirements may change a little. Additionally, the documentation for the new scan is still under development. We will be adding article links over the next few months.

2. I ran the scan and have questions about the results. What should I do?

If you'd like to read more about the requirements of Exchange 2007, download the Beta 2 documentation from http://go.microsoft.com/fwlink/?linkid=69162. NOTE: The documentation on the web is more up-to-date than the help file (exchhelp.chm) included with the Beta 2 installation media.

3. I ran the scan and received unexpected results. If I think there's a bug, who can I contact?

If you need assistance, please go to the microsoft.public.exchange.tools newsgroup.

4. Is this new functionality available in all languages?

No. During the beta phase, the check is only available for U.S. English versions of ExBPA 2.7.

5. I'd like to know if my computer is capable of running Exchange 2007. Can I use ExBPA to check this?

No. The new ExBPA scan verifies the state of the topology and existing servers, not the local machine. The list of installation requirements is included in the Exchange 2007 Beta 2 documentation. Alternatively, you can download the Beta 2 software and run the Setup program to verify that the local configuration of the computer is able to support Exchange 2007 Beta 2.

6. Where can I look at the list of checks made in this new scan?

A. If you're familiar with the BPA XML files, the new check is wholly contained within the ExBPA.Readiness.xml file. A summary of the checks is as follows:

-      Categorizing the deployment as either 'Simple', 'Standard', 'Large' or 'Complex'. This will help guide the customer to the best starting point for upgrade documentation.

-      Identifying Active Directory domains that are not in native mode.

-      Identifying Active Directory sites that do not have a global catalog server running Windows 2003 SP1 or later.

-      Verifying that there are zero Active Directory Connector servers in existence.

-      Verifying that the Exchange organization is in native mode.

-      Identifying any non-MAPI public folder hierarchies (a.k.a. AppTLH's) in use

-      Identifying any SMTP Connectors that use inline domain-wildcarding for address spaces (e.g. *foo.com instead of *.foo.com).

-      Identifying any EDK-based Connectors in the topology (excluding Notes).

-      Identifying any SMTP virtual servers that are not using port 25 for incoming/outgoing.

-      Identifying any 2-node Active/Active clusters in the topology.