Usually there is one question that is always asked when dealing with mail-enabled public folders: How does the message get delivered to a replica?

To answer that question, let's take a walk down memory lane.

In Exchange 5.5 we used to store replica information in the directory (aka "home server" field on public folders). This allowed us to determine a replica to route to immediately upon categorization of the message.

This did have its faults though. You had to manage each public folder and its home server designation (i.e. a single point of failure). In addition, because we did store that information in the directory, DS/IS Consistency Check needed to be executed routinely to clean up the directory or to re-home the replica if the site containing it was no longer present.

In Exchange 2000 / 2003 we moved away from storing replica information in the directory and instead just stored it within the public folder hierarchy. Now the only thing stored in the Active Directory is a proxy object for the public folder that basically tells us the email address and that it's a public folder proxy object. So as a result of these changes we had to change the way transport dealt with SMTP messages destined for public folders.

2. Transport categorizes the message and obtains a list of all PF stores for that hierarchy.  We then pick a store and route the message to it:

a. If a PF store is on the same server, we use that.

b. If there are no local PF stores, then we'll use a PF store in the same routing group.

c. If there are no local PF stores in the routing group, then we use the first entry in the list from msExchOwningPFTreeBL entry.

This list always has the most recently added public folder stores to the organization at the top (and as a public folder store is created when a new server is installed, normally this means the most recently installed servers will be at the top of the list). What could happen is we pick a server that has just been added to the org and may not have the full public folder hierarchy yet (and hence not know what to do with the message). To prevent this in Exchange 2003, we don't select any stores younger than two days, unless there is no alternative. See http://support.microsoft.com/kb/328870/en-us for more information on use of PF store Age in routing decisions.

3. If there is a replica on this store, then the message is simply delivered. If not, the store returns the location of the closest replica and hands the message back to transport – which then sends it on to the store which actually holds the replica.

In Exchange 2007 we made some fundamental changes to the way transport works (see http://technet.microsoft.com/en-us/library/aa998825.aspx for more information):

So how does that change Public Folder mail routing? Well let's take a look at the stages.

1. First and foremost, if the list contains any legacy Exchange PF stores, they are removed if Exchange 2007 PF stores exist. Age of the store is not considered when building this list.

2. If the choice is between two (or more) Exchange 2007 PF stores, then the following criteria will be used:

b. If there is a local PF store on the same physical machine, we will use that.

c. If there is not a local PF store, then we will choose a store within the local Active Directory Site. If there are multiple PF stores, the first server returned is chosen.

d. If there are no PF stores within the local Active Directory site, then we will choose a PF store in a remote Active Directory Site, sorted by lowest cost (if the choice is between two or more remote AD sites). If the result is a tie, the first server returned is chosen.

3. In the event that there are no Exchange 2007 PF stores, and if the choice is between two (or more) legacy Exchange PF stores, then the following criteria will be used:

b. If there are multiple PF stores, then the first store is chosen.

2. The categorizer looks up the homeMDB attribute of the public folder's directory entry. This tells it which PF hierarchy the folder belongs to (usually there's only one PF hierarchy and that's the default "Public Folders" hierarchy associated with the default public stores that get created automatically).

3. Based on the routing table calculations performed by the Transport service, the "best" public folder hierarchy store ("best" TLH) is used to determine which public folder store contains a replica that can be used for delivery.

a. If the "best" TLH is located within the same Active Directory site as the Hub Transport server, then we proceed to Step 4.

b. If the "best" TLH is not located within the same AD site, we will route the message to a Hub Transport server in the destination AD site by using the routing table to determine the least cost route. We then proceed at Step 1 with the destination Hub Transport server, the message is categorized (Step 2) and the best TLH store is used to determine the public folder store that contains a replica (Step 3a).

4. Instead of transferring the message via SMTP to the hierarchy store for replica lookup, the Hub Transport server will establish a connection to the store service on the mailbox server role that contains the "best" TLH store. The store is then queried to determine if content for the folder (referenced by legacyExchangeDN) is available (IsContentAvailable), which results in a response containing the list of servers hosting the folder if the content is not available locally (store override). The list of servers hosting the folder replica is listed in the same order provided in client folder referrals and the top entry is chosen by transport. This referral tells us to which replica we should route the message, aka, the "best" replica.

5. The Hub Transport server then uses the routing table to determine the least cost route for the server that contains the "best" replica and routes the message accordingly (see http://technet.microsoft.com/en-us/library/aa998825.aspx for more information on how least cost routing occurs).

6. The message gets delivered to the public folder store.

That's right in RTM, we do not consider the age of the public folder store in that case. What does that mean? Well that means we may end up choosing a PF store that doesn't contain the entire hierarchy (as a result of just being created and not having received or processed the hierarchy replication messages). If we choose a PF store that doesn't have the hierarchy we cannot perform a lookup of the replica, and thus we'll NDR the message.

That's not the best situation. So in SP1 the decision tree will be:

So you might be thinking, besides the hierarchy lookup failure scenarios, where might a SMTP based message (and at this point it doesn't even really matter that it is destined to a public folder) queue?

So for the purposes of this discussion, let's discuss each based off of the following diagram (please click on the thumbnail to see the full size): 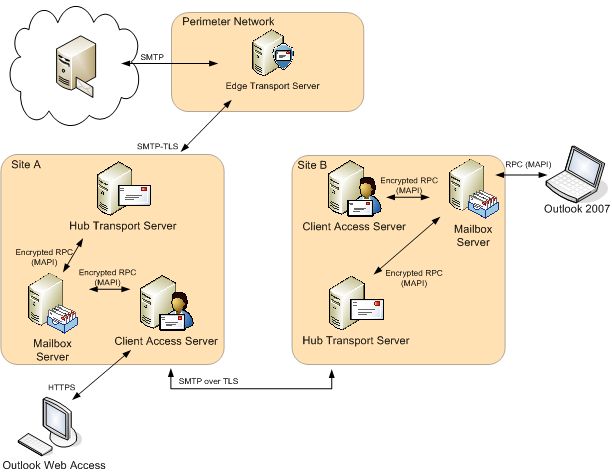 Routing the Message to a Hub Transport Server

Routing the Message to its Destination

Once the Hub Transport server receives the message it will perform the steps outlined in the "Exchange 2007 RTM" section.

There are two potential scenarios that could result in replica delivery queuing and they depend on the location of the replica:

We hope the above information helps explain how the routing process works for mail delivery to mail-enabled public folder replicas.

0 Likes
Like
Share
6 Comments
Not applicable
Great write-up Ross!  Thanks for dispelling/explaining some of the PF delivery and replication black magic.

Had to see the E2k7 bias being fixed in SP1 also :)
0 Likes
Like
Not applicable
I have created a E2K3 org without any PF, just for SMTP inbound purposes, and have added a E2K7 server (RTM). I did not register a edge transport, but the hub transort runs. I tried to mail from Outlook and from an SMTP telnet session, but neither of the mails arrive. In the mean time I did create a PF on the E2K3 server, but removed it afterwards. Still no mail flow to the folder. When I look in the queue dir of my innbound E2K3 SMTP server, the mail gets stuck there in the queue dir.

Thanks
0 Likes
Like
Not applicable
I have created a E2K3 org without any PF, just for SMTP inbound purposes, and have added a E2K7 server (RTM). I did not register a edge transport, but the hub transort runs. I tried to mail from Outlook and from an SMTP telnet session, but neither of the mails arrive. In the mean time I did create a PF on the E2K3 server, but removed it afterwards. Still no mail flow to the folder. When I look in the queue dir of my innbound E2K3 SMTP server, the mail gets stuck there in the queue dir.

Thanks
0 Likes
Like
Not applicable
Weird Problem with Mail enabled public folders.
I have deleted my public folders but for some reason when I do "get-mailpublicfolder" it still shows 2 folders. I don't see how I can remove them. Tried removing the PF database and making a new one, tried making  new folders with the same name and then removing those, to no avail.
These two mail enabled folders show up in my address lists but they don't exist? You cannot browse to them or find them in outlook.

How can I get rid of them?

If those folders don't exist in the hierarchy (so Outlook can't see them) - it could be that the directory objects were left behind when folders were deleted, most likely because of AD replication issues.

I'd go and check the MESO (Microsoft Exchnge System Objects)container and see if directory objects are there. I assume they are, and you can remove them from there if folders themselves are gone. Note that MESO container might exist in any of your domains that has Exchange recipients.

If they are not there either, then I suspect that one of your Global Catalogs has what's called "lingering objects". Again, usually this is due to AD replication issues... There is a KB how to look for those, but if you get our of your confort zone, I'd suggest you call into support!
0 Likes
Like
Not applicable
I'm having problems removing the NON_IPM_Subtree folders Offline Address Book and Schedule+ Free Busy.  When I run Remove-Public folder I get an error.

Remove-PublicFolder : Cannot delete the object 'NON_IPM_SUBTREESCHEDULE+ FREE BUSYEX:/o=Schmitty INC/ou=Exchange Administrative Group (FYDIBOHF23SPDLT)'. Please make sure that you specified the correct identity and that you have the correct permissions to delete it.

What Can I do to correct this?
0 Likes
Like