It’s been a few months since we announced some major changes to our virtualization support statements for Exchange 2010 (see Announcing Enhanced Hardware Virtualization Support for Exchange 2010). Over that time, I’ve received quite a few excellent questions about particular deployment scenarios and how the changes to our support statements might affect those deployments. Given the volume of questions, it seemed like an excellent time to post some additional information and clarification.

First of all, a bit of background. When we made the changes to our support statements, the primary thing we wanted to ensure was that our customers wouldn’t get into a state where Exchange service availability might be reduced as a result of using a virtualized deployment. To put it another way, we wanted to make sure that the high level of availability that can be achieved with a physical deployment of the Exchange 2010 product would not in any way be reduced by deploying on a virtualization platform. Of course, we also wanted to ensure that the product remained functional and that we verified that the additional functionality provided by the virtualization stack would not provide an opportunity for loss of any Exchange data during normal operation.

Given these points, here’s a quick overview of what we changed and what it really means.

Let’s go over some definitions to make sure we are all thinking about the terms in those support statements in the same way.

One of the changes made was the addition of support for the Unified Messaging role on Hyper-V and other supported hypervisors. As I mentioned at the beginning of this article, we did want to ensure that any changes we made to our support statement resulted in the product remaining fully functional and providing the best possible service to our users. As such, we require Exchange Server 2010 SP1 to be deployed for UM support. The reason for this is quite straightforward. The UM role is dependent on a media component provided by the Microsoft Lync team. Our partners in Lync did some work prior to the release of Exchange 2010 SP1 to enable high quality real-time audio processing in a virtual deployment, and in the SP1 release of Exchange 2010 we integrated those changes into the UM role. Once that was accomplished, we did some additional testing to ensure that user experience would be as optimal as possible and modified our support statement.

As you’ll notice, we do have specific requirements around CPU configuration for virtual machines (and hypervisor host machines) where UM is being run. This is additional insurance against poor user experience (which would show up as poor voice quality).

Much of the confusion around the changed support statement stems from the details on combination of host-based failover clustering & migration technology with Exchange 2010 DAGs). The guidance here is really quite simple.

With Hyper-V, it’s important to be aware that the default behavior when selecting the “Move” operation on a VM is actually to perform a Quick Migration. To stay in a supported state with Exchange 2010 SP1 DAG members, it’s critical that you adjust this behavior as shown in the VM settings below (the settings displayed here represent how you should deploy with Hyper-V): 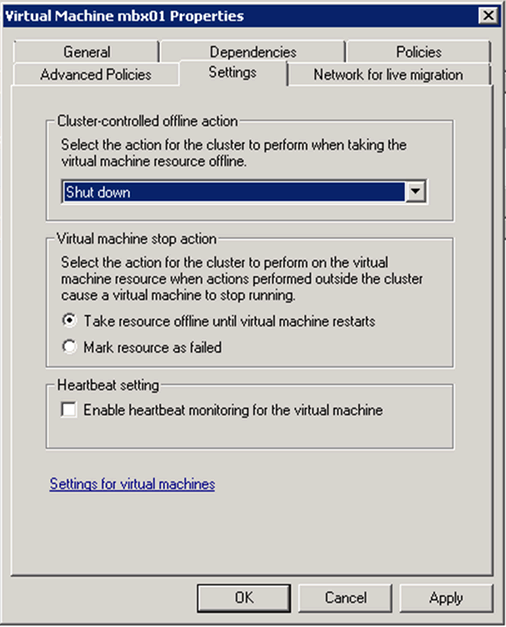 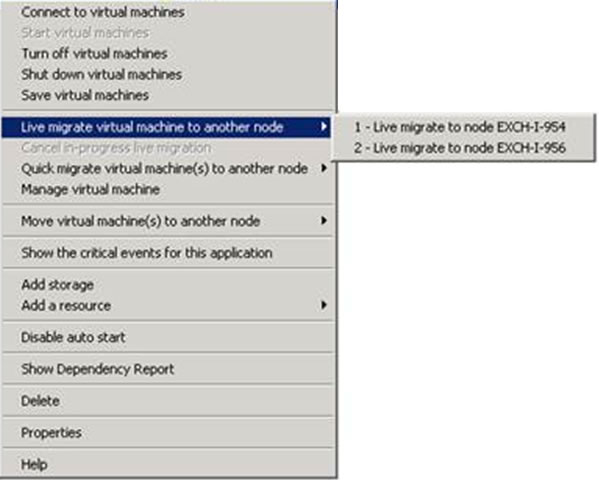 And this is not supported: 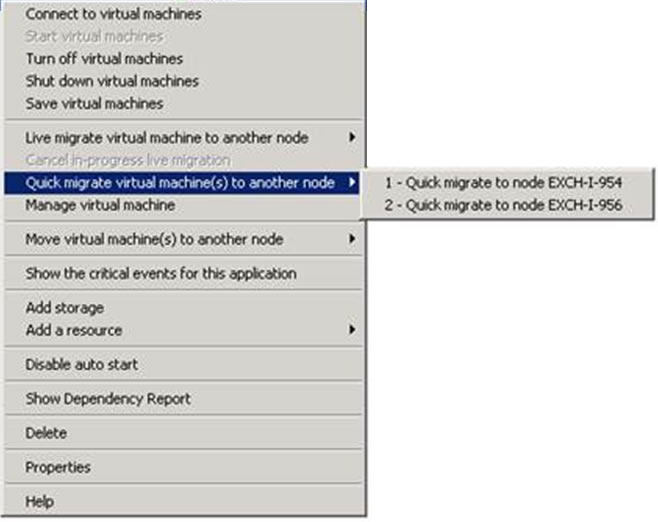 Hopefully this helps to clarify our support statement and guidance for the SP1 changes. We look forward to any feedback you might have!

Jeff, thanks for the added clarity. This should leave no doubts about what's supported and what's not. In general you want to provide redundancy at every layer, so this is great input on the right way to do it.

Jeff, I really appreciate the extended commentary and examples. My only request is that you could find some way to provide this same level of clarity for the 900lb. gorilla in the room -- VMware. To this date, I've not had a single customer ask me to virtualize Exchange on Hyper-V. I'm more than happy to do so for them, but the majority of my customers are already committed to VMware.

If you can't comment directly on the equivalent VMware settings and features, at the very least it would be awesome if you could get someone from VMware to post a follow-up "okay, here's what Jeff's post means for our users, with the corresponding settings and screenshots" blog post that you can then link back to from this post. Same thing for other SVVP vendors. If this post could become a clearinghouse (or you could create a TechNet article that could serve that purpose), it would be really useful for everyone. And it would end a lot of arguments with customers -- we could point them to definitive statements by Microsoft and their virtualization vendor of choice saying "this is what you need to do to be supported."

Also, as a follow-up question: what happens if a customer *does* do Quick Migration or the equivalent on a live DAG node? What do they need to do in order to get back into a supported state?

Jeff, this article will be very helpful in customer discussions.  Devin makes great points too.  In fact, this is the real issue.  Customers will say “oh yeah well Microsoft’s Hyper-v can’t do what VMware can, so that’s the only reason blah blah blah...”  I know this to be untrue, but until we can get both vendors using similar terminologies it will be a heated conversation.  Specifically, VMware needs to be encouraged to call out what should NOT be done with Exchange workloads.  Many VMware admins just think “VMware knows better” and assumes all settings are fair game.

Jeff is it still a requirement that UM is running seperatly from the other roles?

In a physical setup it is possible to a do a multi role server with the CAS/HUB/MBX/UM role.

Especially in smaller setups this would save licenses.

Quick Followups I see in the comments:

I'm not sure how VMware is an unaddressed 900lbs gorilla.  You can hit the SVVP page linked, see VMware's support matrix and go from there and then every technology referenced form there on out is defined in the blog in general terms (and highlighted no less).  Just "define" VMware HA/FT/Vmotion and it will become clear very quickly how it applies.

To combine rolls in a VM you have to consider a couple of things.  FIrst off every role has a cpu count requirement, usually easy to hit in the physical world due to multi-core systems and often impossible to hit in the virtual world due to vcpu limitations (until VSphere 5 or Hyper-V 3 at least).

These all require no more than 2:1 ratio vcpu/core.  So we Add UM into the mix and you can do the math from there.  In theory a single guest/vm with all roles on one would need 12vcpu, and no fewer than 8 cores worth of processors.

This of course ignores NUMA footprints which have a huge impact on memory performance and is another factor... not to mention vsphere licensing (cough cough)

Going Multi role shouldn't be a cpu issue, as long as your environment is small enough.

technet.microsoft.com/.../dd346699.aspx states a minimum of 2 processor cores for Multi role.

Adding the minimum of 2 cores for UM to that would make 4 cores.

I do understand that larger environments would hit this core issue, but that doesn't differ from virtualizing Multi role with or without UM.

Why shouldn't I monitor heartbeat inside VM ? (not selected on the screen-shot)

Hey, I justed watched a presentation from a storage vendor and he indicated that there was an announcement at TechEd 2011 that indicated that a cold boot was no longer required for a vmotion or application move.  He indicated the cold boot requirement was a Pre-SP1 requirement and no longer an issue. Thus far, I have been unable to find anything that shows that to be the case.  Is it the case?

To be clear Kay, that TechNet article states minimum _sockets_ is 1 (written as "1 x processor core").   Remember a vCPU is a single core, not a single socket.  Now run the sizing calculator and see where you end up.