Turn on suggestions
Auto-suggest helps you quickly narrow down your search results by suggesting possible matches as you type.
Showing results for
Show  only  | Search instead for
Did you mean:
Building Exchange Server 2007 labs/demos often? This is for you!
By

Hi! This is my first post to the Exchange Team Blog - hope this is of use! My name is Robert Gillies, and I'm a Senior Consultant in the Federal Civilian Practice of Microsoft Consulting Services. One of my recent projects for one of my customers had to do with automating the install of Exchange 2007 SP1. I went to TechReady (our Microsoft "internal TechEd") in the fall and didn't find anyone who had a good demo script on how to do this type of scripted deployment that could be used for an enterprise customer. That made me think that maybe I should do something that could be presented to help other people that might just need a good starting point for their own installs. No matter how big your organization is, if you want to build Exchange 2007 labs, this can help you!

So - I wrote a script for my customer and trimmed it down for a presentation. I presented this script at the spring TechReady in January, and then April 8th I presented it at INTERACT2008 (http://www.interact08.com). I'm currently scheduled to present this at TechEd Orlando in June as well. Included below is, the script and the CSV files used by the script, and the remainder of this blog entry is a discussion/description of how to configure your own lab so that you can run these scripts on your own.

The goal of this exercise was to have a single script that could be run on a given machine, and based on the server naming convention install the appropriate roles and possibly make some configuration decisions. The customer I am working with for this has a very well defined server naming convention which makes this possible. One possibility for a change would be to have a CSV file that would define the Exchange roles based on what the installation team put into the file as opposed to being strictly name based.

Please note: below procedures and scripts were tested only in lab environments! This script is not officially supported by Microsoft.

The server naming convention that was used for this lab/demo is as follows:

Using this naming convention, that will give us the following server names in our lab:

The lab that we will be creating can be represented using this diagram: 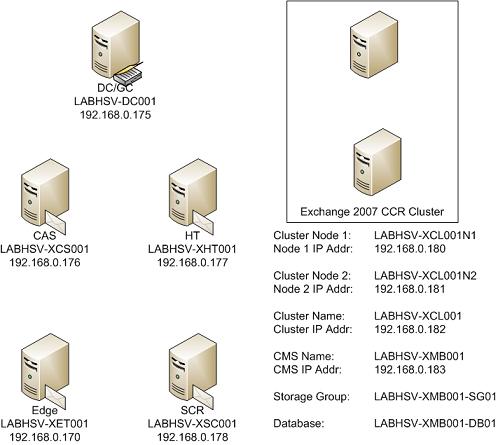 Now I'll just list out what I did to build these servers so that you can build your own!

- Ensure that all machines in the lab are connected to the same network. If you want to update these machines to the latest patch levels, this network should connect to the Internet.

- DCPromo - I typically allow DNS to be installed by DCPromo process for these simple labs where I'm only going to have a single DC.

- Add reverse lookup zone. This is probably not strictly required - AD works just fine without this, I just like to have it.

- Join all machines to domain except for Edge Transport - remember that Edge is not supported as a member of the corporate forest. Edge also isn't supported in the corporate intranet, but we're just doing a demo here, so we'll let that one slide.

- Update all machines via Windows Update. My scripts all assume Windows Server 2003 Service Pack 2 and all required updates.

- Make sure that the site configuration is set such that our local subnet defines the site. This is most important if you are going to have an expanded lab with multiple sites/subnets.

- Log in as the Enterprise Administrator (to ensure Schema Admins permissions. Insert the Exchange 2007 SP1 DVD in the domain controller. Execute the command from the DVD:

- While still logged in as the Enterprise Administrator, execute the following command from the DVD:

- Create Exchange Administrator user (ExchAdmin), set user to be a domain admin (LAB SETTING - this allows the user to be local admin on all machines so he can install Exchange - this user needs to be a local admin on all machines and that can be accomplished in ways other than making this user a domain admin if needed). Remove user from "domain users" group. Add this user to the "Exchange Organization Administrators" group.

- Set the domain name on the Edge server to "techready.lab" to match the internal name of the lab.

- Register the IP address of the Edge server in the internal DNS. (DNS is set to secure update only, and this machine is not a member of the domain).

- Network configuration on the CCR nodes:

NOTE: That says "R1" and "R2" on the end, not "N1" and "N2". This is for the "Enable-ContinuousReplicationHostName" cmdlet where we need unique names for cluster resources to force our continuous replication across our management network.

PowerShell provides a fairly simple way to read data from CSV files. When reading a CSV file in PowerShell, an object is created that represents the file. This object can be "looped through" to examine each line of data, with the first line defining attributes on the object that can be read. For instance, I could read the ScriptSettings.csv file into an object called $ScriptSettings, and then access the product key defined in that file by the variable $ScriptSettings.ProductKey based on the definitions laid out below.

Each of these files is detailed below by describing what each element is. Actual format, as CSV files, is that the descriptive name of each element is in the first line of the file, with the various attributes to be given to the install script on each line below. Take care to ensure that the right attributes line up in the same order as the "header line" in the first line of the file.

Note that if the lab is built with the machine names and IP addressed defined in the diagram above, the included CSV files will work without changing.

Also note that during execution of the script, it is assumed that the CSV files will be located in the same directory as the script itself.

After all that, if you are still with me, you are probably wondering where to get the script and those CSV files? Right here.

Finally, I hope you found this useful. If for whatever reason, you create a tear down Exchange 2007 labs or demos often, this should save you quite a bit of time in the long run!