Turn on suggestions
Auto-suggest helps you quickly narrow down your search results by suggesting possible matches as you type.
Showing results for
Show  only  | Search instead for
Did you mean:
Ask The Exchange Perf Guy: How do large item counts & IMAP clients affect CAS CPU in Exchange 2007?
By

We recently updated our maximum item count guidance for Exchange 2007 when IMAP clients are being used. As a result, I've gotten a number of questions about the reasons for the change. Hopefully this post will help to answer those questions.

In Exchange 2007, the product went through some major architectural changes that resulted in various components that had previously been closely tied to the store.exe process being decoupled and moved to the middle-tier Client Access Server role. This included the IMAP service. As part of this move, the IMAP service was completely rearchitected and rewritten which has resulted in a different performance and scalability profile from the behavior exhibited by Exchange 2000 and 2003.

Along with differences in the performance and scalability profile from prior versions, the growth of user mailbox size that has occurred alongside reductions in storage cost has resulted in observations of excessive CAS CPU utilization by the Exchange 2007 IMAP service when operating on folders containing a large number of items. In Exchange 2007 SP2 RU2, the product team released some new functionality that can be used to log user activity through the IMAP service operating on folders with item count over a configured threshold. See KB 969948 for more details.

Exchange has provided item count guidance for various product releases, and this guidance has usually been associated with MAPI clients such as Microsoft Outlook accessing "critical path" folders like the Inbox and the resulting effect on disk I/O and CPU utilization of the store.exe process. Given the level of interest in access to high item count folders with IMAP clients, which primarily affects CAS CPU on Exchange 2007, I performed some testing to characterize CAS CPU utilization and provide a data-based recommendation on the maximum number of items to store in folders used by IMAP clients.

For each iteration of the test, the LoadGen workload was tuned to generate enough load that the CPU utilization on the CAS server was > 60%. Low CPU utilization can result in misleading results when attempting to normalize CPU utilization to specific operations or overall sessions. The workload was adjusted by tuning the number of users simultaneously accessing the server running the provided script.

Additionally, the initial delay in starting each simulated user was tuned in order to generate the cleanest "steady state" possible. The number of simulated users was slowly increased by adding additional client machines to the mix until the target CPU utilization level was achieved in steady state. The test was run for at least 1 hour in steady state to collect performance measurements for analysis and then the next iteration was run. Performance data representing both the workload as well as the effect of the workload on machine resources was collected from both the CAS and Mailbox servers.

Before looking at the actual performance results, the number of user sessions that were run for each of the iterations clearly demonstrated the dramatically increasing impact of high item count folders on the system. While determining the primary cause of the impact, I ruled out mailbox server bottlenecks due to I/O, CPU, or network. Additionally, I/O and network bottlenecks were ruled out on the CAS server as well. The CAS server was not under memory pressure for the duration of the tests, and .NET garbage collection activity was minimal (i.e. not a significant contributor to IMAP process CPU). The CPU data from the CAS server clearly demonstrates the effect of high item count.

In order to make each iteration comparable, I normalized the data first to megacycles per IMAP session. A megacycle is a unit of work equaling one million CPU cycles. A 1 MHz processor would process a megacycle every second. Due to various optimizations in modern processors, clock speed is not the only indication of a processor's ability to process a megacycle in a given period of time when comparing to other processors. In this case, all of our measurements were obtained from the same type of processor (actually the same physical processor), so the results are comparable between test iterations.

Here's what the megacycles per IMAP session look like when plotted on a log-log graph: 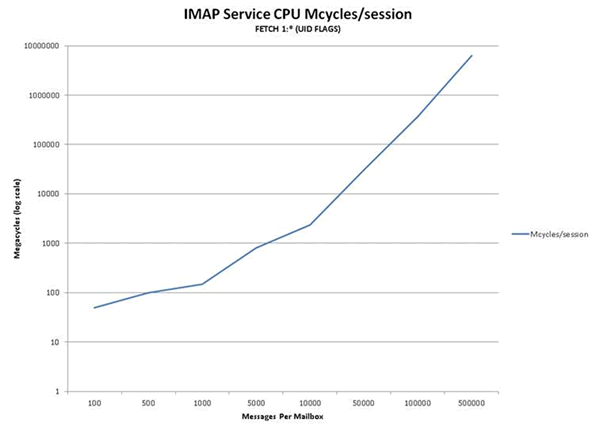 Note that the y-axis (the vertical axis) of the graph is on a logarithmic scale (as is the x-axis given the item count values that were selected for the tests) - the curve of the graph is much more noticeable on a linear scale, but it makes the lower end of the scale harder to interpret. As one might expect, a session where we process higher item counts costs significantly more than a session where we process lower item counts. Not terribly surprising.

It's far more interesting to normalize the data to a smaller unit of work - specifically megacycles per message in the folder being processed. Since we are primarily concerned with the impact of each item that contributes to the high item count, this would be much more meaningful than megacycles per session. Obviously there are some fixed costs associated with maintenance of an IMAP session which will occur regardless of item count, but given that the costs rise so dramatically as item count increases (as seen in the megacycles per session graph), it's clear that the per message costs will dominate.

Here's what the megacycles per message look like when plotted on a graph: 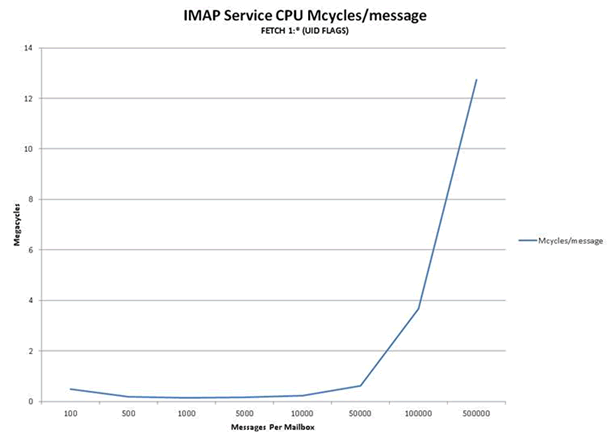 In this graph, the y-axis is linear rather than logarithmic. As the graph demonstrates, the CPU cost per message in the folder being operated on is basically linear until 10,000 messages. In fact, the cost is slightly higher in the extreme case on the left where the fixed per session costs for the IMAP service likely had a bigger impact. After 10,000 messages, the per message cost begins to rise rather dramatically, suggesting that the overall scalability of the service is impacted.

Given that the IMAP service in Exchange 2007 appears to scale well on a per message basis up to 10,000 messages per folder, we recommend a maximum of 10,000 items per folder for users who are utilizing the IMAP protocol to connect. Users who are not using IMAP should follow the other published guidance on item count for Exchange 2007. The test data does suggest that there is only a moderate increase in per message cost between 10,000 and 50,000 messages, but it is also important to remember that the per session cost increases dramatically between 10,000 and 50,000 messages. This means that the duration of this activity for a given IMAP user on a CAS server will be significantly longer, and when multiple users are accessing the system this can easily lead to CAS CPU capacity issues.