Administration of Public Folders with the introduction of Exchange 2007

For an administrator who manages public folders in their Exchange organization, the introduction of Exchange 2007 poses somewhat of a dilemma as to how to administer public folders that exist on Exchange 2007. There are however some easy ways to complete regular administrative tasks using the combination of previous versions of the ESM, Exchange Management Shell as well as PFDAVAdmin tool.

NOTE: This blog post does not talk about upcoming Exchange 2007 SP1 Public Folder user interface added to the Exchange Management Console. We will blog about that separately. For more information on Exchange 2007 SP1, please refer to the following blog post: http://msexchangeteam.com/archive/2007/02/23/435699.aspx

Let's go through some common scenarios:

1. How do I discover where replicas of a public folder exist?

It is important to know where the replicas reside for purposes of migration, pubic folder referrals and backups. You can determine where the public folder replicas are from a number of different places: 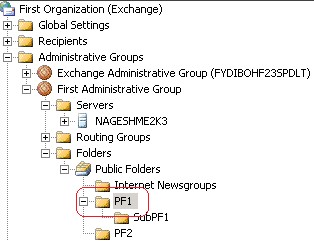 This is also where you can add or remove Exchange 2007 server's public folder store as a replica.

As a best practice, include the servername in the public folder store name to avoid confusion.

When migrating public folders, the hierarchy and the data must be moved to the new Exchange 2007 server before the existing server can be decommissioned or the data will be lost. Replicas can be added to folders individually through the Exchange 2003 ESM but can be done more efficiently as follows: 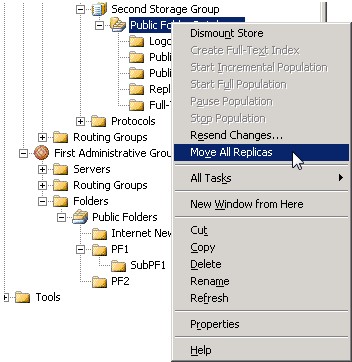 Note: Scripts are found at %SystemDrive%\Program Files\Microsoft\Exchange Server\Scripts. To run a script, type the following in the Exchange Management Shell:

3. How can I tell if public folder data has replicated to Exchange 2007?

Before we remove the last Exchange 2000/2003 server, we need to verify that the content has been fully replicated to prevent data loss. The easiest way to do this is through Exchange 2003 ESM. Browse to each server and look at the public folder instances. You will be able to determine what data has replicated to the Exchange 2007 server by comparing the size of each folder. 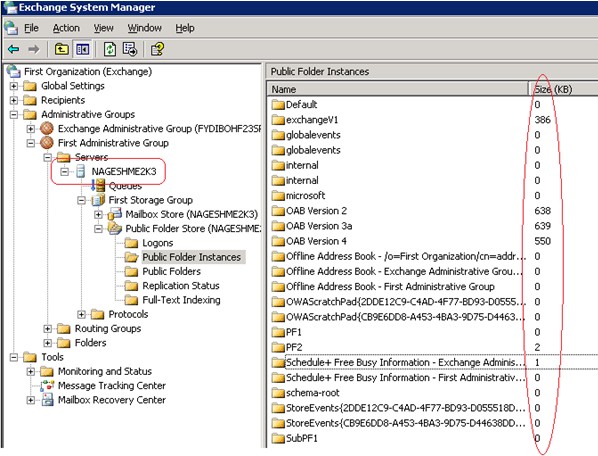 You can do the same for an Exchange 2007 server.

You can generate information about public folders and system folders in the Exchange management shell. To see details such as item count and last access time, use the following CMDlet:

This information will help compare content replicated between the source and destination servers.

Additionally, you can also use the PFDavadmin content report functionality.

4. How can I force public folder replication to Exchange 2007?

To initiate hierarchy and content replication, use the "Resend changes" and "Synchronize content" options in Exchange 2003 ESM. Read more about those here.

Use the following Exchange Management Shell script to push hierarchy from a 2007 server:

Use the following Exchange Management Shell script to push content from a 2007 server :

Of course, you can read more about CMDlets used above in Exchange 2007 documentation.

Things should wok similarly well with Exchange 2000 in the mix, yes. There were a few features that were named differently in E2000 ESM though.

As far as Interorg PF relication - just use the Inter-Organization replication tool:

You may install it on a machine where only E2007 management tools are installed if you install the MAPI client too:

0 Likes
Like
Not applicable
I used the command line below and it worked like a champ on 2000>2007.  I'm not clear if it will move the system folders so may have to do that manually the old way by adding the replica.  That is OK there are way fewer system folders than user folders!

Moveallreplicas.ps1 –server<sourceserver> -newserver<destinationserver>
0 Likes
Like
Not applicable
There is way to little info on the 2000>2007 migration process. this is quite idiotic since there will be more people using 2000 willing to upgrade early than those using 2003. Even Technet has little to no info on migrating public and system folders from exchange 2000 to 2007.


And Kyle is right, but "MoveAllReplicas.ps1 must be ran from the scripts folder even though the scripts folder is in the path.
0 Likes
Like
Not applicable
Hi guys. Regarding the Moveallreplicas.ps1 script, exactly what effect will this have on my old production system? I have an Exchange 2000 server with about 150 users, and a new Exchange 2007 server with nobody on it yet. If I run that script, will it simply enable replication of Public Folders (which hasn't started yet after about two weeks), or will it MOVE them? What I mean is, can I run that script safely without the fear of my users calling me up and asking where the heck their Public Folders disappeared to?

I've been reading the docs and trying to figure this out to no avail.

The Moveallreplicas.ps1 indeed MOVES the replicas from one server to the other. Actually, it just updates the replica list on folders that you run it on and then the public folder replication takes care of the rest. The end result though could be that replicas could be moved from one server to the other, and original server would have no more replicas.

Note though that your clients should still be able to access the PF content even in that case. You can test this by creating a folder on E2007, with replica on E2007 only, drop some content in there and see if E2000 clients can access it.

If you need to just add a server to the replica list, check this page out:

http://technet.microsoft.com/en-us/library/aa997966.aspx
0 Likes
Like
Not applicable
I like the technet article, that "Exchange" posted, but now that adds a little to my confusion.   In that link under the description for Moveallreplicas.ps1 it has this for the "Server" paramter (not the NewServer paramter)

Server   (Required) This parameter specifies the server to remove. This server must be an Exchange 2007 Mailbox server that contains a public folder database.

Is the Moveallreplicas.ps1 really intended for migrating mailboxes from one version of Exchange to another??
0 Likes
Like
Not applicable
I have Exchange 2K going to E2K7 and I added the E2K7 server to the replica list of each top level folder and then propagated the setting down.  The issue is that not all the content has come over.  Some folders have partial data and others have none, but the replica exists on the folder.  Any Idea?  I have tried removing the replica and added it back.  Also adding new data, but in one case only the new data replicated.
0 Likes
Like
Not applicable
Ditto comments on E2K -> E2k7, with emphasis on this group being early adopters.  (want to see my scars?...)

Maybe I can help -- and get help -- regarding migration of PFs.

1. It seems that MoveAllReplicas.ps1 has worked for many of us.  But does MoveAll... also move PF contents? (IE - does it force a replication, or 'content update'?).  If not, then it would be nice to have *guidance on how to force replication* from E2K server.

2. This blog post provides helpful instructions but they reference "...Exchange 2003 SP2 version of the ESM".   Please provide  similar *instructions for cases where only Exchange 2000 ESM is available*.  (Or is it perhaps the case that I should install 2003 ESM on my 2000 server??)

3. After MoveAll..., then what?  Can I simply delete the instance of the folder on my E2K server?  Or is there a 're-homing' function that must be done first?