Using what if analysis how do I take in a column of values,increase them by a fixed percent,and output them too another column of the same length

That's a question that could have many answers. At the very simplest level, you want to use a field off by itself to enter that variable  percentage. I've attached a simple example. Please come back if I've missed your actual need. 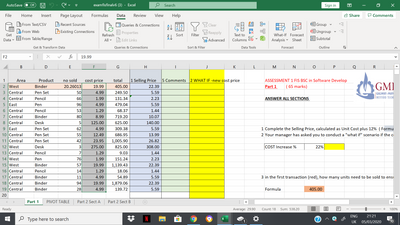 Thank you for taking the time too reply this might be give you a better indicator of what im trying to do,I want too populate the yellow column with the unit price value increased by  f12,the box with the 22% in it

@mathetes  using what if analysis that is

So this looks like a homework assignment of some kind. Right?

In any event, I think the sample spreadsheet I provided above should give you the answer in terms of how to approach it. You'd have to adapt the formula to your specific sheet. (FWIW, an image is not all that helpful in requesting help on these pages; we almost always prefer a sample of the actual sheet.)

@mathetes  no no no,it was an exam we did on tuesday and im now going over the parts  I did not get and trying too figure out how to do them,but I just I fundamentally do not understand how to do this with what if analysis and

I understand that this something best figured out on my own,but does the scenario manager suffice for this? or am I supposed too be using goal seek or data table? or even if their any resoruces youd be able too point too because even after reading on the microsoft office page for what if-analysis im still not fully sure what to do

You may be making "what-if" analysis more complicated (in your own mind) than it is; certainly more complicated given that sheet you showed. In that case (unless there was more there than you were asking about) the "what-if" was just a matter of "What would happen if we charged XX% more for the goods? And then, what if it were YY%? How about ZZ%"

And a question like that, or a series of questions like that can be answered quickly by just changing the one variable in its own little cell. Did that not work in the sample I uploaded?

Goal seek and some of the other tools can also be used to answer questions along these lines, but it didn't look like that was needed in your initial question. As I said, though, if you post the actual sheet, some of us can look at it.

The other thing, after the fact, would be to go ask the teacher or teacher assistant. That's what they're there for (supposedly). There's not a lot I can point to other than some of the many books on Excel--I used to read the manuals (back in the day when there were such things); but I'm a natural geek, and realize that doesn't work for everybody.

How familiar are you with the basics of Excel?

Celebrate World Spreadsheet Day with the Day of Data!