The last couple of days I've been attempting to count the number of instances in a given month listed on a table.

The equation that I'm using is SUMPRODUCT(--((Month(Tracker[Date Closed])=1))).

The good news this is working for every month...EXCEPT January. In testing, even when I deleted all of the data there is still a total of 1 showing up for January, although ironically, when I add data back in excluding January all of the other months show up correctly and January reverts to the correct number 0. If anything, when data is deleted it seems like the January count is counting the number of existing rows on the table even though they're blank. 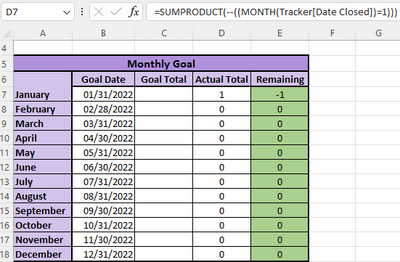 Re: SUMPRODUCT Error by Month

Count Dates Per Month in a Range of random dates.