I'm trying to do a look-up between two sets of SKU/quantities which do not have entirely the same SKU information between the arrays. 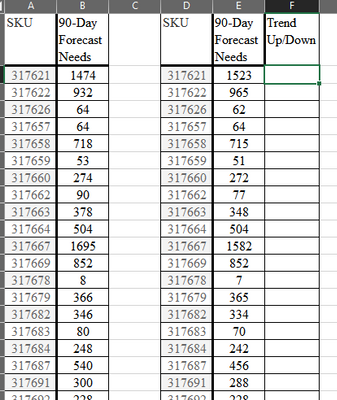 As long as the fields between both sets of SKUs are the same, a simple XLOOKUP does the job handily for giving me a difference between them:

Once I get to a point where the SKUs don't align, the sums go crazy wrong.

What I want to appear in that Trend cell is for the difference (either +/-) between the 90DFN cells in each array where the SKU is the same in both arrays.

Re: Summing across XLOOKUPs

Re: Summing across XLOOKUPs

Well, that's what I get for not thinking the process out further than trying to cram it all into one formula field! LOL Thank you, Hans!
0 Likes
Reply