Secondary Axis not working on Mac

Secondary Axis not working on Mac

I'm not able to add a secondary axis on a Mac. I've read the various help articles and discussions at:

and they don't address my issue, which is that the option just isn't available. I've attached screenshots of the menu and format panel (note that the data series is selected in both of them), and the spreadsheet itself. Help?!?

Re: Secondary Axis not working on Mac 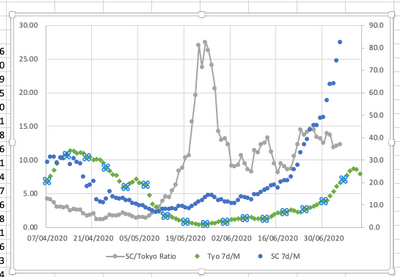 Is that what you had in mind?

Re: Secondary Axis not working on Mac

Yes, that is roughly what I had in mind, although the line/scatter inconsistency is an artifact of the experimenting I did trying to get this to work. It didn't work when I had three scatter series, either.

However, I see roughly the same results you do: I can put the green and/or blue series on a secondary axis, just not the grey one (regardless of whether any of the series are line or scatter). This is particularly stupid because since the grey series is just the ratio of the blue to green, it really is mathematically secondary. Whatever. I can get roughly what I want. Hopefully the Excel team can remove whatever restriction is preventing me from being able to do it in a way that makes sense to humans.

Thanks for your help!