Once again I seek the knowledge of the community.

So I have this self compiling list in column F that has been made by the formula =FILTER(A1:A479,C1:C479="Y") and in G via a almost identical formula but to pull the values in the same row, as can be seen in the image below. 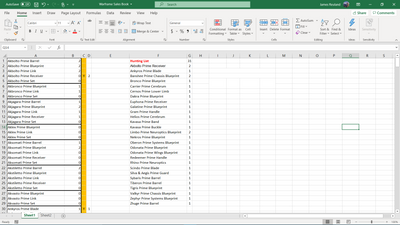 Now I have THIS website that has the same information I have, in a boxed style like used in excel, that is split between the columns labeled Item and Part. What I've done is taken the information and made it to pull the data to into sheet2 with the columns Item and Part together Renamed as Item, so it matches the same thing I have on my list on sheet1, changed Tier to Relic Class, Name to Relic ID and set the data to automatically background refresh. This all can be seen below. 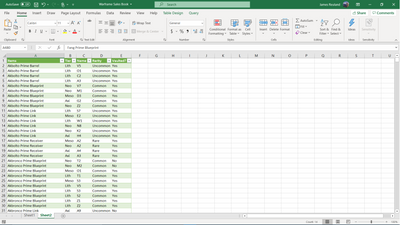 Now what I want to do is essentially trying to create a filterable search list that interlinks the two in a matter of speaking on sheet1. Below you will see the box outline created where I want to put this. 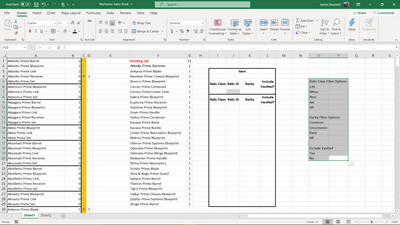 The merged box spanning from boxes I4-L4 will be a drop down box that consists of the the items that are in column F. I then want to have each of the boxes in row 7 to be a drop down filter option corresponding to that labeled in the box above with the options listed to the right (There for explanation and not in the final product). Then the 20 boxes below the second set of labels would then would display a list of sources that meet this criteria. If possible I'd also like to be able to make so if I leave the item box in I4-L4 blank it will leave the result boxes blank like they show in the above image.

I need help with the "specific" function or creating a Macro, Help Please!!!