i posted something prior but i think i confused the matter. maybe this clears it up

i tried multiple ways and im left at this

it just isnt working in so many ways i try. is this possible without vlookup? or offset? i have a big sheet so i just would love to have some direction on how to achieve this problem

I think this is still pretty confusing. You'll need to come up with more examples under varying conditions to make your underlying heuristic (rule) unambiguously clear, before it can be turned into a reliable formula.
0 Likes
Reply

if a player gets ball in hand in the same inning as his win then i want to count.
0 Likes
Reply

You still are leaving many things unexplained. You think they're obvious things, which is why you don't think they need explanation. But they do.

You think you gave a full explanation to @Harun24HR in response to his question. But you actually gave only a partial answer.

Fill out your online sample sheet with more data, realistic data, and give more examples of what the rules you're wanting to program would yield.

most of me thinks if i explain the question more it might confuse some but im going to attempt here.

i really appreciate everyones assistance. im trying to achieve this with just a formula and not adding additional columns to count like a helper column.

lol your help did not go unnoticed thank you very much for the assistance. i hope my explanation makes more sense. i have been messing with this for days now. i keep thinking i figured it out. nope. i just need the inning to equal the same inning as wins & ball in hand. but i dont know if i can have that number of inning be different and count. im trying arrays
0 Likes
Reply

@rangelsammon Just to clarify, is it a requirement that the "ball in hand" and "win" are NOT in the same row?  Sorry if you answered this already.

I can see by example 1 (Game 2, Inning 2), they are on separate rows.  But doesn't row 9 meet the criteria of winning within the same inning (Game 1, Inning 1) after getting ball in hand?  You mentioned John's tally would increase if B9 changed to 2, however, it's a separate game so this is what's confusing me.

I think I have a solution, I'm serious this time, but completely different approach than last time. 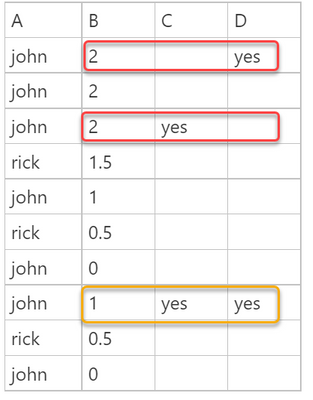 Since @DexterG_III thinks he has a solution, I'm going to wait and see what he comes up with.

In the meantime, may I do you the favor of pointing out one key feature that might explain some of the confusion here: it was only in reading this final description that I realized the history of this game goes from the bottom up!! I do believe it would be "normal"--though I may be just making a massive assumption--based on history of transactions (the kind of database with which I'm most familiar) when dates are entered they typically begin at the top and go down as history progresses. In that manner, I would expect the game--its scoring, its innings, its whatever-- to begin at the top and proceed downward.

And if I'm not mistaken, those numbers in Column B actually have no direct relationship to the scores; is that right?! They're just time markers (innings)...

Beyond that, what you've explained is how the "yes" entries get made. What I was looking for, and perhaps it's @DexterG_III 's explanation that does this--what I was looking for was a clearer explanation of how you waned to go from the data to the results you want; not an explanation of how the entries got there in the first place. I was looking for clarity that begins with the data--whatever it represents--the rules that would underly the formula, in other words. The rules that would answer the questions you got at the start and explain how you got the ones and twos for John....

Does that make sense? Or am I just adding confusion of my own?

correct column B has no relationship to the score. it only states the in ing the shot/moment occured.

it makes sense what ya mean. overall. i wasnt clear but im thankful for the community here
0 Likes
Reply

@rangelsammon Okay this is not a formula but I do believe it calculates the correct count.  The TableIn Query reads the table data and filters all rows only for wins = yes.

The TableOut query does the same except with BallInHand = yes.   The 1st table is then merged with the second looking for a match on all three critical columns.   If a player has both a BallInHand = Yes and a Win = Yes for the same game and the same inning, then it returns a 1 in the count column.  As we know, this could return multiple rows so the last step is to group by player and sum the count column.

The bad news is you must press the refresh button on the TableOut query in order for the summary (K1:L2) to be updated.  The good news is the refresh could be automated via VBA based on cell updates or something similar.

I know you're looking for a real time formula and it's possible someone else can provide that answer.  As a backup, this might work.

thanks again for your assistance. ya i really would love a formula in real time but your assistance means alot. i think im going to resort to a conditional(helper) column to achieve the count

@rangelsammon No worries.  But if you can deselect my response as an answer please do if it's not what you were looking for.  I know there are many in this forum with skills greater than mine and willing to help.  I assume many will filter for unanswered questions.   If you're looking for that formula, your best shot is to keep this thread open and I'd take no offense in you doing so.

btw, i ended up doing conditional argument vs counting in one cell.
0 Likes
Reply