We have a job register that now consists of over 3000 rows.  It is a critical part of our business.  The first column consists of the job number and all other columns are relevant to the specific job.

can you share the workbook with the numbers i'm sure the numbers are not confidential just replace the job names with job01 job02 ..etc

@Gizwol79 Combining the "RE " and a number creates a text. So, now you are sorting texts and "RE 101" gets sorted after "RE 1009" just like "AB" would be sorted after "A" but before "B". To avoid this problem, all the codes should have the exact same structure. For example "RE nnnn.nn", meaning RE followed by 4 numbers, then a dot and then 2 more numbers.

But for now, to sort the rows back into their original order, you need to split the RE-codes into three segments, so that you get 3 columns one with only "RE ", another with numbers 1 to 1486  and a third one that may contain numbers 1 to 99.

First save a copy of your current workbooks and work on that one. Insert three columns to the right of the column with the (now incorrectly sorted) RE-codes. Copy the original RE-codes to the first inserted column and select it.

On the Data ribbon, choose Text to Columns. In step 1, choose "Delimited". Next. In step 2 choose "Space". Next. In step 3, in the preview window, click on the second column and select the Text button. Finish.

Now, do something similar with the second column that contains the nnn.nn part. This time, select "Other" in step 2 and enter a dot as the delimiter and in step 3 leave the data types at "General". Finish. 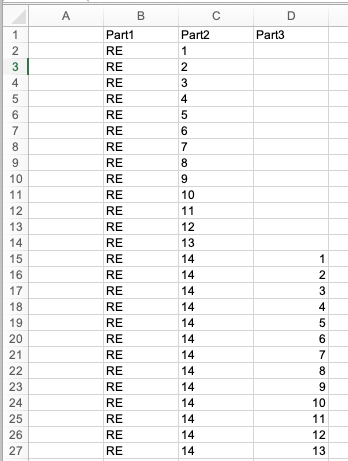 If you want, you can now re-structure the project codes by combining the three columns like this:

Sorting an Excel table when it contains Named Cells

Similar - "Unique Function" on version Excel 2019 and below

Stacking spread out cells in Excel 2019