I'm trying to recreate a data validation that works in a different workbook. I have a column of data on a separate worksheet titled dropbox. My data validation formula (which is the same as the other worksheet but this one doesn't work) is =dropbox!A1:A10. I receive an error saying it's not a valid reference. Change the reference to a single cell, or use the reference with a worksheet function such as =SUM.

This worked in a previous spreadsheet, why won't it work here?

@rhancock Yes, I know that part. But why won't that work as the source for my data validation? It kicks back an error message.

@Karin5281  that error message sounds a lot like this case: 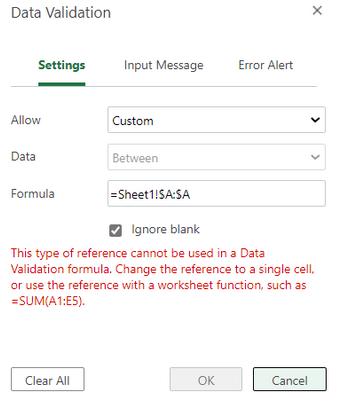 If this isn't your problem, can you share the workbook?

@mtarler that worked! Thank you so much.

How We Built the College Basketball Prediction Spreadsheet in Excel

🏈 Fantasy Football Draft materials brought to you by Excel! 🏈