I'd like to create a function that reads the currency and converts it into a prefered currency if necessary.

For example, I have a table that includes a column with prices in different currencies (CHF and €).

If the price is in Euro I want it to be converted into CHF according to the defined exchange rate.

So far I got the following code:

Does any one know why this is not working properly? As a solution I always get CHF -, so it converts the currency but it doesn't do the math.

Thanks for any advices

@ExcelDIY Any particular reason why you want to use a User Defined Function for this kind of basic operation? A simple IF statement will do. See picture below. 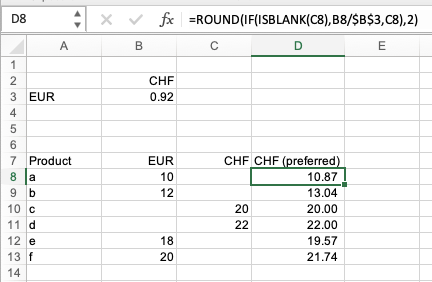 Get spot prices for Gold and Silver using Stock converter