Using IE Mode in Edge for a Legacy Silverlight Website we still use. Site loads fine in IE 11 by itself but when I open in IE mode it has this black bar at the top of the page

If anyone knows why this would be happening it would be greatly appreciated. Below is my ie diagnostics. 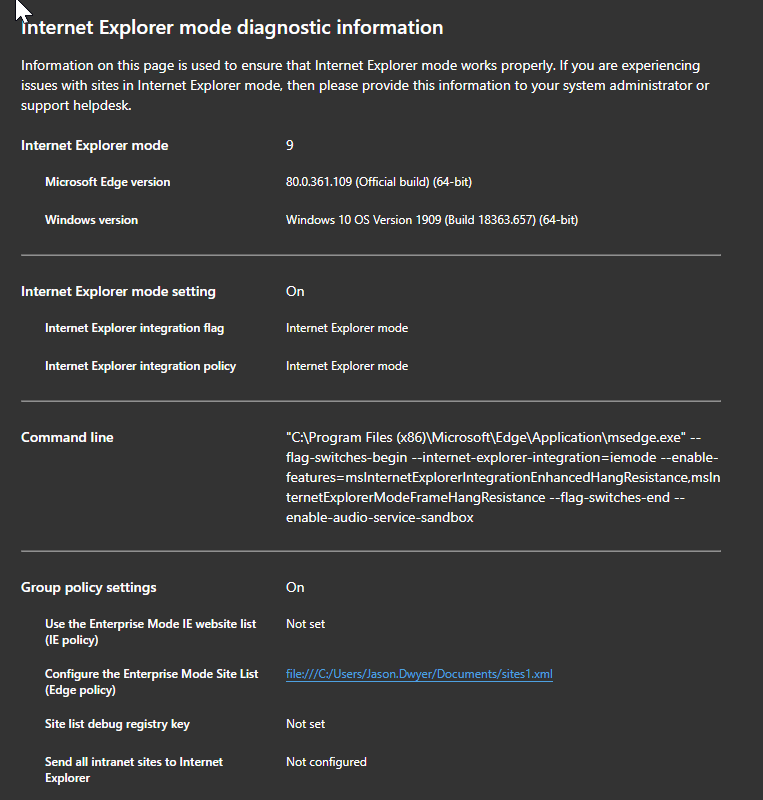 @jdwyer Thanks for reaching out, and welcome to our Insiders community! We're sorry to see that you're encountering that, and we appreciate your willingness to share diagnostics.

If you haven't yet, can you please submit detailed feedback and diagnostic data through the in-browser feedback tool? This will help our devs pinpoint exactly what the underlying issue it. (And if you mention "Fawkes" in your comments, then let me know when you submit it and I'll direct it to the right team.)

@jdwyer I've noticed the same behavior with other websites (not Silverlight) as well, eg. our on premise SharePoint running in IE mode.

Is there already a solution to this issue in the pipeline?

@jdwyer @Deleted @SimonHessBZP I don't know if others are still having this issue, but I've been able to recreate it 100% of the time with Windows 10 2004 (new image) and Edge-C version 83.0.478.54. It doesn't seem to happen on administrator accounts but only on standard user accounts. At least in my testing it seems related to the menu bar in IE11.

We have the GP "Turn on menu bar by default" enabled in our environment. I used a test PC with a fresh 2004 image and current stable build of Edge-C. Admin user account never had the issue popup, even after having IE11 opened, and favorites imported. Test non-admin user would not have the issue until IE had been opened at least once since account had been created on the PC. Once IE11 was opened, any IE-Mode tabs opened would then 100% have the black bar across the top.

Moved the PC to a test OU in which I disabled "Turn on menu bar by default" in the linked GPO. Restarted the PC, logged in as non-admin user, and the black/white bar never showed up.

I then changed the policy to not configured to allow on-demand enable/disable of the menu bar in IE. Restarted PC and logged in again as non-admin user. Whenever the menu bar was enabled in IE, the black/white bar appeared, but when I disabled the menu bar it never showed up. So for those without this policy set either way, this could be why it shows up on some users and not others.

@kreivan I can confirm that disabling the menu bar solved the issue at my side. Thank you.